Introduction
Iodine (I) is one of seven generally recognized micro minerals needed in the diets of dairy cattle and other animals. Generally, more than 95 % of total iodine is accumulated in the thyroid gland of animal. It is unique among all minerals, because a deficiency leads to a specific and easily recognizable thyroid gland enlargement, called goitre. The only known roles of iodine in metabolism are its incorporation into the thyroid hormones, thyroxine (T4) and triiodothyronine (T3), and into the precursor iodotyrosines. Both the hormones have multiple functions in the energy metabolism of cells, in the growth, as a transmitter of nervous stimuli, and as an important factor in brain development (Mc Dowell, 2003). The best treatment for iodine deficiency symptoms is prevention. Nutritionists can do this through the diets of animals by ensuring that enough of the mineral is contained in the ration. 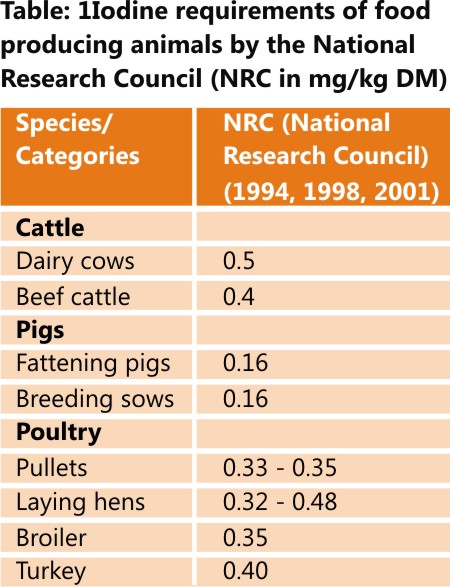 Iodine, through the thyroid hormones, thus plays an important role in thermoregulation to keep body temperature steady and even, especially when the weather is below or above the zone of thermal neutrality for the animal. During cold temperatures, more energy is needed to produce body heat to keep warm. Conversely, energy is needed during hot temperatures to dissipate heat through blood circulation, panting and sweating. Iodine and the thyroid hormones are important in the functions of lactation, muscle function, immune defence, normal blood and lymph circulation and seasonality of reproduction. A deficiency of iodine in the diets of animals can have detrimental effects on their performance. Iodine is also important and involved in the development of a foetus. A deficiency of the mineral will lead to reproductive failures. It is important to mention conditions when the iodine acts as a poison to the body. 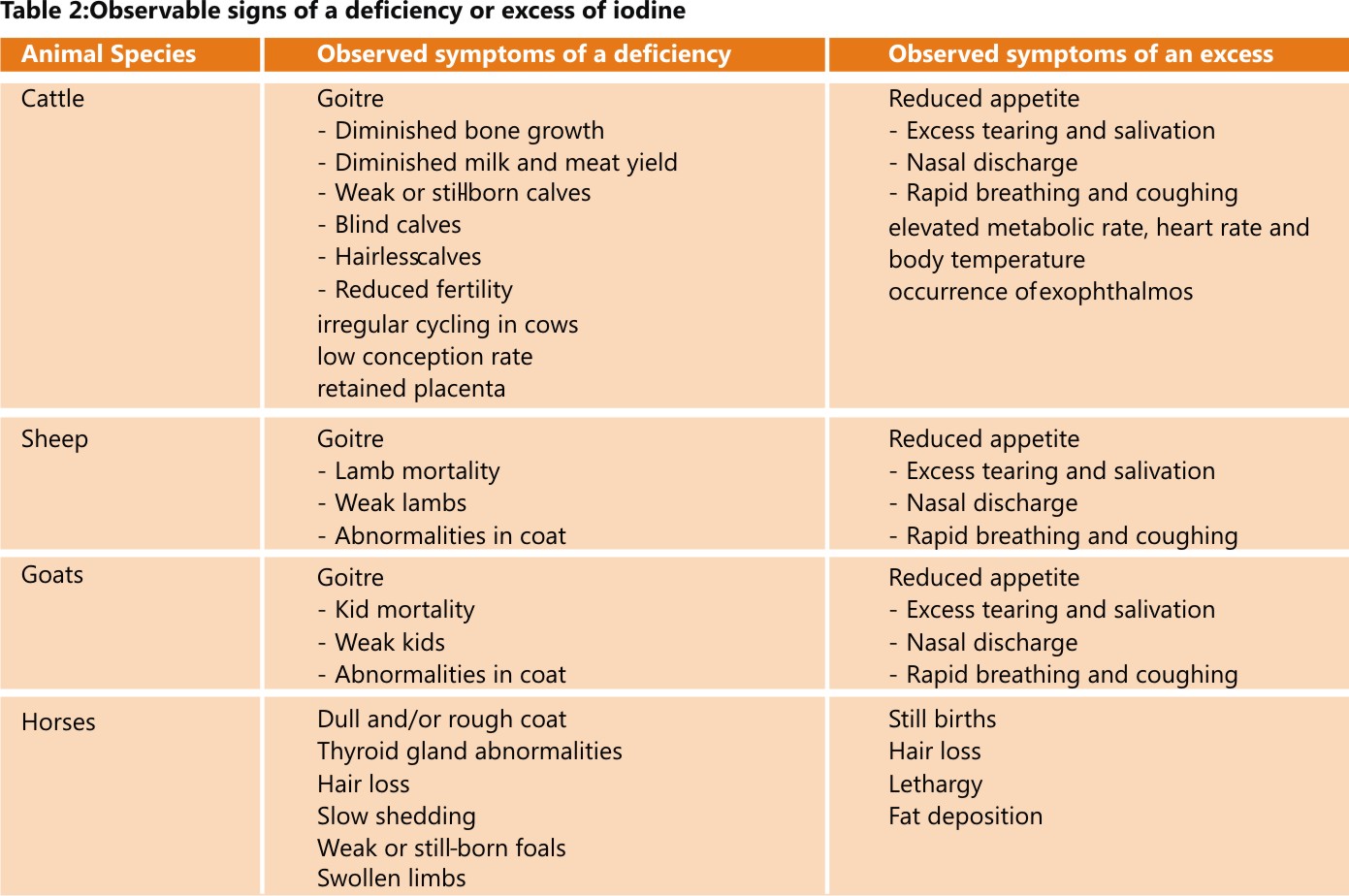 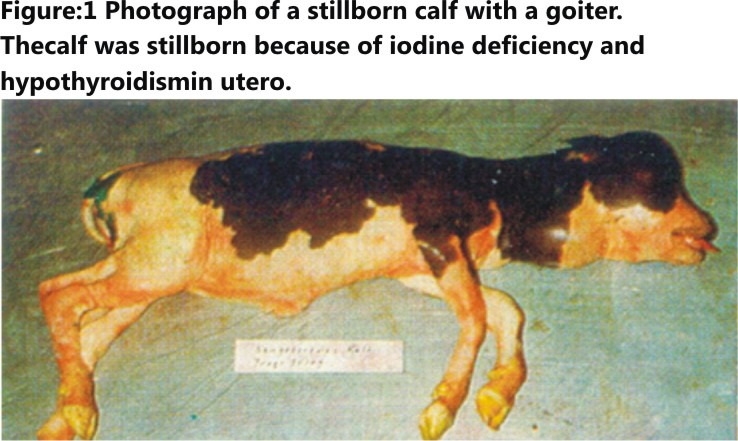 Ethylenediaminedihydoiodide (EDDI) is a highly bioavailable source of iodine. It can be used in mineral premixes to meet a portion of the needs of an animal. It is often used for its preventative effects of foot rot and pink eye in cattle. EDDI is generally recognized as safe for animals. It is limited to less than 10 mg of iodine per head per day from EDDI. Most organic iodine animal premixes contain 9.2% EDDI or 42 grams EDDI/lb. If sulphates are present in an animal feed, they may react with EDDI and release free iodine.
Iodine Deficiency
In animals iodine deficiency reduces the level of thyroid hormones resulting in hypothyroidism. Enlargement of the thyroid gland with loss of functional tissue is a sign of iodine deficiency and hypothyroidism in several species. However, unlike calves (Figure1), lambs and kids, in pigs and poultry goitres swelling of the neck is not apparent. Iodine deficiency impaired metabolic rate and growth rate in farm animals, depending on species, gender, age and level of performance. Deficiency during pregnancy has particularly adverse effects on foetal development, birth of dead or weak neonates with hyperplastic thyroid i.e. goitre.
The inadequate intake of iodine is still a topical problem in our country, because it contributes to a reduction in performance through the disturbed health of adult animals and their offspring. Severe or fatal intoxication in calves occurs after the prolonged administration of iodine at a dose of 10 mg/kg/day. Intoxication with marked and mild clinical manifestations are induced by daily iodine doses of 2.2 mg/kg and 0.4 mg/kg, respectively (Mangkoewidjojo et al., 1980). These doses are about 500, 100, 20 times higher than the daily requirement of iodine (approximately 0.02 mg/kg body weight – NRC, 1978).
Iodine toxicity
Daily adult cattle(600 kg) requirement of iodine is about 10 mg, which is necessary for the synthesis of thyroid hormones (Convey et al., 1978), i.e. 0.016 mg/kg body weight. Generally, intoxication results from the prolonged intake of higher iodine doses ranging from 70 to 600 mg per animal and day (McCauley et al., 1972; Wallace, 1975; Hillman and Curtis, 1980; Olson et al., 1984).Under certain conditions daily iodine intake may exceed the daily requirement, even several times. Iodine toxicity may be caused by the long-term consumption of a diet containing several components supplemented with iodine, the incorrect management of mineral feed admix¬tures over a long time, the use of iodine compounds over long periods of time as a feed additive for the therapy and pre-vention of infectious podo-dermatitis, a complex of respiratory diseases, actinomycosis, mastitis, and infertility.
Clinical signs of iodine toxicity
Iodism in cattle is manifested by a persistent cough, hyperthermia, naso-ocular discharge, in appetency, depression, dermatitis, and alopecia. In dairy cows, Döcke (1994)reported that iodine toxicity cause tachycardia, nervousness, loss of weight, and a high level of metabolism. Other reported signs included the occurrence of exophthalmos and infectious dis¬eases, especially diseases of the respiratory system (Olson et al.,1984), in some cases death and an increased mortality of the offspring from such dams may occur(Olson et al., 1984).In sheep, depression, anorexia, hyperthermia, cough, changes in the respiratory system, and sometimes death were reported (McCauley et al., 1972). Lacrimation, salivation, and skin lesions were not observed. 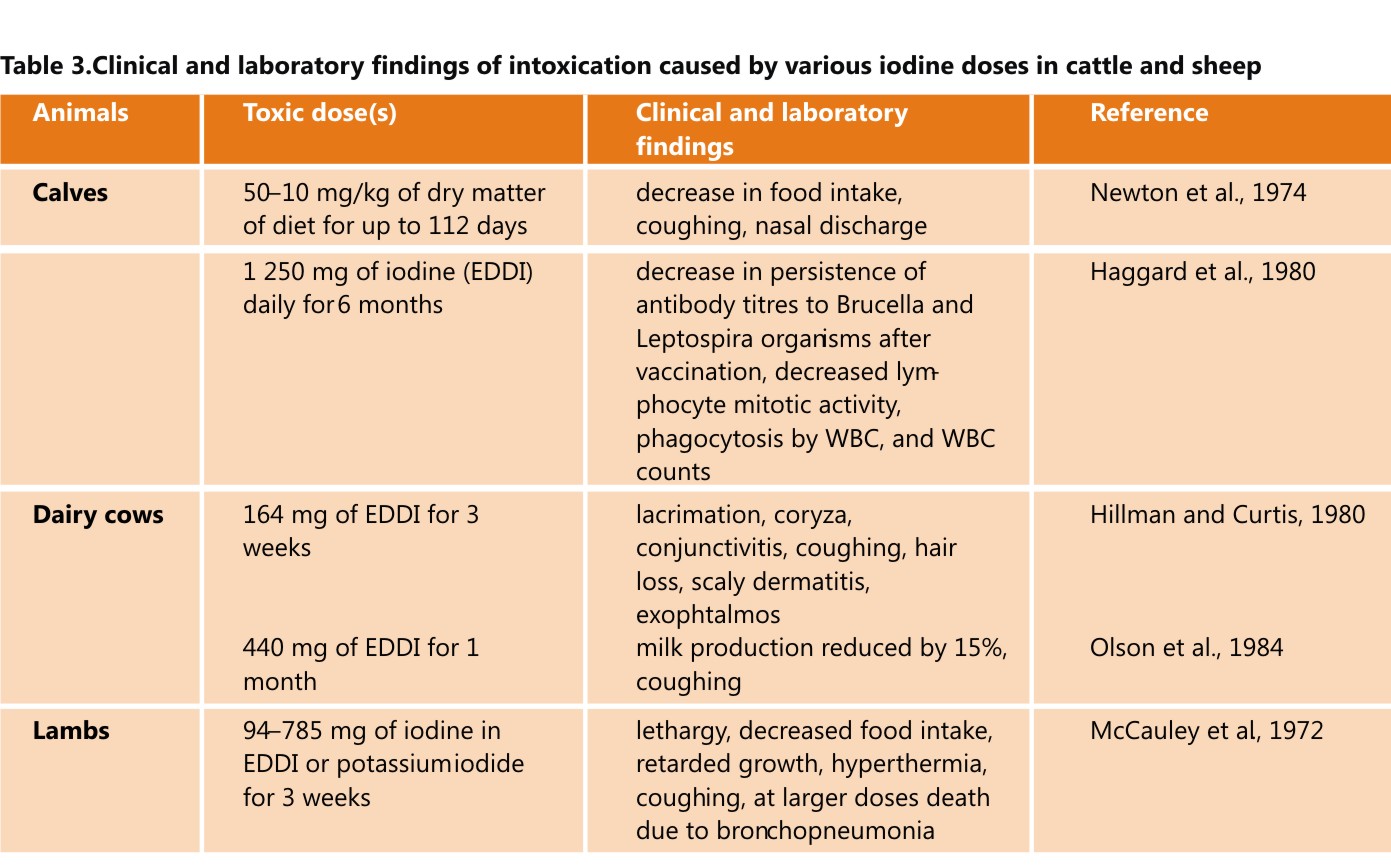