Soy beans and meal prices were relatively calm during the first quarter of last 2 seasons. However, the season 2017-18 was full of events, in a short span of four months soy bean and meal prices in Indian markets witnessed a roller coaster ride. The season started with bean and meal prices plunging to 5 year lows as the soy beans flooded in the market with harvest pressure along with burden of record beginning stocks and there after prices witnessed a V shaped recovery to trade near 2 year highs. 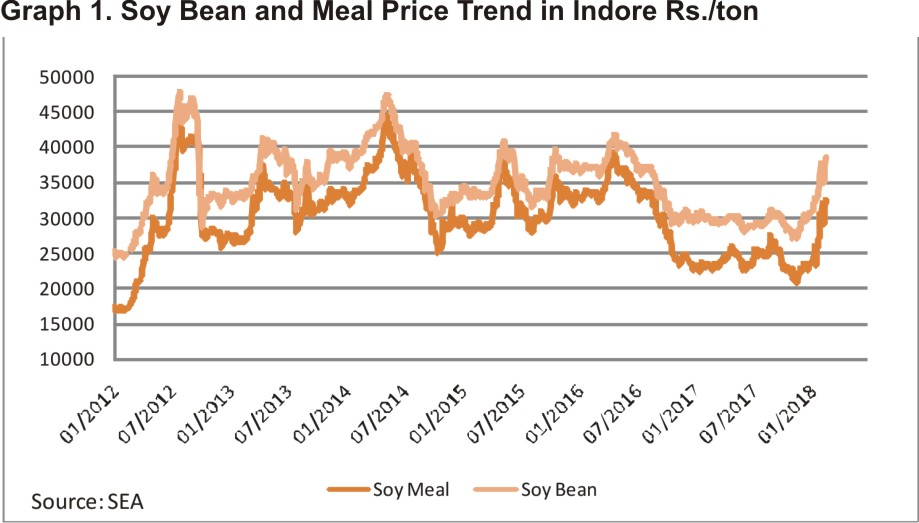 Apart from the supply and demand factors, soy bean and meal prices were also influenced by the various changes in governmental policies. These policy changes were introduced during the peak harvest season. A unique scheme of Bhavantar Bhugtan Yojana (MSP reimbursement scheme) was introduced for the first time by the government of Madhya Pradesh while the traditional Minimum Support Price buying operations were carried out in the states of Maharashtra and Rajasthan. The domestic processing and refining industries benefitted with substantial increase in import duty of all the imported edible oils. Soy oil import duty was increased to 30% and export incentives on soy meal were increased to 7% in November 2017. As a follow up, the union budget, further increased import duties on all the remaining minor crude and refined edible oils. The policy changes also included introduction of 10% social welfare surcharge on imports instead of 3% education cess which would increase the landed cost and dissuade imports.
The historic move of Demonetisation of high denomination currency in November 2016 and implementation of GST in July 2017 changed the dynamics of the price seasonality of all the agri commodities during the season 2016-17. Because the demonetisation came into force during the peak arrival season, the farmer selling were staggered throughout the season as commodity became dearer than cash and prices remained suppressed. Just ahead of GST implementation, soy bean prices fell to multiyear low, which incidentally was also just a month before the kharif sowing. This along with shift in acreage to other remunerative crops like cotton, pulses and maize, caused acreage decline for the season new season soybean for all major producing states. Low acreage by around 8% coupled with prolonged dryness in some districts of major producing states of Madhya Pradesh and Maharashtra, further reduced production estimates for the season. Soy bean production for the season 2017-18 was sharply down, year on year. Industry estimates for soy bean production ranges between 80-93 lakh tons while EAR estimates production at 93 lakh tons however, record beginning stocks due to record production during the year before managed to keep the overall supplies just off the records. 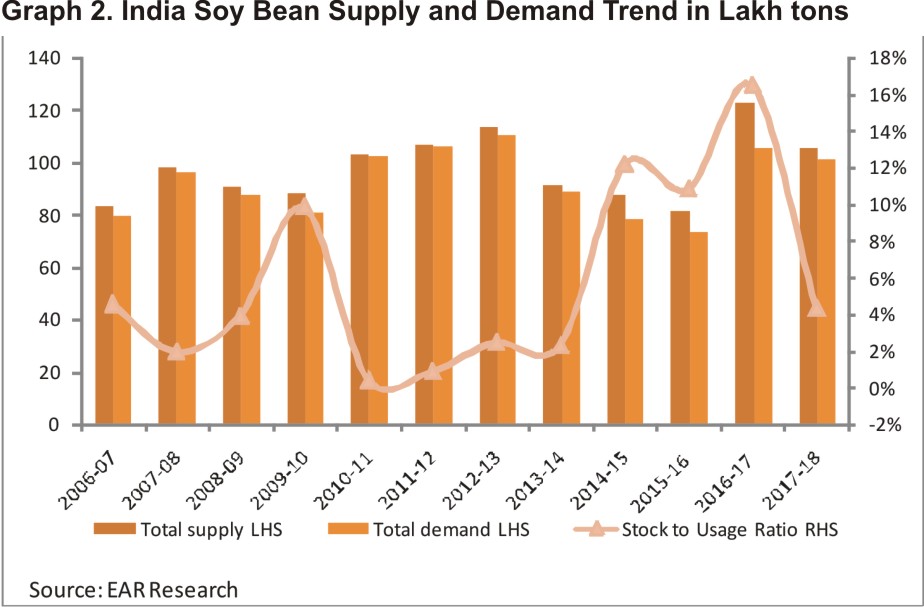 Despite sharp fall in soy bean production, farmer selling pressure was higher due to the MSP price reimbursement scheme (Bhavantar Scheme) announced by the MP government. Also the burden of record carry forward stocks since last two seasons caused distress selling in the first quarter. Soy beans and meal prices plunged to 5 year lows; this came as a boon for the crushers, stockiest as well as meal exporters. The bean crushing started in full swing with strong export and domestic demand. Export commitments were robust during the first 3 months as compared to same period during last couple of seasons. Demand largely came from traditional Asian and European buyers. With lower bean supplies year on year, possibility of current year exports to surpass last year’s total of over 2 million tons looks unlikely.
Meanwhile domestic demand for this important source of protein remained robust. The falling prices of bean and meal also gave advantage to the domestic poultry industry. With prices of eggs trading at new records and prices of raw materials near multiyear lows improved industry margins significantly during the year 2017. From the seasonal lows set early in November, soy meal and bean prices have recovered sharply. Despite the extension of the Bhavantar bhugtan Yojana in MP till end of December, farmer selling declined as the production for the season was sharply down y/y. Impending export commitments for the month of December and January kept the buying spree active from the exporters and traders.
Prices now have rallied by over 40%, but the stockiest and farmer selling has not been impressive. On the other hand, at higher levels the demand rationing is visible, especially with soy meal losing its share as protein component in compound feed industry and waning forward deals for exports. Big farmers and stockiest continue to hold on beans in anticipation of further upside in prices. Further rally in prices could be seen in two cases. Firstly, if domestic poultry industry continues to prefer soy meal along with steady exports from here on and secondly if actual production of soy beans turns out to be much lower than initial estimates. While the price gains were in line with fundamentals, the steep rally in soy meal and bean prices in a very short span in domestic market seems to be exaggerated as the global prices did not rally at the same pace. However, the story is not yet over and there is high probability that global prices would start rallying once again due to uncertainty in Argentinean soy bean production. Supplies from Argentina are expected to be tight due to reserved farmer selling in Argentina. This is expected to once again push up the global prices along with India meal prices. Production uncertainty in world’s largest soy meal exporter, Argentina continues to prevail till the harvest begins. Indian soy meal demand peaks in the month of December. While seasonally Indian demand from March onwards recedes with decline in placements with the onset of summers. There have been instances in past when the supply bottleneck in Argentina due to port congestion or delay in harvest triggers demand for Indian meal in global markets during the month of March and April. This along with domestic demand would also drive Indian meal prices higher. Weather has remained volatile throughout the sowing and growth stage. Dry weather concerns on the back La Nina weather phenomena are causing yield cuts causing a sharp decline in production estimates by various forecasters in the range of 50-56 million tons as against last year’s 57.5 million tons. 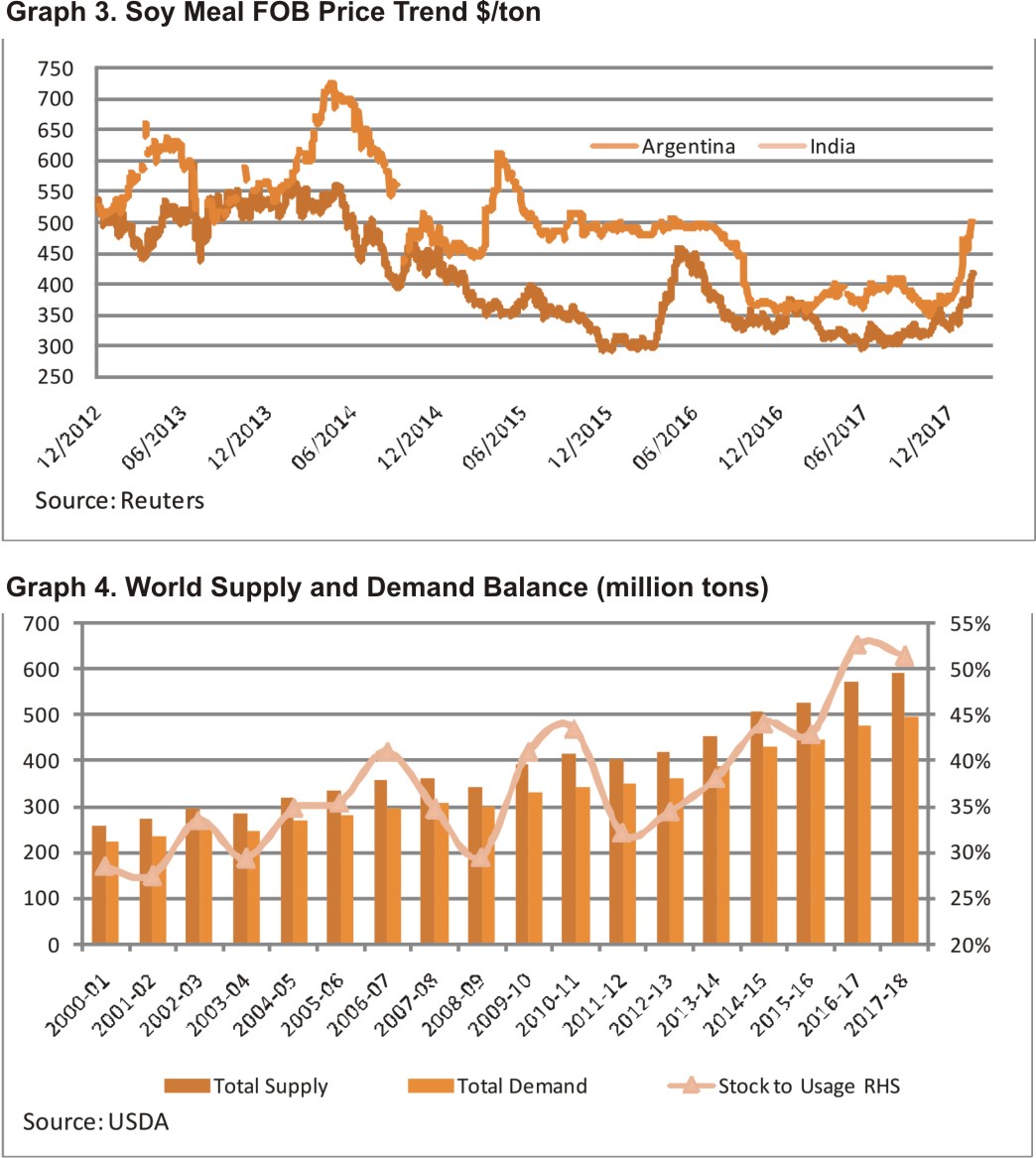 Tightening demand and supply balance sheet is the main reason behind the recent rally in prices. Going forward, for soy meal prices in domestic market to sustain above Rs.30000/ton, the global meal price will need to continue gaining. The global supply and demand balance of soy beans is just off the records, seen last year. This is primarily due to record soy bean production last year in Brazil and Argentina. Farmers in these countries are reserved sellers. Trade estimates Argentinean soy bean production at around 50-52 million tons while USDA has, in its latest report, estimated production at 56 million tons. At 56 million tons of production, the total availability in context of its use remains at third highest in this decade. However, if USDA revises its production in line with market, it could potentially lead to further upside in the prices. Currently soy meal FOB prices in Argentina are quoted at around USD 371 per ton, looking at the prevailing market scenario prices have potential to head towards USD 450-460 per ton. In contrary to the above scenario, if the actual production turns out to be higher than what market is anticipating then the prevailing market scenario could would see a turn around and prices could retest USD 300 per ton.
Considering all the above factors soy meal and bean prices would continue to draw cues from weather vagaries in Argentina which would in turn influence Indian markets as well. The roller coaster ride for the soy bean and meal prices will continue for the next quarter as well.

Highlights on Factors Ensuring the Quality of Organic Minerals In Dairying

Impact of heat stress on poultry