Mycotoxins are secondary metabolites produced by molds under stress conditions like fluctuation in temperature, changing weather patterns, high humidity, improper ventilation during storage, etc. These mycotoxins lead to USD 1.4 billion yearly (Nji et al., 2022) loss due to rejection/wastage of material, loss of performance & production, and prevention measures. Even though there are more than 400 mycotoxins, only a few are of major concern to poultry. They are aflatoxin, zearalenone, T-2 toxin, vomitoxin, ochratoxin A, ochratoxin B, and fumonisin. (Jelinek et al., 1989).
The diagnosis of mycotoxicosis is often difficult because of the variation in clinical signs, gross pathological conditions, and the presence of infectious diseases due to the suppression of the immune system. On the farm, more than one mold or toxin may be present in contaminated feed, which often makes the definitive diagnosis of mycotoxicosis difficult. Besides their adverse health effects and the decrease in production rate, concerns over their importance in public health are still under debate.
According to the Cargill Mycotoxin Survey for the period January 2022 – June 2022, India is in a high-risk zone for mycotoxin contamination of raw materials and finished feed because of favorable conditions for the growth of fungi. In India, a total of 3101 mycotoxin analyses were performed in the first half of 2022, and it was discovered that 99 percent of the samples were infected with mycotoxin and 75.23% of the samples were above the risk level. Aflatoxin is the main cause for concern because 76.19% of tests were above the risk level and 99.27% of samples were contaminated. Zearalenone, T2, and Fumonisin contamination rates for samples were 100%, 98.7%, and 88.31%, respectively.
Ingredient-wise mycotoxin prevalence pattern in India is as follows:
1. DDGS is at the highest risk of Mycotoxin contamination, in which all analyzed mycotoxins are present above risk level in major samples
2. Soya Bean Meal is a less contaminated ingredient, as all mycotoxins’ average level is not very high.
3. Extra precautions should be taken care while using corn, as aflatoxin levels are quite high.
4. Due to irregularity in processing & poor storage condition of DORB, it is highly contaminated with aflatoxin.
5. Ground Nut DOC is highly contaminated with aflatoxin & other mycotoxins are also on the higher side. 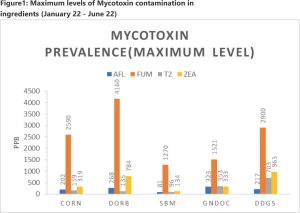 Mycotoxins can be divided into two groups according to their polarity. Mycotoxins like Polar (Charged) Positively charged being, AF & negatively charged being OA, Fumonisin and T2. Nonpolar mycotoxins involve ZEA and DON. Mycotoxins can range from 0.1 microns to 7 microns in size based on the concentration. (Aleksic et al., 2017). Apart from that Mycotoxin co-contamination is a constant challenge due to its synergetic & additive effects, as a single crop can be affected by various mycotoxins at different times, either in the field or in the warehouse. An integrated strategy can minimize mycotoxin-associated risks & costs, starting with the right and quick assessment of mycotoxin levels in various raw materials and finished feed, proper storage facility & adopting prevention measures accordingly. 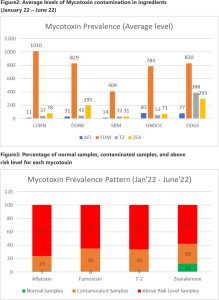 However, as the level of research grows and detection methods become more advanced, we are learning more and more about the lesser-known forms of mycotoxins, commonly referred to as ’emerging mycotoxins.’ While evidence of these toxins is rapidly coming to light, they are currently defined as “mycotoxins that are neither routinely determined, nor legislatively regulated.” However, just like their better-known counterparts, producers need to be vigilant, as these hidden thieves have just as much potential to cause problems for natural immunity, agri-food sustainability, and overall production profitability. Emerging mycotoxins are a new group of mycotoxins including fusaproliferin, beauvericin, enniatins, and moniliformin, all produced by the most common grain-contaminating fungi, Fusarium spp.
The integrated approach includes Technology-diverse decontamination methods based on physical, biological, and chemical strategies used to eliminate mycotoxins in feed, only a firm foundation presently can determine what exactly should be the best course of action.
Chemical Strategies
Chemical strategies involve the application of oxidants such as hydrogen peroxide, sulfur dioxide, sodium hypochlorite, ozone, or ammonia (Marshall et al 2020).
Biological Strategies
Bacteria and enzymes can be used to detoxify mycotoxins in the manufacturing of animal feed, according to European Food Standards Agency (EFSA) scientific opinion. However, before they can be employed in feed production, these biological approaches need to be subjected to legislative restrictions and study like the microbiological agent must be completely defined and accepted, the process must be efficient and irreversible, free of harmful microbial residues, must not produce toxic metabolites that pose a risk to the health of both animals and the public health and most importantly it should be feed processing stable and economically viable. (Piotrowska, 2021).
Physical strategies
Pre-harvest methods
a. Using a resistant variety of crop
b. Field management
c. Harvest management and
d. Fungicides, insecticides.
Post-harvest methods
a. Improved drying methods.
b. good storage conditions.
c. Grading & sorting.
d. Irradiation (Kabak et al., 2016)
Due to inadequate expertise, pressure on the supply chain, and a lack of readily available raw materials, very strict processes including physical decontamination are difficult to implement.
We need to grasp in practice the nature and characteristics of mycotoxins happening in combination and that developing a solution may be an all-encompassing process. With the understanding of most mycotoxins found in poultry feed and ingredients, as well as their characteristics, occurrence, and nature, we can approach the problem with a multipronged strategy. An ideal blend of aluminosilicates (phyllosilicates and tectosilicates) bentonites, and zeolites that have been naturally sourced from geographically advantageous locations around the world with the best adsorption properties. A blend with components derived out of organic sources for efficient and irreversible binding simultaneously protects intestinal integrity and causes immunomodulation.
The wider understanding reveals that during co-contamination of feed or feed ingredients, it is always practical to approach with ideal toxin binding strategy in vivo with a toxin binder with broad spectra of adsorption. The solution that ensures
a. Binding of all polar mycotoxins- Phyllosilicates with adequate Ion exchange capability, all tectosilicates, that is natural zeolites with the function of cation sites (Bronsted acid sites) (Li & Pidko, 2018)
b. Binding of all non-polar mycotoxins- with electrostatic forces (Vander walls forces) collectively by the organic adsorbents.
c. Adsorbents with adequate swelling, large & quality surface area.
d. Porosity-variable pore sizes, so that mycotoxins with various sizes can be efficiently bound
e. Irreversible binding
f. Protects alimentary tract with adverse effects of Trichothecenes
g. Components that support immune function during mycotoxin-induced immune suppression
Agricultural commodities are now originating from all corners of the globe & spreading the threat of mycotoxins through animal feeds produced worldwide. Minimizing the risk of mycotoxins from the field where crops are grown to animal feed and eventually food is a complex process that starts with prevention at the farm and requires a great deal of effort at every step in the food production chain (Jouany 2007). Consequently, it is assumed that it is not possible to eliminate more than 400 known mycotoxins from contaminated agricultural commodities. The only way to keep costs under control is to combine the preventive use of AMA with a decent mycotoxin control plan. This way, if the mycotoxin load in raw material increases, one has a chance to adapt the AMA inclusion rate accordingly.