Introduction
By 2050, there will be huge proatein demand in the global food system for the projected 10 billion people. Soybean meal (SBM) and fish meal (FM) remain the primary conventional protein sources for poultry feed. The cost of conventional proteins like SBM and FM is increasing continuously. Also, the production of soybean is connected with deforestation, soil erosion, eutrophication, extensive use of pesticides, loss of biodiversity, and a huge carbon dioxide (CO2) footprint. Recently, increasing soybean price has challenged the economic sustainability of the poultry meat industry, mainly in developing countries. Besides, many countries have either banned (e.g., meat and bone meal-MBM) or limited (e.g., fishmeal) the inclusion of valuable conventional protein sources of animal origin in livestock feed. Although soybean production has increased substantially over the past two decades to meet the rising demands, a gap between soybean production and consumption is seen around the world. Alternative protein sources are therefore the need of the hour to make poultry production a sustainable production system in the future. Therefore, to meet the future requirements of protein, new protein sources may be explored. Affordability, accessibility, and ease of processing for the poultry industry make these alternate protein sources more attractive for feed formulation. Hence, the availability of high-quality and low-price protein sources are important elements to maintaining poultry production competitively and continuing to provide animal protein for human consumption. This review aims to explain the scope of alternate protein sources which not only bridge the gap of protein need but also pave the way for sustainable poultry production that is used with modern feed additives and processed properly.
Protein Alternative Sources
Protein source for poultry feed comes from an animal, plant, and insect protein origin. In general, animal-based protein sources are high-quality proteins due to their high digestibility, biological value, and rich amino acid profile than plant-based protein sources. By using exogenous enzymes and proper processing, plant-based proteins can be converted into more digestible proteins with a good amino acid profile. Insect proteins are good in essential amino acid content and protein digestibility. Many studies have established the concept that insect proteins are well accepted by animals and 25–100% of soymeal or fishmeal can be easily replaced by insect protein.
Plant-based and insect-based proteins 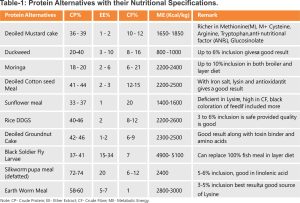 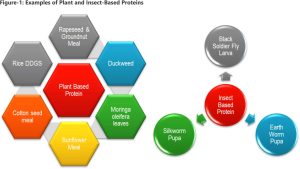 Conclusions
Understanding the alternative ingredient usage is crucial for maximum utilization and successful feed formulation. It is possible to improve the quality of these alternative protein sources through processing, genetic selection, and supplementation with nutrient and non-nutrient additives such as enzymes in order to improve their utilization by poultry. Multiproteases from Kemin contain three different proteases for better enzyme-substrate reaction and sustained activity throughout the gut, are equally effective on both animal and plant-based alternate proteins in increasing digestibility, improving the amino acid profile, and alleviating ANFs. For sustainable and competitive production of poultry meat, focusing on regionally available alternate protein sources is vital. Protein alternative sources should be used judiciously based on different phases of poultry growth, as feed consumption increases the requirement of amino acids and gradually comes down with age. In challenging disease outbreak periods, nutritionists may consider alternatives that have an immunity-enhancing role, rather than focusing only on growth and/or performance. A conservative approach is required when dealing with alternatives, but with a suitable laboratory analysis facility, next level of inclusion can be followed for better realization of cost savings.
Note: References available on request.