Importance and limitations of existing maize as grains
At global level, maize accounts for 15% of proteins and 20% of calories in world food diet. In India maize (Zea mays L.) is the third most important cereal after wheat and rice. Currently it is cultivated over 8.12 million ha with 19.77 million tonnes production with an average productivity of 2435 kg/ ha, contributing nearly 8 % in the national food basket. Maize occupies an important place as a source of human food (25%), animal feed (12 %), poultry feed (49%), industrial products mainly as starch (12%), and 1 % each in brewery and seed.
Unfortunately maize grain has two significant flaws; it lacks the full range of amino acids, namely lysine and tryptophan, needed to produce proteins, and moreover, the niacin (vitamin B3) present in the grain is bound as an indigestible complex. Earlier, the people used to boil maize in the alkaline limewater which would break down the complex so that the Niacin became available. However this practice did not transfer to the Old World or settlers in the “New World” which had earlier resulted in epidemics of Pellagra from the 16th century onwards. In addition, diets high in corn produce a condition known as wet-malnutrition – a person receiving sufficient calories, but her or his body malfunctions due to a lack of protein or protein energy imbalance. A chronic lack of protein in the diet leads to kwashiorkor.
In normal maize grain, the quality of protein is poor due to the presence of largest concentration of alcohol soluble protein fraction ‘prolamine’ also known as ‘Zein’ in the endosperm. Zein is very low in lysine and tryptophan content. Since this fraction contributes more than 50 per cent of the total protein, the protein of normal maize grain is low in lysine and tryptophan content. On the other hand, zein fractions contain very high amount of leucine and imbalanced proportion of isoleucine. On the whole, the lack of proper proportion of all these four essential amino acids results in the poor quality of protein in normal maize. The high quality of protein in other fractions in other parts of maize kernel becomes recessive due to the dominance of zein in normal maize. Thus, the poor quality of protein in normal maize affects its ‘Biological value’ i.e. the availability of protein in the body. Because, the lysine, tryptophan and threonine are the limiting amino acids in human beings and non-ruminants. In the absence of limiting amino acids the other amino acids are either deaminated and excreted (increasing the stress on animal) or used as energy source.
Development of Quality Protein maize
Surinder Vasal and Evangelina Villegas began their collaborative research at CIMMYT integrating cereal chemistry and plant breeding techniques. They produced a QPM germplasm with hard kernel characteristics and good taste similar to the traditional grain and with much higher quality levels of lysine and tryptophan. Quality protein maize looks and tastes like normal maize with same or higher yield potential. Besides increased biological value; QPM has additional nutritional advantages, such as higher concentration of niacin (vitamin B3) and improved absorption of potassium and carotene. In India, through acclimatization and repeated selection, hard endosperm modified opaque-2 maize inbred lines and their crosses have been identified for better protein quality and higher yield potential.
Nutritive Value of Quality Protein Maize (QPM):
The normal maize grain under Indian conditions on an average, contains 14.9 % moisture, 11.1 % protein, 3.6 % fat, 2.7 % fibre, 66.2 % other carbohydrates and 1.5% minerals.

The True Protein Digestibility of normal maize and Quality Protein Maize is almost same, but the biological value of normal maize is just half as compared to that of QPM varieties. Rather, the biological value of QPM is highest among all the food grains owing to the reason that all cereals except QPM are deficient in lysine, an essential amino acid and all pulses are deficient in methionine, the other essential amino acid.

There are no significant differences in gross energy (GE), apparent metabolizable energy (AME) (poultry) and apparent digestible energy (ADE) (pigs) between QPM and NM. Although NM has a higher GE content than QPM, its AME for poultry and ADE for pigs are lower than those of QPM. It indicates that the energy available from QPM is little higher than that from NM. 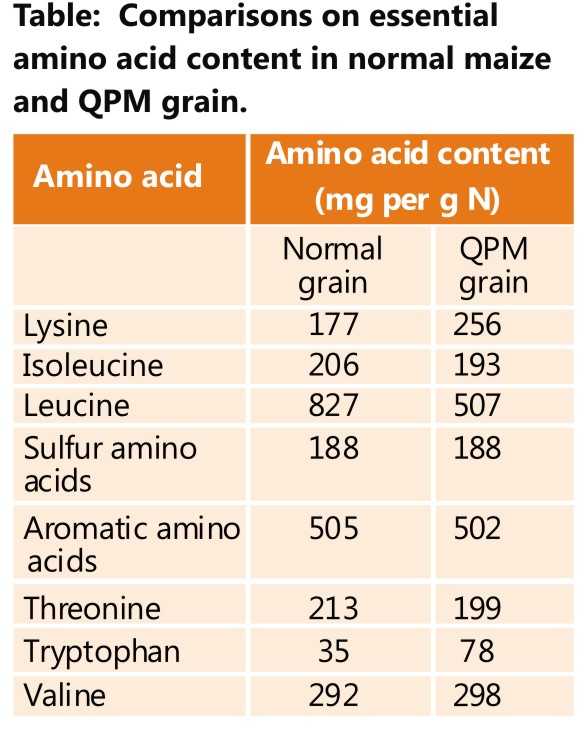