India is the sixth largest producerof feed in the world market, amounting for production of 34.2 million metric tons in 2017 with presence of around 1,201 feed mills. The industry is currently projected to grow at a CAGR of 7.0% to 8.0% in next five years as the consumer demand for animal-based protein continues to rise year on year. This is largely fulfilled by broiler (chicken), egg, fish, and dairy products.Consequently, poultry, aqua and dairy are the largest segment in India and accounts for the largest feed consumption in the country. Currently, poultry feed accounts for approximately, 58% to 60% of the total feed market in India and the consumption is projected to grow at around 8.0% in the next five years. Similarly, the aquafeed and dairy sector is projected to grow at a rate of 6.0% and 4.0%, on annual basis. The growth in these sectors is attributable to the growing per capita consumption of meat, eggs and dairy products.
However, according to ICAR- Directorate of Poultry Research, per capita consumption of egg and meat is way below the recommended intake, which reflects upon the potential opportunities for growth in per capita consumption. For instance, the present per capita availability of eggs is 54, whereas that of chicken meat consumption is 2.2 kg, however, according to the recommendations made by the Indian Council of Medical Research (ICMR) the per capita consumption of eggs should be 180 eggs and 10.8 kg poultry meat per annum. Tobridge this supply demand gap, the capacity of layer and broiler industry must be increased by at least 5 and 10 times, respectively. This in turn will result in increased demand for feed.
Maize, sorghum, soyabean meal and other vegetables oilcakes are some of the largely used raw materials in poultry feed. However, since they are experiencing rising demand from the food industry, majority of their production is being diverted for human consumption, resulting in their shortfall for the feed industry. Furthermore, their record high prices (especially for soybean meal), and continuing price & supply volatility is triggering the feed industry’s search for sustainableand lower cost alternative feed ingredients, thereby minimizing the cost of livestock production.
Other factors leading to the greater need for introduction of new raw materials in feed industry includes improving feed efficiency, and protein content in feed.
The current list of some of the novel ingredients in the feed industry includes Distiller’s dried grain with solubles (DDGS), and insect meal.Thesefeed ingredients are currently in the introductory stage of life cycle with varying market dynamics, widely varying regional and country specific regulatory laws, and production capacities.
Distiller’s dried grain with solubles (DDGS)
Distiller’s dried grains with solubles (DDGS) are the nutrient rich co-product of dry-milled ethanol production that are largely produced from corn and wheat that is supplied as livestock feed as an energy and protein supplement. It is considered as a ‘middle protein carrier’ with crude protein content between that of soybean meal and corn. Another factor that is currently driving the significance of DDGS in the feed industry is that it can be used to partially substitute raw materials such as soybean meal in feed, prices of which is currently experiencing high volatility across the globe. Thus, with the use of DDGS, cost savings can be done. 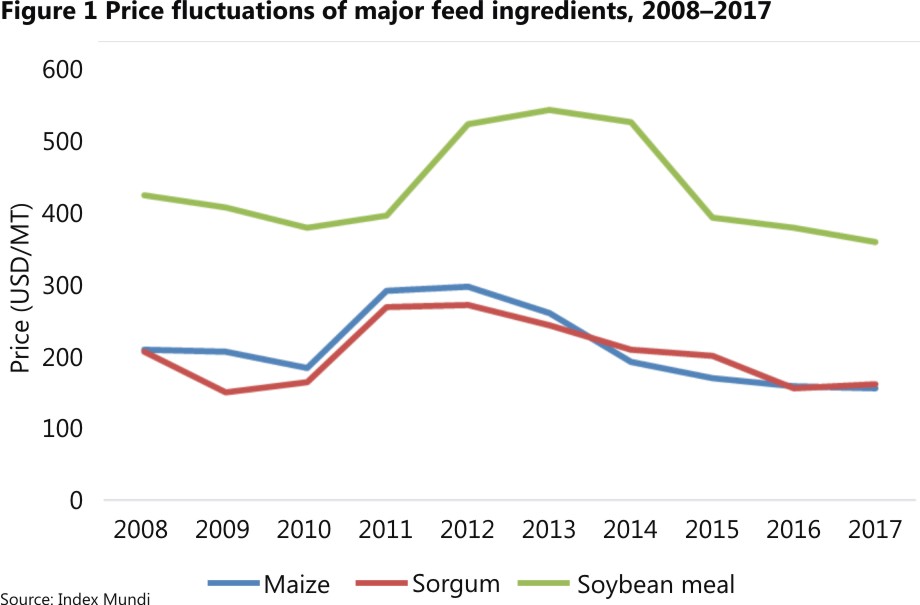 According to USDA’s Economic Research Service (ERS), “Findings demonstrate that, in aggregate (including major types of livestock/poultry), a metric ton of DDG can replace, on average, 1.22 metric tons of feed consisting of corn and soybean meal in the US.”The global volume production of DDGS was at 53 million tons in 2016. US accounted for the largest share of 83.0% in the global market followed by Canada. Largest importers of DDGS in global market includes China, Mexico, Republic of Korea, Turkey, Vietnam, Canada, and Thailand, accounting for 73.0% share. Over the period of last 10 years, the exports of DDGS has increased from 1 million tons in 2016 to 11.0 million tons in 2016/2017, any increase by more than 1000%.
In India, the production of DDGS very limited and is an upcoming feed ingredient. The demand for DDGS is also currently very low in India as it largely relies upon maize, soybean meal and canola. For its inching domestic demands, the country completely depends upon its domestic production to meet its industrial requirements.
Insect meal
Insect meal is another source of livestock feed that largely prospected for use as a source of protein.Largely produced from black soldier fly (around 72%), the global production of insect meal stands at around 19,600 metric tons in 2016. The growth of this market is attributable to the growing scientific research and industrial support for development and use of insect meal in feed, with focus on the objective of sustainability in the feed industry.
The global insect meal market has experienced significant boom in the span of last 15 years with establishments of more than 60 manufacturers.Europe is estimated to have the highest number of prominent players in insect meal manufacturing, followed by North America. In India, the market for insect meal is very niche and upcoming. Small scale players are entering this market segment, trying to tap into the growing market potential. Various parameters such as cost of insect farming, feasibility of production and distribution, geographies with booming demand, among other factors are being evaluated upon for further expansion. From a regulatory perspective, currently there are major restrictions on farming and usage of insect meal.
Other minorly used feed ingredients in the Indian feed industry includes molasses, de-oiled rice bran, oats, barley, and other coarse cereals.
Conclusions :
As Indian feed industry is posed for robust growth and as the industry is set to become more organized, the Indian feed industry has huge market potential to become of the largest feed markets, globally. The rising demand for animal by-products including meat, eggs, dairy and fish, among others, is estimated to cause shortfall in feed supply largely due to the availability in feed raw materials. Further, cost and sustainability factorsare likely to cause major concerns in the industry. Such factors are likely to offer significant growth opportunities for introduction of new raw materials in the Indian feed industry in the upcoming years.
by Nishikant Yadav, Markets & Markets