The role of methionine is very vibrant in the animal poultry market. Methionine is advantageous as a feed supplement across the spectrum of livestock production and particularly in the poultry segment. The industry is expected to develop along with the expansion of world economy and rising meat consumption.
As per the report of the Food and Agricultural Policy Research Institute(2010), the economic growth in developing economies of Asia are projected to grow at an average rate of 5.6%. This contrasts with the average growth in mature countries of 2.2%. Continued growth from countries such as China, India, and Rest of Asia makes the region an important part of the global economy. Asia’s share of the world’s GDP is expected to rise to 22% by 2018. China alone will become more than 10% of the global economy.
Big growth predicted
With a combined population of 1.7 billion or about one fourth of the world’s population, the major countries of South Asia–India, Pakistan, and Bangladesh as well as the smaller nations such as Nepal and Sri Lanka, all are growing at more than 7% of annual average growth rate.
Out of the growing animal feed markets, India is one of those economies which are experiencing a livestock revolution. It has long been one of the world’s most undernourished regions in terms of caloric intake and consumption of animal proteins. With its huge population and growing middle-class population, the demand for meat is on the rise, and hence the industry is demanding methionine for the production of feed.
Methionine is presently the largest revenue contributor to the Indian market, which can be ascribed to its higher price and growing use in feed grade amino acids for compound feed products. The demand for methionine is dependent upon the proportionate demand for protein in general and poultry in particular. The Indian industry for poultry is expected to grow more than 9% of the compound annual growth rate in the coming years.
Rising investments for local manufacturing
Currently, the usage of DL-Methionine is flourishing in Asian Economies, particular in India and is expected to grow fairly for the next 15 years. However, most Asian economies are dependent on imports of methionine to satisfy their demand for animal feed, owing to lack of production facilities. Lack of producers in developing nations can be attributed to the difficulty in adopting overseas technology and the nature of raw materials such as methyl mercaptan, acrolein, and hydrogen cyanide. 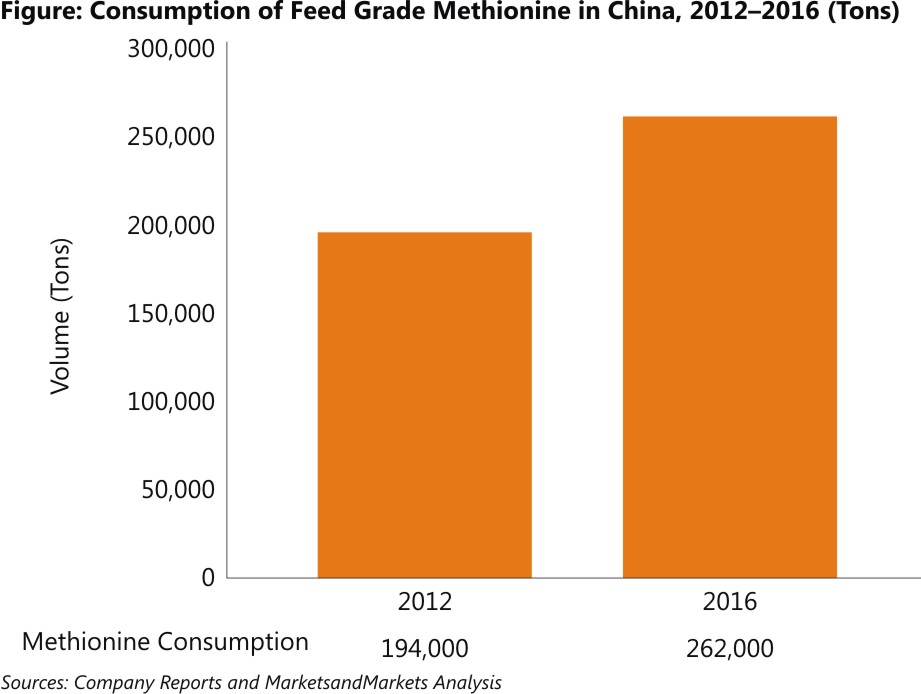 In 2012, China consumed 194,000 KT of methionine inclusive of theimported volume of 183,000, which was approximately 94.3% of the consumed amount. According to our analysis, the consumption of China is expected grow at a CAGR of 7.8% between 2012 and 2016 to reach at a volume of 262,000 tons in 2016.
Looking at the massive growth in the animal poultry feed sector in Asia, manufacturers are increasingly inclined to make investments in the production of amino acids for domestic markets. For instance, in 2014, Adisseo confirmed the start-up of its production plant of methionine in Nanjing, China. With this investment, the company aims at the growing meat demand in China.
Sumitomo Chemicals—a specialized Japanese chemical company, is expanding its methionine manufacturing facility by adding a new facility–Ehime Works in Niihama City, Ehime Prefecture, Japan which is expected to be completed in the middle of 2018. The company will increase its capacity by approximately 100,000 metric tons bringing the total production to 250,000 tons per year and is aimed at capturing the active demand within the Asian market.
Evonik—a Germany-based company is also highly investing in methionine production aimed at Asian Economies. In October 2016, the company announced the addition of the second methionine in Singapore. The company is set to invest more than USD 761 million in the plant, which will have a production capacity of 150,000 metric tons a year.
The demand for methionine could substantially go up if the product is readily available in the Asian market. This brings us to the conclusion that progress in technology, rapid population growth, and rising consumption of meat in the region are fueling Asia’s high demand for methionine.
What does the future hold for the Asian Methionine Industry?
One of the most promising and significant markets of the amino acids industry is methionine. There are various factors affecting the production methionine; right from the technology to the raw materials used. Thus, currently, manufacturers are continuing to expand their market and technology leadership in methionine with highly efficient, state-of-the-art production facilities in all major regions of the world including developing Asian economies such as China and South Asia.
Factors such as companies’ incorporating sustainable modern methods of livestock farming, population growth, and rising purchasing power are boosting the demand for animal protein, which is subsequently expected to bring forward the growth in the Asian methionine market. Interestingly, companies are not only expanding their production plants but also investing in technologies for the development of innovative products. The expansion investment by Evonik last year in Jurong Island (Singapore), which started in November 2014, is an integrated production plant which was planned for the production of MetAMINO (DL-Methionine) and all necessary precursors. Investments and growth strategies such as these are focusedon keeping pace with the growth of the market. Thus, a sustainable and constant growth is expected from the Asian methionine industry in the long run especially for newer and enhanced feed products.

by Nishikant Yadav, Markets and Markets