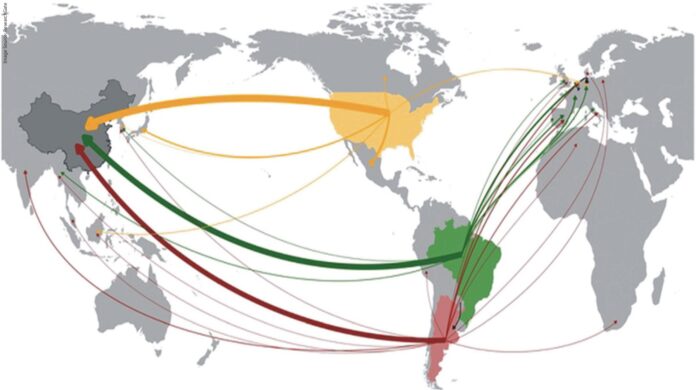 Soymeal markets have been trading with subdued note since starting of 2020. During January and March, global as well as domestic prices of the entire soy complex were plunging as the market could not assess the intensity of damage caused by the COVID-19 outbreak. After April the average price of most commodities, especially the soybean complex, recovered from its yearly lows which started from February till April of the year. Table 1 indicates the average price of soymeal from Indore.
Indian poultry feed industry which usually consumes ~35 percent of soymeal production of the country was badly impacted due to the pandemic which resulted in lower poultry consumption and misinformation further added to the worries of the industry.
Indian soymeal is considered to be one of the premium grade soy meals. European and Asian countries prefer to use it over other soymeal. India usually exports ~65 percent of the total soymeal produced in a year. It is mainly exported to South Korea, Thailand, Philippines, Japan, Bangladesh, Nepal and Middle-East countries. The global soymeal market was valued at USD 88.2 billion in the year 2018 and industry experts projected a growth of 4.2% CAGR, to reach a value of USD 112.6 billion in the year 2024.  This estimate might be revised considering the impact of COVID-19 on supply & demand of the commodity, future prospects still appear better for global soymeal trade.
Analysis 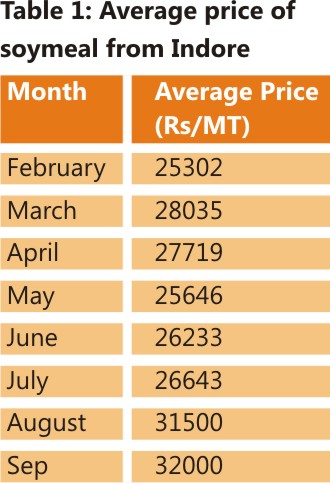 The recent forecast reports of the US Department of Agriculture (USDA) stated India’s soybean crush to improve by 1.1 million to 9.4 million tons in 2020-2021. Therefore, India’s soybean meal exports are expected to gather momentum.This year global soybean consumption is also expected to increase and China is projected to account for over half of global consumption growth and roughly 85 percent import growth. Considering strong competition from the United States and Brazil, Argentine soybean exports are projected to decline.
USDA also projected global soymeal consumption growth to 4 percent basis on growing demand from China. Global meal export is forecast to grow 1 percent in 2020-21. Argentina and India are projected to meet most of this growth while rising feed demand in the United States and Brazil might account for nearly all increase in their meal production.  India’s export estimate for 2020-21 is now projected higher at 2.07 MMT versus last year’s export of 1.45 MMT.

Like global markets, domestic poultry consumption is also stabilizing. The domestic feed consumption in India is expected to return to normal levels in 2020–21.With lockdown restrictions being eased, further improvement in poultry demand in the forthcoming year would depend on the HORECA sector. Considering all the above facts, prospects of global and domestic soymeal demand is most likely to improve in the coming year, and the consumption scenario also seems to remain better.
by Abhijeet Banerjee, Religare Broking