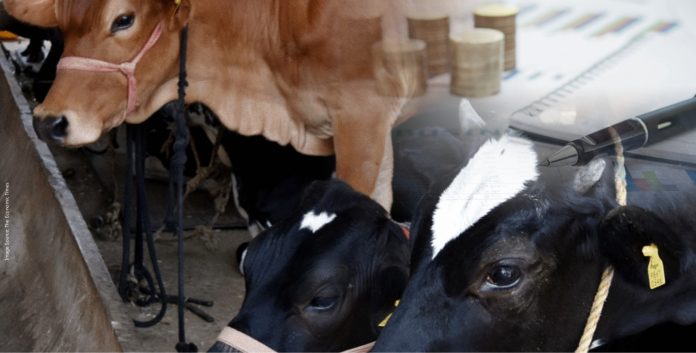 Introduction
Optimizing milk production and reproduction are imperative for sustainable dairy farming. This can be achieved through the adoption of scientific feeding practices. Interventions pertaining to ‘Feed and Fodder’ can play a pivotal role in making dairying more remunerative to the milk producers in both, the short term as well as the long-term situations.
These interventions need to be targeted towards the achievement of the following: maximizing milk output at every stage of lactation, optimizing feeding cost, achieving the desired ‘age at sexual maturity’, maintaining reproductive efficiency throughout the productive life of the animal and maintenance of health and immunity in the face of metabolic stress and challenges by pathogens.

1.0: Feeding strategies for maximizing milk output during the lactation period
In the production cycle of a dairy animal, a 100 day period of critical importance exists. This period begins 30 days prior to calving and continues up to 70 days post-calving. During this period, it is vital to ensure the birth of a healthy calf, maintain the health of the dam without any incidence of metabolic disorders during the transition period, achieve peak milk production in line with the genetic potential, prevent excessive loss of ‘Body Condition’ as well as achieve high fertility at first breeding.
1.1: Feeding of specially formulated ‘pregnancy feed’ to the dams
During the final weeks of gestation, the nutrient requirement of the dam increases and this is accompanied by a simultaneous decline in appetite as well as rumen capacity, leading to low feed intake. It is therefore important to supplement specifically formulated nutrient-rich feed to the animal, to fulfill its energy demand and prevent metabolic disorders such as ketosis and milk fever and at the same time minimize the incidence of retained foetal membranes, metritis and mastitis post-calving.
NDDB has formulated a specific ‘pregnancy feed’ to fulfill these requirements. This feed is being manufactured and supplied to the dairy farmers by the milk federations/unions in Punjab, Gujarat, and Karnataka with the active support and guidance of NDDB. In dams receiving pregnancy feed, the birth weight of the calf born was 24% higher and the calf mortality rate was 50% lower in comparison to the control group animals.
1.2: Feeding of specially formulated ‘early lactation feed’ up to 70-90 days post-calving
The amount of milk produced during the total lactation depends primarily on the milk yield during the early lactation as also the attainment of the peak yield commensurate to the animal’s genetic potential.
During this early lactation phase, the milk yield increases more rapidly than the feed intake and the animal starts mobilizing body reserves to meet the energy requirements. Mobilization of body reserves, though normal, should be gradual and not more than 0.5 kg/day. Higher loss of body weight may lead to metabolic disorders resulting in long-term impact on production and reproduction.
In addition to the supplementation of specifically formulated ‘early lactation feed’ to the animals the maintenance of the concentrate to roughage ratio at 50:50 and the adoption of ‘challenge feeding’ are other recommended practices during the early lactation phase.
2.0: Adoption of ‘Strategic Animal Nutrition Plan’ for optimizing the cost of feeding
The strategic use of green fodder – comprising the right mix of legume and cereal fodders – in combination with locally available concentrate materials/ cattle feed along with the usage of the right feed supplements can maximize productivity from animals while optimizing production costs. 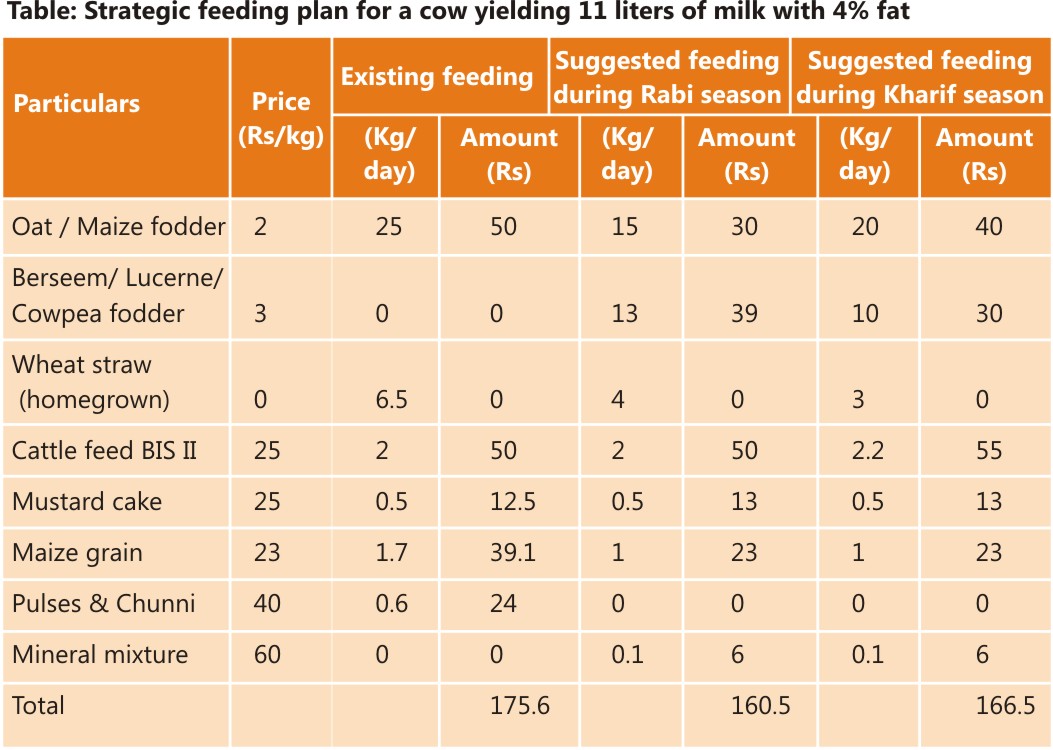 In line with this approach, NDDB has mooted the ‘Strategic Animal Nutrition Plan’ and the same has been adopted by some milk unions. Elements of this plan comprise the evaluation of nutrient requirements of animals in each physiological stage, assessment of the availability and price of key raw materials, planned green fodder cultivation, fodder conservation in the form of silage/hay and finally optimization of the dairy animals’ rations by using Least Cost Ration Formulation software (which incidentally is available free of cost in the e-Gopala App and can be downloaded from Google Play Store).
This plan is to be revised every quarter by the Animal Nutritionists at the level of the milk union and communicated to the dairy farmers in the form of a ‘ready reckoner’.
In those areas wherein the ‘Strategic Animal Nutrition Plan’ has been implemented, the cost of production was reduced by about 8% with a commensurate increase in milk yield by about 12%. The table below details an example of such a plan implemented in the state of Bihar.
Conservation of green fodder in the form of silage
The non-availability of green fodder, particularly during summer, increases the cost of feeding and also hampers animal productivity. It is therefore important to conserve green fodder during seasons of surplus to ensure regular supply during lean periods.
NDDB has been rendering continual support to dairy farmers and milk unions in all aspects of silage making. Various models of silage making – small scale, medium scale, and large scale with capacities of 5 Metric Tons per day (MTPD), 16 MTPD and 100 MTPD respectively – have been designed for the benefit of farmer entrepreneurs, milk unions, etc.
Strategic use of feed supplements to address physiological and climate-related challenges faced by milch animals
i. Feed supplement for improving Fat and SNF content in milk
Fat and SNF content in milk directly impacts the price realization by the dairy farmers. Fat and SNF content of milk depends on many factors such as species of the animal, breed, lactation stage, season, milking practices, and nutrition. Nutritional factors affecting fat / SNF content in milk are: imbalanced feeding, feeding energy-deficient rations, low Body Condition Score (BCS), improper rumen function, excessive concentrate feeding, improper roughage to concentrate ratio, deficiencies of minerals, etc.
Several feeding strategies can be adopted for improving the fat and SNF content in milk. These include (but are not limited to) the maintenance of an appropriate roughage-concentrate ratio, supplementation of appropriate additives as well as the avoidance of Negative Energy Balance.
NDDB has designed a specific feed supplement for the improvement of fat/SNF in milk. Studies have shown an average 7.2-9.6% increase in fat and a 1.8-2.4% increase in SNF when this supplement was fed to cows. Similarly, an average 2.4-3.7% increase in fat and 1.6-1.8% increase in SNF in buffaloes was observed.
ii. Feed supplement for mitigating ‘heat stress’ in cattle and buffaloes
‘Heat Stress’ is a common occurrence in most parts of India. Dairy cattle start experiencing heat stress at a Temperature Humidity Index (THI) of 72 and above. Beginning in the month of April and extending up to September moderate (72 THI) to severe heat stress (85 THI) has been reported in most states in India.
Heat stress can lead to substantial economic losses for farmers owing to reduced milk production – by up to 20% – in the immediate term and sub-optimal fertility in the medium term.
‘Heat stress’ can be mitigated by nutritional and management strategies. Supplementation of appropriate nutrients/additives can reduce the negative effect of heat stress on animals and stabilize the income of dairy farmers during the summer months.
NDDB has developed a specific feed supplement for mitigating ‘Heat Stress’ which has been widely appreciated. Many milk unions have taken up the production of this supplement with NDDB’s support and are supplying the same to their pourer members during the summer months.
3.0: Feeding management of calves to address the issue of high ‘Age at First Heat’ and ‘Age at First Calving’
One of the important aspects of profitable dairying is the regular ‘replacement’ of low productive/ unproductive animals with high producing animals. It is recommended that dairy farmers raise their own replacement animals rather than procure from outside to enable accurate assessment of milk yielding potential and mitigate the disease burden.
A properly managed program for the rearing of calves on the farm can reduce mortality rates in new born calves, reduce the ‘age at sexual maturity and ensure the desired ‘Age at First Calving (AFC)’.
NDDB’s scientifically designed ‘Calf Rearing Programme’ (CRP) has been operational in three states of India for more than four years and covers both indigenous cow breeds, cross-bred cows, and buffaloes.
Calves reared under this program have recorded higher birth weights and higher daily growth rates than animals in the control group. The ‘age at first calving’ in such calves were 31 months in Kankrej cows, 29 months in Murrah buffaloes and 24 months in Crossbreds.
4.0: Real-time monitoring of critical parameters in animal nutrition for profitable dairying
Real-time monitoring of parameters such as feed intake, fat and protein content in milk, feed residue in a manger, BCS, and dung score enable the dairy farmer to evaluate the rations being fed and take up corrective actions expeditiously to maintain the desired levels of milk production and milk quality.
Farmers could start recording the feed intakes and BCS of animals and juxtapose the same with data pertaining to milk / fat yields, ration composition, etc using simple spreadsheets. Analysis of this data could throw light on the causal factors for many a problem facing the farmers and enable appropriate remedial action.
The 21st-century dairy farmer is faced with both challenges and opportunities. There is ample scope to improve the profitability of dairying if the methods and techniques listed above are adopted by the dairy farmers.

Outlook of the Indian Poultry Industry Opinion of Industry Stalwarts