This makes the cow highly efficient in withdrawing energy from a well balanced complete diet. Therefore, there is a rationale in optimizing the dry matter intake rather than maximizing the dry matter intake of dairy cows. It helps the nutritionist and dairy farmers to manage the cost of feeding caused by price fluctuation around the year, and results in fetching higher income over the feed cost. 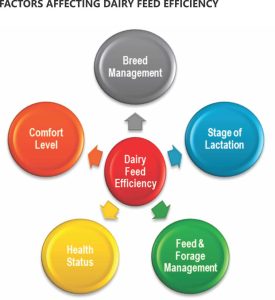 Various factors must be considered before calculating the feed efficiency at a dairy farm.

This method of calculating feed efficiency focuses on the ability of a dairy animal to produce milk efficiently. Feed efficiency can also be calculated by determining kg of milk produced per mega calories of feed consumed by dairy animals.

The following table indicates the feed efficiency in different stages of lactation. 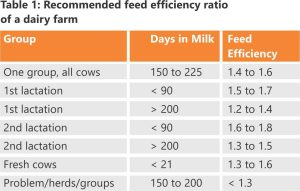 a. Active Dry Yeast:
Yeast has been used in dairy cattle nutrition for a long time. Various forms of yeast are commercially available, which include yeast cell walls, yeast lysates, yeast metabolites, yeast cultures, and active dry or live yeast. Among them, the inclusion of rumen-specific active dry yeast in the dairy cattle ration has shown a significant improvement in overall rumen health and feed efficiency when compared to other forms of yeast. Rumen-specific active dry yeast act as a probiotic and helps in scavenging available oxygen inside the rumen subsequently making the rumen environment more anaerobic and favorable to microflora growth.

b. Enzymes:
Forages account for 40 to 100% of the ration of dairy cows. Fiber plays a vital role in animal productivity and health. A one-unit increase in forage-neutral detergent fiber digestibility (NDFD) is associated with 0.17 and 0.25 kg/d increases in DMI and milk production, respectively.

The addition of exogenous enzymes in ration not only improves fiber digestion but also improves dry matter digestibility. Enzymes tend to increase feed efficiency by acting on the most limiting nutrient of the diet, i.e., by unlocking the energy of the undigested portion of the ration.

Thus, it improves the energy nutrition of the ration and the dairy efficiency of the farm becomes profitable. A combination of Xylanase potentiating factor (XPF) and non-starch polysaccharides (NSP) enzymes is able to harness the full energy from NSP of cattle feed, which results in feed optimization and increased milk production and milk fat%, which has proven by minimum RoI of 3:1.

Methionine and lysine are the first and second limiting amino acids in the ruminant diet, respectively. When rumen-protected Met & Lys are incorporated in ration through amino acid balancing, it tends to improve milk yield and milk composition, thus filling the gap of amino acid deficiency in the diet, and thereby, improving feed efficiency and nitrogen utilization efficiency. Amino acid balancing helps in lowering crude protein of ration around 2% and helps to obtain similar results to earlier crude protein (CP) levels.

d. Toxin-binder:
Diverse climatic conditions and volatile raw material prices lead to increased incidences of mycotoxins in cattle feed. Mycotoxins such as aflatoxins, zearalenone, ochratoxins, fumonisins, etc. are not only harmful to the animal but are equally harmful to humans.

According to Kemin’s internal survey, more than 80% of cattle feed was found contaminated with more than the permissible limit (20 ppb) of Aflatoxin B1 which leads to the lowered health status of the dairy animals and ultimately poor feed efficiency. Toxin binders are recommended to be added to the ration of dairy cattle to avoid the harmful impact of mycotoxins and have been found to be effective in the ruminal environment to bind with toxins and remove them outside the animal body through dung. In this process, toxin binders also improvise palatability and feed intake, thus increasing overall feed efficiency.

CONCLUSION
Continuous fluctuations in raw material prices and increasing operational expenses lead to reduced feed efficiency and overall animal performance. We are having a great opportunity in terms of improving feed efficiency that will help to optimize the economics of commercial dairy farming. Good management practices and the usage of specialty feed additives in the ration are the most important tools to improve feed efficiency.

Spotlight on the use of GM Crops in India: A subject stuck in a continuous debate among various stakeholders