Last year, the Alltech Global Feed Survey estimated world animal feed production at over 1 billion metric tons globally for the first time. This year, our estimates have confirmed that barrier has been crossed again, with a total of 1.07 billion tons of feed produced in 2017. Now in its seventh year of analysis, the Alltech Global Feed Survey continues to be the most quoted reference on the state of the feed industry.
The survey data not only give insights into the feed industry, but into the health of agriculture as a whole, and, to some degree, it reflects the strength of the individual economies of the countries included in the report.
The information becomes more robust and detailed every year, with new countries included this year, namely Cambodia, Laos, Fiji and Samoa, for a total of 144 countries.

Where is the growth?
The growth seen in 2017 was strong at 2.57% over 2016. Indeed, over the last five years, the feed industry has seen a total growth of 13%, which translates to an average growth of 2.49% per annum. This substantial and healthy growth has been supported by higher consumption of meat, milk and eggs, which is reflected in the increased feed production for the pig and broiler industries as well as the dairy industry.
The feed mill number has increased from last year about 5%. It was determined that some of the smaller, private feed mills, particularly in European countries should be included because they have grown to a larger size and are contributing more significantly to animal feed production.
Which region is growing fastest?
Europe and Asia-Pacific tied for the title of fastest-growing region, each at a 3% increase over 2016. This growth primarily stemmed from increases in pig and broiler feed production in Europe and pig and pet feed production in the Asia-Pacific region. Russia, in particular, increased its estimated pig feed, including more private production than before. While Russian broiler feed production also increased by 3%, Ukraine, Romania, the U.K. and Belgium also reported higher numbers, resulting in strong growth for that sector in the European zone.
Growth in the demand for broiler feed of 3% and less than 1% for layers has been seen and a historic improvement of 1% in feed conversion efficiency, primarily led by genetic improvements.
Africa 10%
Europe 7%
Global leaders in pork production led the way in pig feed production in 2017.
China rebound in pig feed production
Russia grew as government policy favors internal production and import displacement
Africa – Many smaller countries also showed marked increased in pig feed production
Dairy was one of the few sectors that saw growth across all regions.
Europe 2%
Africa 10% 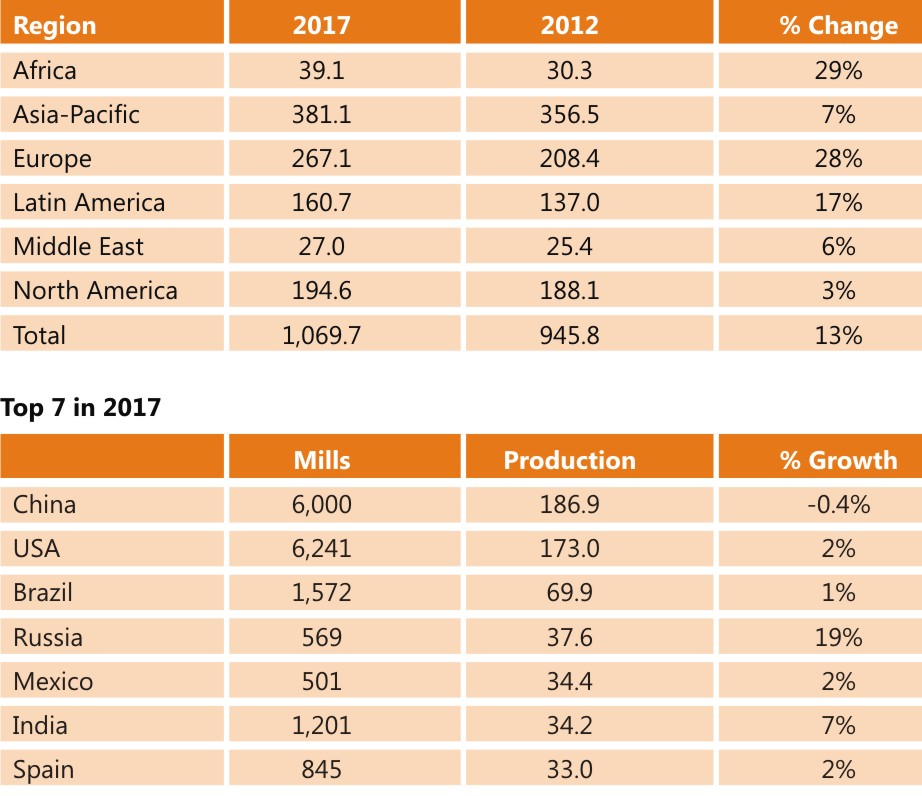 Both pet food and horse feed have had strong years, with no regional declines in either species.
Europe 17% (Russia, the Czech Republic, Romania, Poland and Hungary combined for over 580,000 metric tons of extra pet food)
Latin America 15% (Uruguay, Ecuador, El Salvador, Chile and Argentina represent combining for 725,000 more tons)
Asia Pacific-13% (China, Thailand and Taiwan as the primary contributors)
The top seven countries can be viewed as a barometer of the trends in agriculture. This year, comparing the production of these top countries as a percentage of aggregate feed production from the rest of the world demonstrates how significant they are to the overall business:
Aquaculture
Aquaculture trends tend to be amongst the most anticipated because of the strong growth of farmed fish over the past 10 years and the degree to which aquaculture is replacing wild fishing as the primary source of fish for human consumption. Aquaculture feeds remained stable overall in 2017. The numbers showed a slight decline in the Asia-Pacific and European regions, while Latin America and the Middle East increased aqua feed production. African countries mainly increased aquaculture feed production, but one of the larger producers, Egypt, saw a decline. 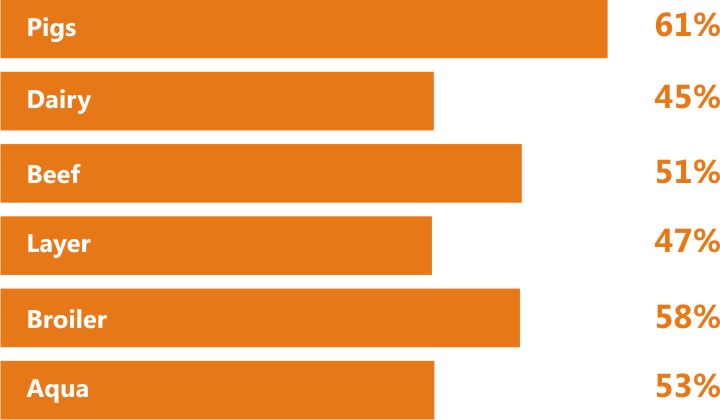 Asia-Pacific is 70% of aqua feed production.
The continued weakness of aquaculture in China (-5%) reported this year and last, and to a lesser degree in the rest of Asia-Pacific, has been linked to changes in consumption, disease outbreaks and a consolidation of the industry. Additionally, government controls on feeding practices and food safety, particularly the administration of antibiotics, may be having an influence on production levels. Brazil, Chile and Peru led the increased reported production in Latin America, and Iran stood out from the pack in accounting for almost all of the reported growth in the Middle East. Carp leads the production of aquaculture feed, with shrimp/prawn and tilapia as the second and third places in total production. Catfish, salmon and trout also ranked, though to lesser degrees. 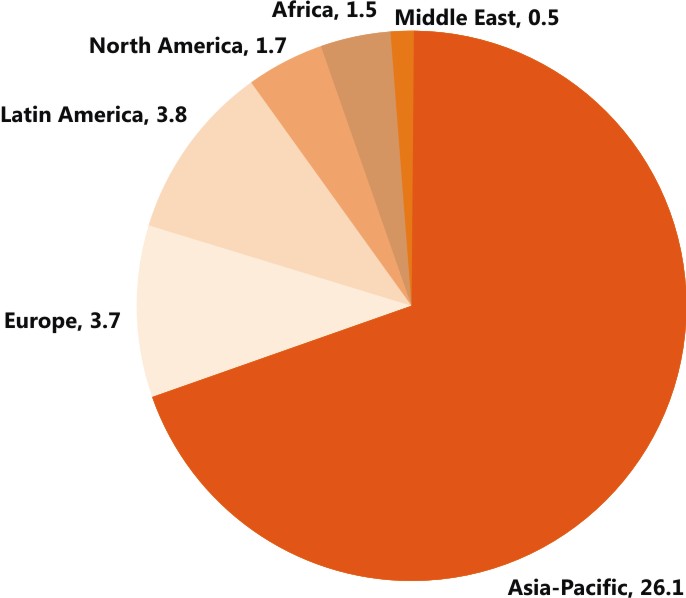 Feed costs reflect the global economy
Feed costs did not change much in 2017, which would be seen as a positive by many in the industry. Certainly, it has been good for producers of milk, meat and eggs as feed costs are highly correlated with cereal and vegetable protein prices.
In choosing to evaluate the feed costs for finisher feeds of pigs, layers and broilers, Alltech elected to compare these feeds based on the relative homogeneity of these formulations globally. Pig finisher feeds cost, on average, about 2% more globally than 2016. Considering that the production of pig feeds was about 5.54% higher, this would indicate a strong year for this sector.
The layer industry grew just 1%, but it remained stable with a drop of just 1.7% in feed costs. Broiler production costs for finisher diets dropped 14% globally, while the industry itself is showing incremental growth of just under 3%. Yet, with feed representing 70% of live animal production costs, this cheaper feed will translate into cheaper chicken and eggs for the consumer. 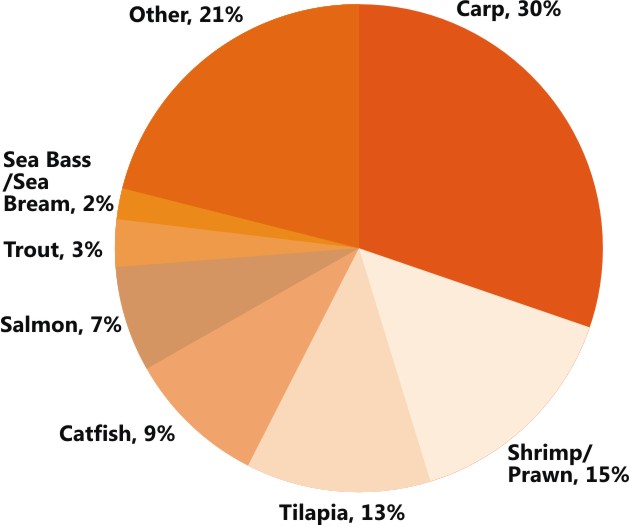 While the average global feed costs did not change much from 2016 to 2017, some individual countries experienced greater volatility. Germany and Bulgaria saw increases across the board for finisher diets. On the other hand, some Latin American countries seemed to get a break regarding feed costs. Brazil, Peru, Chile, Paraguay, Jamaica and Costa Rica all reported declines in animal feed finisher diet costs. Many countries in Africa, such as Nigeria and Cameroon, maintain some of the highest finisher diets with costs nearing $700 or above.
Aidan Connolly views on different countries
China
The Chinese feed production was down a little bit. And, in particular, some of the species did see a reduction. Specifically, aquaculture continues to drop. However, a rebound was observed in terms of the feed production for pigs, and that was quite significant. Of course, China is in the process of consolidating its pig farming, a number of the smaller farms being closed over the last two to three years. That has led to a reduction in the number of breeding animals, sows. And overall, there was a reduction in pork production the previous years of about 7 percent. However, this year, feed production went back up. And overall, that had the effect that China in general was about flat.
Russia
Russia is a really interesting story. Of course, Mr. Putin, the president, wants to make Russia a strong country, bring it back to some of its glory days and, in particular, is focused on food production. Self-sufficiency of food production is a critical part of that. Russia has been importing a lot of food from the United States, was importing from Europe, and was also importing from Brazil, but it’s been exerting its soft power in its ability to restrict the importation, in particular, of chicken and, more recently, of pork and is looking for its own farms to replace that, so they become, if not necessarily self-sufficient, less dependent on imports.
The significance for the feed industry is that feed production numbers grew quite significantly this year, by about 14 percent. That is being seen specifically in terms of pig farms, dairy farms and, to a lesser degree, chicken farms.
India
India’s species are much more restricted because, from a religious and cultural perspective, they don’t consume beef. They are relatively limited in their consumption of pork, and even a certain percentage of the population doesn’t want to consume chicken. So, eggs have continued to grow. Broiler meat is growing and did grow this year very strongly as well. But milk, in particular, continues to grow. So, those three species are very strong.
India has become a significant exporter of shrimp. We have seen a growth in aqua feeds as well from India. There are some concerns over the use of antibiotics. India is relatively light in terms of its consumption of protein per capita. And if that grows, that will lead to growth in eggs, of chicken meat and, to a lesser degree, of milk.
Africa
African economic growth continues to be strong. It’s coming from quite a low level, though the economic growth is also spread across many countries. So, on a yearly basis, we are seeing that the African continent is growing by, in excess of global averages, probably somewhere between 5 and 7 percent in terms of GDP, and that is widespread.
In particular, we saw a very strong year in Nigeria. Of course, Nigeria is expected to be the world’s third-largest population by 2050, exceeding the United States, exceeding Indonesia, exceeding other countries in the world, just following China and India. So, it’s not surprising that we will continue to see an increase in protein consumption there. However, the cost of protein continues to be very expensive in Africa. Nigeria in particular, but also many of other countries, did report extremely high feed prices which mean high prices for eggs, meat and milk.
Source: Alltech