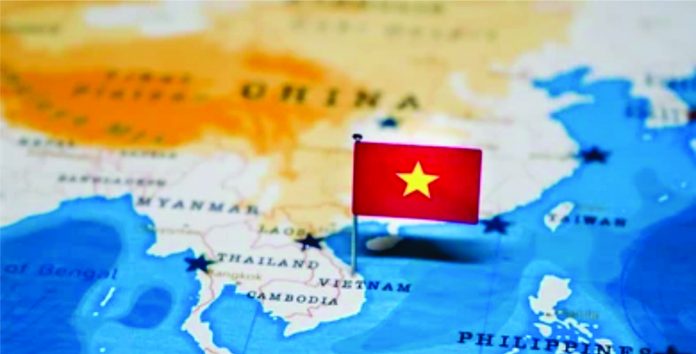 Vietnam is an emerging economy in Southeast Asia that has experienced rapid growth and development during the last few decades.
Vietnam has turned to imports of corn as a feed ingredient to support the level of meat production, which increased nearly 30 percent in the last decade. Vietnam is by far the largest importer of corn in Southeast Asia and USDA forecasts it to be the fifth-largest importer globally in 2021/22.
Though pork has principally been the meat of choice for the Vietnamese people, consumption of chicken meat and beef has grown as well. Aquaculture—the production of fish, shellfish, or other species in an aquatic environment—is also an expanding industry and represents a continuing opportunity for exporters of feed ingredients, according to USDA’s International Agricultural Trade Report.
Increased production, increased imports 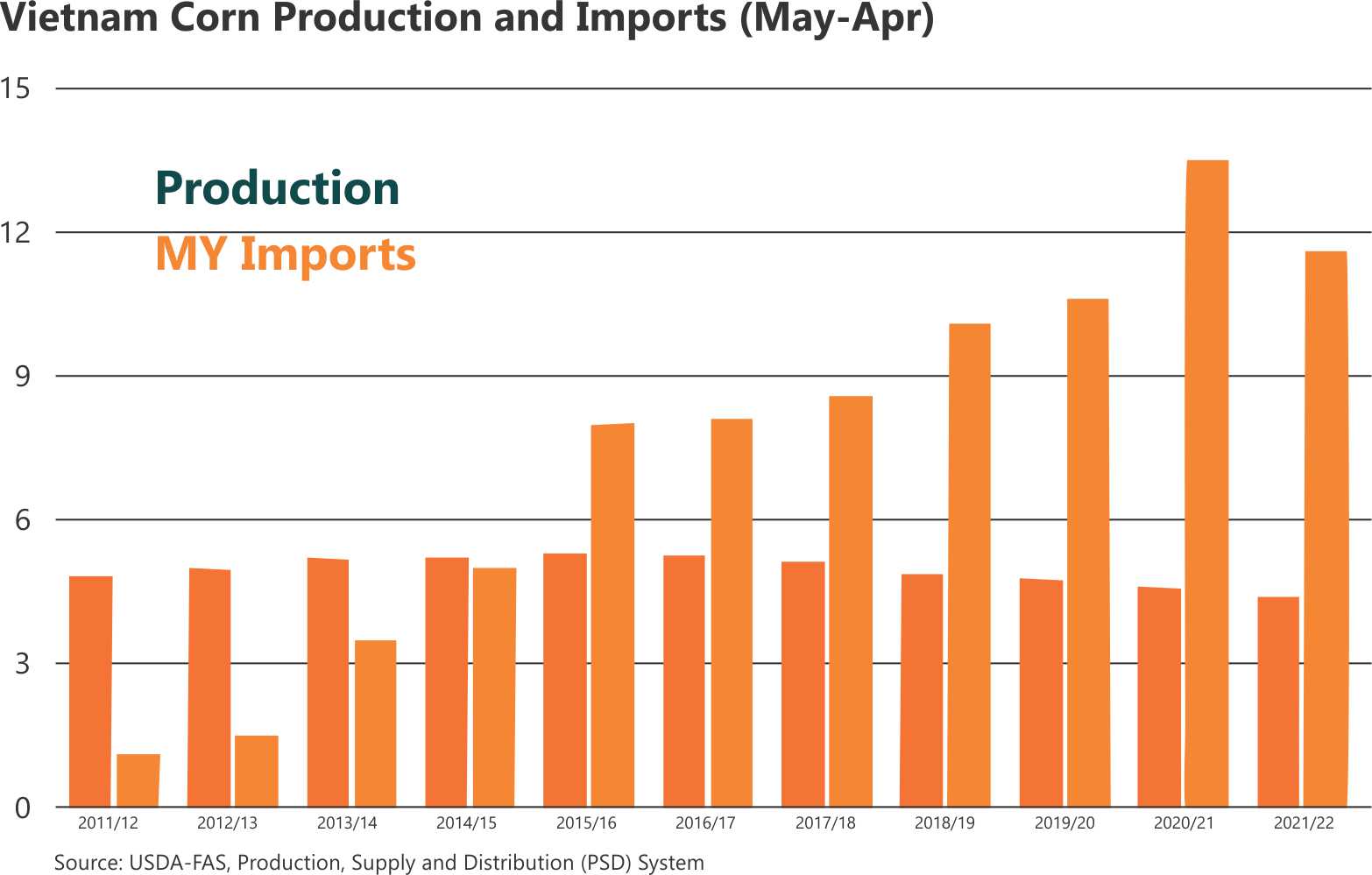 Vietnam corn production began increasing in the 1980s and continued this general trend through 2015. However, it reached an inflection point in 2015/16 as imports exceeded production for the first time since the 1970s. Corn production stalled and started to decline as domestic producers were increasingly less able to compete with imported corn on both cost and quality, which discouraged them from expanding corn area. Supplies in Argentina and Brazil became more abundant and generally traded at a lower price than U.S. corn. These two countries have supplied the majority of Vietnam corn imports from 2013/14 to the present.
Despite the 2019 incidence of African swine fever (ASF) in Vietnam, importers appeared relatively undeterred as corn imports continued unabated. The decline in the current year forecast for Vietnam corn imports represents the first year-to-year decline since 2011/12 and is attributable primarily to lower exportable supplies from a frost-damaged safrinha in Brazil. 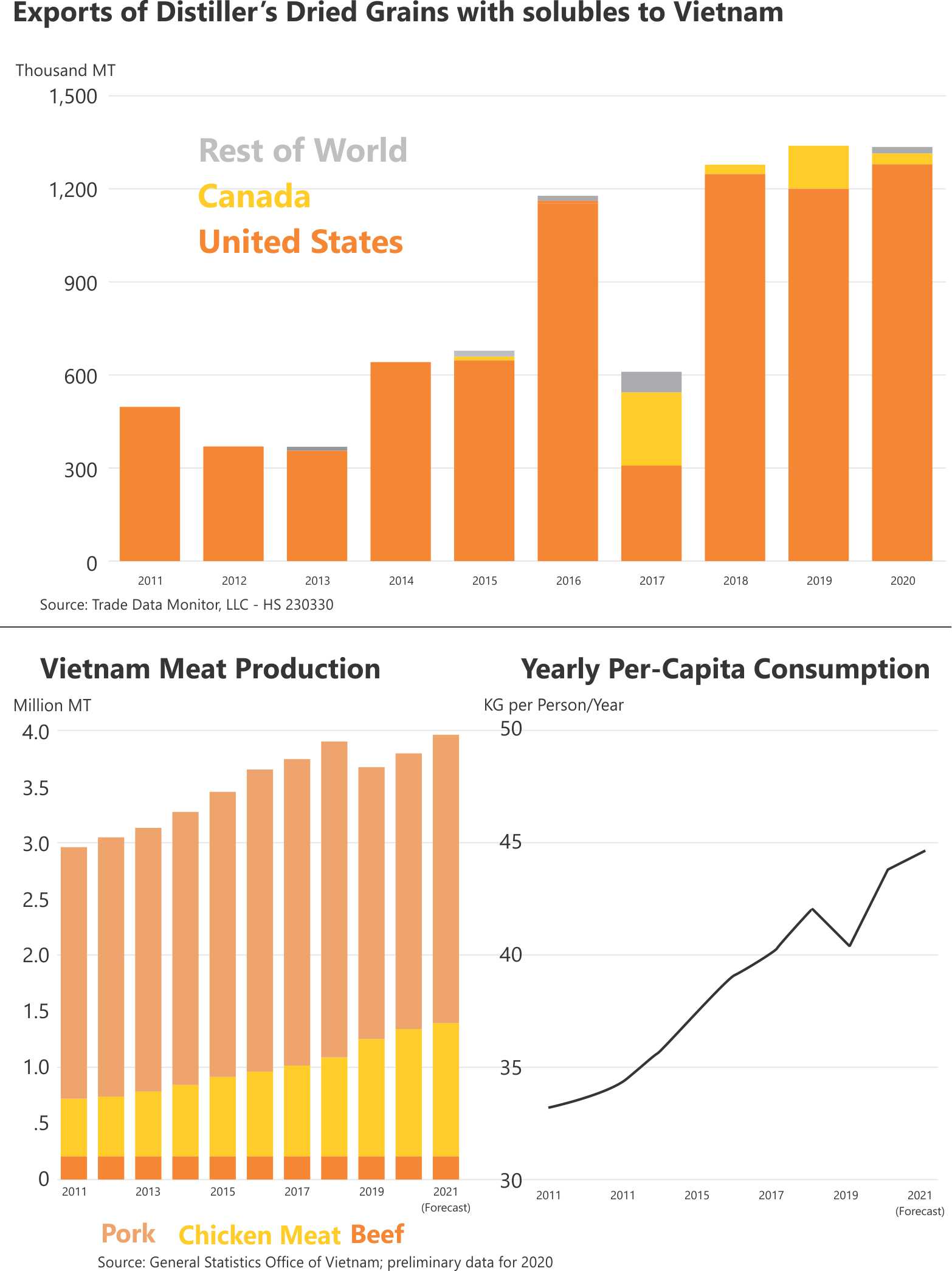 Vietnam imported the largest volume of U.S. corn in the 2018/19 marketing year, when corn production in Argentina and Brazil was negatively affected by drought. However, imports of U.S. corn have been limited in other years. In late August 2021, in conjunction with a visit by Vice President Kamala Harris, Vietnam announced a tariff reduction on corn, which could improve U.S. competitiveness.
Though the United States is at best a residual supplier of corn to Vietnam, U.S. exports of distiller’s dried grains with solubles (DDGS) have grown during the past decade. Vietnam is now one of the top importers of this commodity from the United States, using DDGS as a high protein and energy content feed ingredient.
In almost every year of the last decade, the United States captured nearly the full volume of global DDGS exports to Vietnam. U.S. exports of DDGS to Vietnam in 2020 totaled nearly 1.3 million tons, valued at more than $275 million. DDGS inclusion in feed rations is tolerated well in many animal species, including those raised in Vietnam
As a result of the abundant imports, Vietnam’s corn feed and residual use has continued to push higher, tripling in the span of 10 years. Corn makes up the majority of grain feed and residual use, vastly eclipsing wheat and barley. Reflecting this higher level of feed use, a similar trend can be seen in meat production. Though overall meat production dipped in 2019 due to the ASF impact on pork production, chicken meat and beef production have both grown during the period. Total production across the three meats is expected to exceed 2018’s level in the current year. Increasing per capita meat consumption, supported by higher imports since the incidence of ASF, indicates that the demand for animal protein continues to rise.
On top of the recovery of pork production and expansion of beef and poultry meat production, Vietnam’s growing aquaculture industry offers further opportunities for exporters of corn and DDGS as feed ingredients.