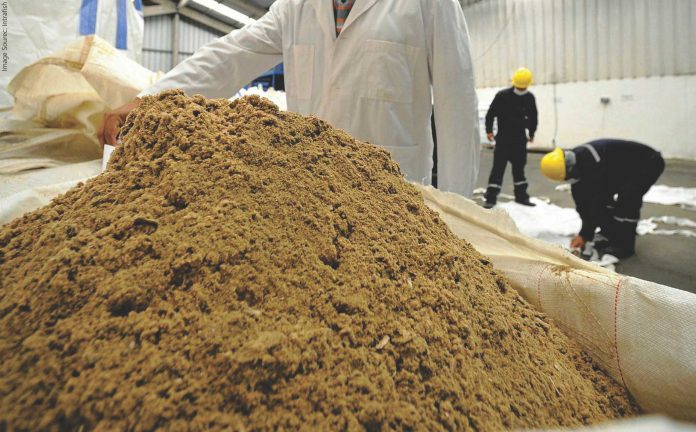 The growth of shrimp farming worldwide is a leading factor in the growth of the fishmeal market, according to new data released by IFFO, the international trade body that represents the marine ingredients industry.
During its recently concluded online annual meeting, IFFO experts said fishmeal demand continues to be driven by the shrimp-farming sector, particularly in Asia and South America. Ecuador’s export-focused shrimp sector, which hit a historic low in production in 2000, grew by 564 percent between 2006 and 2020, a trend that is predicted to continue. The pet food industry in Asia, and China’s pork industry, are also the biggest factors in future growth of the fishmeal market. China’s pig-farming sector is recovering from outbreaks of swine fever, although the price of pigs is currently subdued in China, which may flatten growth.
Asian companies consumed more than 70 percent of global fishmeal production in 2020, largely due to the aquaculture industry, which accounted for 86 percent of usage. The highest growth rates were seen in the pig feed sector in China and in global petfood production, although pigs accounted for just under 9 percent of the total market for fishmeal, and pet food just a few percent.
Peru was the main exporter of fishmeal in 2020, accounting for 27 percent of the market, while Chile was second with a 9 percent share. China was the single-largest importer at 1.4 million metric tons (MT), a 41 percent share of the market. This situation is not expected to change in 2022, according to IFFO Market Research Director Enrico Bachis.
Bachis said within the aquaculture sector, crustaceans account for 28 percent of fishmeal usage, other freshwater animals including shrimp consume 23 percent, marine fish take 21 percent, and salmonids use 14 percent. Usage for tilapia farming is less than 5 percent.
As of August, year-to-date production of fishmeal in 2021 was up by 6.5 percent, and fish oil up by 12 percent compared with same period in 2020. Peru, Chile, and India were the main drivers in production of both commodities, IFFO reported.
IFFO’s panel discussions also covered the future of blue foods, the effects of climate change, market trends, nutrition, fish health and growth, new ingredients, and sustainability, including the issue of illegal, unregulated, and unreported (IUU) fishing.
FAO Fisheries and Aquaculture Manuel Barange tackled climate change in his keynote speech, looking at its impacts on fisheries and aquaculture.
“Climate change is fundamentally a disrupter,” he said. “Aquaculture is vulnerable and will be impacted. But it is possible to adapt to, even though it may be costly.”
Barange said ocean warming has driven a 4.1 percent decline in maximum sustainable yield over the past 80 years and that maximum catch potential is projected to decrease by up to 12 percent by 2050, with large geographical differences. He warned climate change will disrupt the entire seafood value-chain, from institutions and management systems, through fishing operations, processing, markets, and consumption. Mitigation and adaptation will be crucial to resolving the effects of climate change, he said.
IFFO Director-General Petter Johannessen said he was bullish on the potential for so-called “blue foods,” or foods derived from marine environments. Johannessen cited research conducted through the Blue Foods Assessment, a joint international initiative commissioned by the High-Level Panel for a Sustainable Ocean Economy, which recently completed two years of research into the role of blue foods in creating healthy, sustainable, equitable food systems. The Blue Foods Assessment research found better management and technological innovation can enable a sixfold increase in the supply of food from the ocean compared to current levels. Johannessen said the industry needed to do a better job of integrating itself into the blue foods movement and incorporating blue foods messaging.
“We strongly believe that blue foods hold solutions to climate change impact-mitigation,” he said. “Demand for fish is expected to double by 2050. As fish is a finite resource, we all know that an increased demand is dependent upon aquaculture’s growth. It is just impressive to think that with one kilogram of marine raw materials, five kilograms of farmed fish are produced.”
IFFO President Anne Mette Baek said the industry could also do a better job keeping byproducts out of the waste-stream. Byproducts already make up one third of fishmeal and fish oil, Baek said, but the industry can do better.
“Much more will come with the growth of the aquaculture sector, which itself produces byproducts, thus relieving pressure on the terrestrial environment,” she said.
The use of marine raw materials, including newer options such as mesopelagics and cellular fish, require an integrated approach through the lens of sustainability, according to Árni M. Mathiesen, chair of the newly launched Global Roundtable on Marine Ingredients. The roundtable aims to tackle such issues in detail, in order to gain a consensus about the future of marine ingredients.
Mathiesen called for whole life-cycle assessment of all products used in the creation of marine ingredients, a project that should be addressed through a collective lens, he said.
“We are facing a potential protein crisis and the role of fish is only going to increase,” Mathiesen said.
Source: seafoodsource