India is one of the largest producers and consumers of vegetable oils. The country ranks fourth in the world for oilseed production, which suggests the importance of oilseeds in Indian agriculture and its economy. Indian vegetable oil economy is fourth largest in world which is next to the USA, China and Brazil (GOI, 2016). The major oilseeds crops cultivated in the country are Groundnut, Rapeseed and Mustard, Castor seed, Sesame, Linseed, Safflower, Sunflower and Soybean. However, Groundnut, Rapeseed/Mustard, Soybean and Sunflower cultivation account for a major chunk of the total crop output. Climatic condition of India is suitable for the cultivation of oilseed crops; therefore, large variety of oilseeds crops is being cultivated here. Presently more than 27 million hectares of land is under oilseeds cultivation, the area under oilseeds has been increasing and the production has also increased in many folds but land productivity is still low as compared to other producing countries in the world. The scenario for average area under production, world best yield, expected crop production and edible oil output is given in table 1.

The low and fluctuating productivity is primarily because of marginal lands, lack of irrigation facility and low inputs. In order to improve the situation of oilseeds in the country government of India is pursuing several development programs like Oilseed Growers Cooperative Project, National Oilseed and Development Project, Technology Mission Oilseeds (TMO) and Integrated Scheme of Oilseeds, Pulses and Maize etc. The concerted efforts of these development programs/schemes register significant improvement in annual growth of yield and area under oilseed crops.
However, India still needs to import a significant proportion of its edible oil basket to fulfil its requirement. The Technology Mission on Oilseeds adopted a four-pronged strategy in order to harness the best of production, processing and storage technologies for attaining self-reliance in vegetable oils. The mission initiated corporatization and modernization process in the oilseed sector. There are 1500 oil meal industries, 600 solvent extraction units, 600 vegetable oil refineries and 250 vanspati units spread across the country for crushing/processing oil seeds/oil cakes, rice bran and vegetable oils. Table 2 provides with achieved and expected production of oil seeds.
The total area under oilseed crops was 19.0 million hectares during 1985-86 which increased to 25.2 million hectares during 1992-93 and area under irrigation also increased from 17.3 per cent in 1985-86 to 24.1 per cent in 1992-93. The total production showed remarkable jump from 10.83 million ton to 20.11 million ton during this period and imports fell drastically from 1.1 million ton to 0.1 million ton in 1992-93. 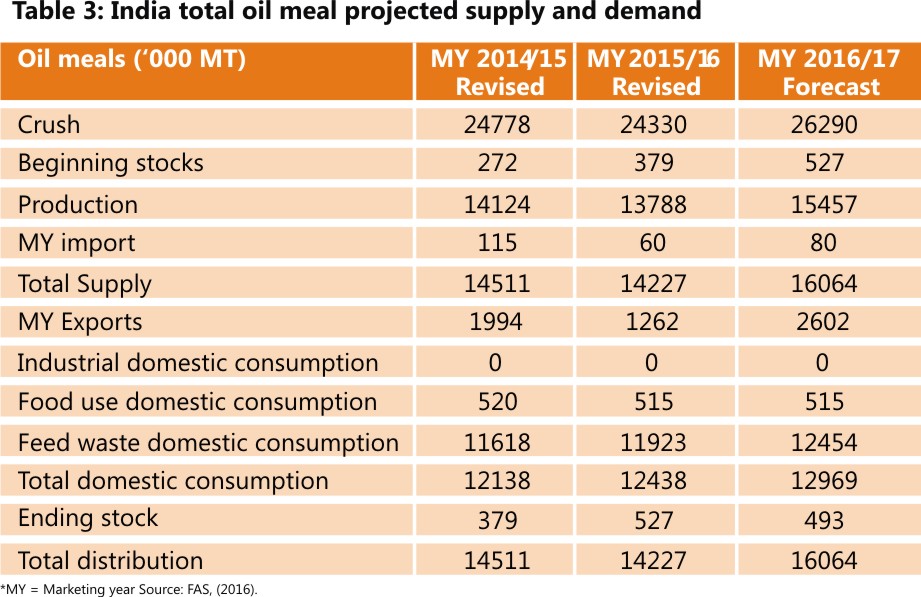 The period from mid 90s to early 2000s observed decrease in the area and output of oilseed crops. The area under oilseeds registered only 2.7 per cent growth and production registered – 1.8 per cent growth (Narayan et al., 2011). It reveals that the area under oilseeds is shifted to other crops and farmers are losing interest in growing oilseed crops. The low output prices, high risk, attack of insects and pests, weather threats etc are some of reasons for decrease in area and output. Higher Government minimum support prices (MSP) for wheat and rice, which are important competing crops for oilseeds in some regions, also shrunk the area under oil seed cultivation and slowed down the growth rate of the crop during this period. 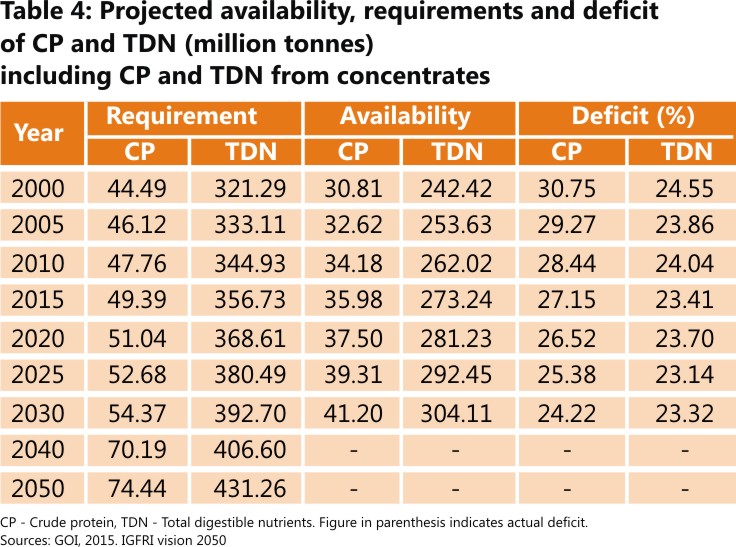 During the period of 2000-2009, the total nine oilseed crops showed a growth of 2.5 per cent, 5.2 per cent and 2.6 per cent in area, production and productivity respectively. The total oilseeds area, production and productivity was 22.7 million hectares, 18.4 million ton and 810 kg/ha respectively during 2000-01, which increased to 27.6 million hectares, 27.7 mi8llion ton and 1006 kg/ha during 2008-09 (Narayan et al., 2011). It is heartening to note that the significant growth in production is coming from the yield effect as the area for cultivation is limited. The advance estimates reveals that the Kharif oilseed production will meet the set targets of the coming year. The oil meal production of the country is forecasted in table 3.

Depending upon the production of oilseed crop and the animal population the requirement, availability and deficit of crude protein (CP) and total digestible nutrients (TDN) is given in table 4. Below given information includes CP and TDN from concentrate as well as green and dry forage. Requirement figures up to 2015 are projected estimating the growth rate of animal population in India.
In order to fulfil the demand of concentrate and compound feed tones of oil cakes, oil meals and its residue is being imported to India. The amount of cakes and meals imported in million tons (MT) and its value in lacks is given in table 5. This indicates that despite the large agricultural land is for the oilseed production, the oil seed crop produce is neither sufficient to fulfil the demand of edible oil for growing human consumption nor as concentrate cake/ meal to be used as a feed ingredient in compound feed. In such a situation it is difficult to be self sustainable as the situation is alarming and could be a cause for future feed crises.
by Sharad M. Durge, Vilas B. Dongre & Suchita P. Uke, College of Veterinary and Animal Sciences, Udgir