Home Articles Spotlight on the use of GM Crops in India: A subject... 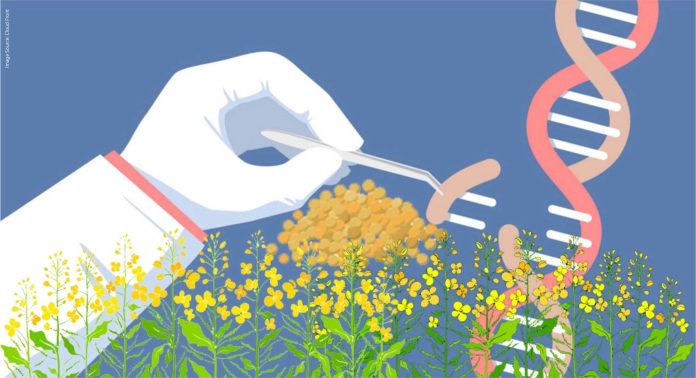 There appear to be conflicting views in India, with regard to the use of Genetically Modified (GM) crops as food or feed. For the last three or four decades, plant geneticists have been trying to change the character of some food/feed crops, primarily with the view of introducing a desired gene in these crops, through genetic engineering/modification.

The modified gene is introduced in the particular plant species so that it is able to withstand the attack of some insects/pests, which normally destroys some part of the plant and thereby, results in a drastic reduction in the crop yield.

The groups which have been advocating genetically modified food/feed crops are the ones, rather the biotechnologists, who have actually put in years of research on evolving such crops through genetic modification, so that yield of the crops increases substantially.

Apart from that, there are those, who deal with different aspects of raising and using such crops, viz. large farmers, importers, exporters, and food and feed processors.

One conspicuous example of the successful use of genetically modified (GM) crops in India is the introduction of the Bt Cotton gene in the Cotton cropin 2002. This initiative rejuvenated cotton cultivation in India, as it greatly helps in preventing the damage of crops by field pests, especially fruit borers, and leaf eaters.

It has made India, a world leader in cotton production. Incidentally, a trial was conducted at NDRI, Karnal on feeding Bt cottonseed cake to dairy cows for a period of 6 months. The results did not show any adverse effect either on the health of animals or the milk quality.

As per the report published recently in “the Tribune” (Chahal and Tuli, Dec. 2022), Brinjal was the next GM crop developed by a team of scientists at Delhi University. The Bt Brinjal was developed through public–privatepartnership, using the gene from a soil bacterium (Bacillus thuringiensis), which is resistant to fruit and shoot borers.

It received a nod from GEAC (Genetic Engineering Appraisal Committee)but met with forceful resistance from environmentalists, which led to its moratorium on the recommendation of the Ministry of environment. he objection was raised since the safety aspects with regard to human consumption had not been done for the crop.

Meanwhile, another edible GM crop hybrid mustard DMH -11, has reached an advanced stage of approval for commercial cultivation. The GEAC has recommended its environmental release for seed production but the question is, shall this also meet the same fate as Bt. Brinjal.

It is claimed that DMH-11 can yield 20 % higher crop than the conventional varieties. If that is so, then it can also help in reducing the import of edible oil, and provide more mustard oil cake as a protein source for animal feeding in the country.

One major point raised by some experts (Chahal and Tuli, Tribune, Dec. 2022) is the insufficient long-term (chronic) toxicity studies on Bt Brinjal. The second argument against Bt Brinjal was the fear of contamination of diverse brinjal varieties in India with the transgenes.

In fact, none of the above two issues have been examined in the case of GM Mustard either. GM mustard has an herbicide-tolerant gene. It will produceherbicide glufosinate ammonium to kill weeds. There are warnings about the adverse impact of the consumption of such GM mustard.

Worldwide, around 30 countries grow GM crops on about 185 million hectares. The largest exporter of products of GM crops happens to be the US. It is exporting GM soybean to many countries in South East Asia and Africa as animal feed.

However, with regard to genetically modified foods/feeds,it is a good thing that India so far has resisted the temptation. The US is not happy with India in refusing to import genetically modified foods/feeds from that country. In fact, it has filed a fresh complaint against India at World Trade Organization (WTO) only recently. In its submission, the US has sought the withdrawal of India’s import restrictions on GM goods/feeds.

The food and agricultural expert Devender Sharma, (Tribune, Dec. 2022) argues that GM mustard, which was accorded environmental clearance by the GEAC recently, without the ICAR knowing what is the actual yield potential of genetically engineered DMH-11 variety.

So, without this proper knowledge about yields, which is perhaps not as per the tall claims madeearlier, how can this low-yielding variety reduce India’s dependence on edible oil imports? Chahal and Tuli, (Tribune 2022) further warn that it is mandatory to rigorously test GM crops for human safety and the environmental impact of the cultivation of GM crops before these are cleared for use as feed and food crops.