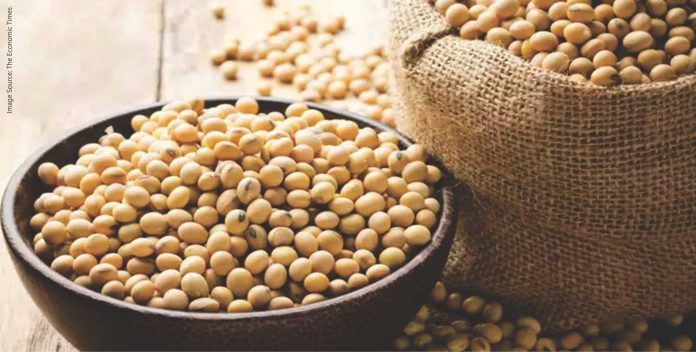 Madhya Pradesh might lose its “soya state” tag as poor-quality seeds have hit cultivation and yield. The state government is also advising farmers to switch to alternate cash-rich crops like pulses and corn among others.
Ahead of kharif season, the farmers in the state face an acute crisis of quality soya seeds which are available at a price of Rs 10,000-12,000 per quintal. And despite this high price, there is no guarantee of germination, farmers said. Sources associated with soya processing sector in the country termed it a “conspiracy”.
Madhya Pradesh and Maharashtra constitute almost 89% of the country’s soyabean production. In MP, Malwa region produces almost 50% of the oilseed. Last, year the crop was sown in about 58.54 lakh hectares in MP while in Maharashtra, it was sown in about 43 lakh hectares area. But now, the Madhya Pradesh government has issued directives to its officials to discourage the farmers from sowing soya crops.
Talking TOI, agriculture minister Kamal Patel said, “I have held a meeting with the top bureaucrats of my department including the additional chief secretary and agriculture production commissioner and issued directives to advise farmers to go for alternate crops rather than soya.” The minister also said, “Soyabean cultivation has been taking place for the past 35 years that has resulted in a decline in the quality of the seeds. They are prone to seedling disease. There has been a decline in yield. Last year it was only 6.23 quintal per hectare production.” Patel said, “the seeds are not available because of crop failure last year. And if the farmer procures seed at a cost of Rs 10,000 a quintal, what would be the cost of production. It is going to be a loss-making venture.”
The state government’s U-turn has surprised the soya processing industry in MP including Soyabean Processors’ Association of India.
Source: Indiatimes