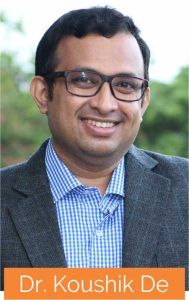 Poultry production has increased at a faster rate than any other livestock animal globally. Among other- rapid improvements, a nutritionally balanced-feeding program along with antibiotic growth promoters (AGPs) in poultry diets played a significant role in achieving this success. A healthy gastrointestinal tract (GIT) is crucial for optimum performance, better feed efficiency, and the overall health of poultry. AGPs are commonly used to modulate the gut health of animals. However, considering public health concerns regarding the increase in antimicrobial-resistant bacteria, the use of AGP in agriculture animals is banned or regulated in several parts of the world. This necessitates the need for alternative nutritional strategies to produce healthy poultry. Several alternatives to AGP have been attempted with some success. Routinely, the AGP alternatives and other nutrients are provided to birds via feed or water. However, the GIT of newly hatched birds is functionally immature despite going through significant morphological, cellular, and molecular changes toward the end of incubation. Thus, early growth and development of the GIT are of critical importance to enhance nutrient utilization and optimize the growth of poultry. Thus, young animal nutrition (YAN) plays a critical role in developing immunity, promoting efficient weight gain, and reducing mortality for young animals. Once they’re off to a good start, these animals deliver higher performance throughout their entire lives.
Importance of Young Animal Nutrition
The chicks emerge from an embryonic condition wherein the energy basis of their nutrition is yolk’s fat and egg white’s proteins. During the first hours of life, there is a significant reduction in the endogenous glycogen levels, which need to be replaced preferably by glycogen from the consumption of corn starch or another source of starch. Chicks need to learn quickly to consume feed, allowing their digestive system to undergo rapid anatomical and physiological transformation. Furthermore, early feed consumption also promotes the rapid development of the immune system. The chicks must also quickly learn to consume water to compensate for any dehydration that could occur from the hatch until their arrival at the farm, thus also favoring the consumption and digestibility of feed. Research has shown that young animals, particularly chicks, have an underdeveloped gut system making them more prone to physiological and nutritional changes. The transition of a chick’s nutrient utilization from embryonic reserves to solid feed forces rapid adjustment of the newly developed digestive system. Several investigators have reported that chicken weight at six to seven weeks had a linear relationship with their weight in the first week, and it was not due to the breeder’s age or day-old chicken weight.
Broiler feeding in the first few days of life is one of the priorities that could affect growth, feed efficiency, uniformity, and finally the profit of farmers. The pre-starter feed can be more expensive than starter feed, but such feeding lasts for a shorter period and has a more favorable effect on the performance of birds. Nutrient utilization in chicks at an early stage is dependent on digestion and absorption of nutrients in the GIT. Improved performance has been observed in broilers fed pre-starter containing carbohydrates and fat during the first hours of a chick’s life. Some pre-starter diets are prepared with more focus on digestible nutrients than the total requirements, and it can precondition the chick to later digest complex substrates once they acquire matured enzyme production in the GIT. Since highly digestible alternative substrates tend to be expensive, the use of enzymes, possibly at a higher rate than that applied in later phases of the diet, could improve the productive performance of birds. As an example, young animals require a high protein diet to be able to build muscles, connective tissue, and organs. At the same time, they do not have enough endogenous enzymes such as trypsin and chymotrypsin to digest protein in the diet. Yet we feed our young animals a diet that can have a potentially high content of trypsin inhibitors, such as soybean meal (SBM).
In a trial from Chen et al., it was noted that trypsin, the enzyme that helps to digest protein, is still at a minimum level until day 14 and only starts to reach the peak level at day 21 (Table 1).

Chen et al. analyzed the content of TI and urease activity (UA) in more than 1,000 samples of SBM from all over the world and observed a high degree of variability in the reported Anti Nutritional Factors (ANF)values, both within the same country and among different origins. This is an important piece of information since young animals still have low levels of trypsin enzymes, and a high incidence of TI in their diet will adversely affect their performance, particularly their gut health. When gut health is impaired at the young animal stage, there has been seen a negative impact on their ability to absorb and digest nutrients, which is much needed to reach the target body weight and feed conversion ratio (FCR).
Use of Exogenous Protease
Research has shown that the use of protease enzyme improves overall animal performance, particularly when applied in the early development stage without a substantial increase in feed cost. This is the result of the beneficial effects of a low-protein diet, which minimizes the metabolic strain of excreting surplus nitrogen, along with the added benefit of leaving more dietary energy available for growth, particularly in the early stage. Improving young animal gut health also provides an overall improvement in animal performance as well as a return on investment to attain higher profitability. Based on a Novus trial, adding protease in young broilers can improve body weight by 8% and reduce FCR by 2.4%.
Immunity at Early Stage
After hatch, the chicks use the maternal immunity immunoglobulin that is present in the amniotic fluid and yolk of the egg until their immune system fully develops a few weeks later. In birds, the GIT is an important immune organ that represents approximately 70% of the immune system. Therefore, early feeding is not only associated with digestive organ development but also with the functioning of the immune system in chick hatchlings. In addition to protein and energy, it is also critical for early feeding to include nutrients such as minerals and vitamins, as well as other feed additives like prebiotic, probiotic, organic acids, and essential oils.
Use of Eubiotics in the Young Animal Nutrition Programme
When it comes to poultry gut health, coccidiosis and necrotic enteritis are major economic challenges, particularly when present in a subclinical form where outward symptoms may not be observable. Due to epithelial damage and inflammation, these sub-clinical infections reduce feed efficiency and result in an opportunity for potential pathogens. Poultry trials in broilers challenged with Eimeria and Clostridium perfringens(Table 2) showed that a novel feed additive (essential oil) – an encapsulated, highly concentrated blend of thymol with carvacrol – promotes healthy intestinal microbial flora, as well as supports gut barrier function, inflammation processes, and immunity. The product is shown to have a positive effect on reducing coccidialfaecal oocyst shedding and minimizes damage to the intestinal epithelium in infected birds. The use of this essential oil for reducing coccidial oocysts in excreta could lead to the development of a new strategy for the prevention of avian coccidiosis.
Many studies on which the efficacy of organic acids and aromatic compounds in improving feed efficiency and animal growth have been conducted(Khan and Iqbal, 2016; Huyghebaertet al., 2011). The inherent limitation of free compounds (i.e.,those already absorbed and/or metabolized at stomach level or, in the best case, at the beginning of the duodenum) indicates that applying these compounds in broiler diets in a free form will not ensure a sufficient, effective dose to modulate microflora reaching the entire intestinal tract. This can be overcome by embedding the active compounds in a special matrix that degrades through normal enzyme activity as it passes along the intestinal tract, gradually releasing the active ingredients for an optimal impact (Munin and Edwards-Lévy, 2011). Establishing a well-balanced intestinal microflora is a key point to optimizing performance in young animal nutrition. Supplementing the diet with eubioticssuch as essential oils and protected organic acids can potentially support a healthier microbiota, being efficacious for reducing the E. coli and C.perfringens colonization of the gut. 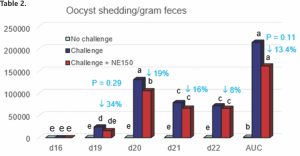 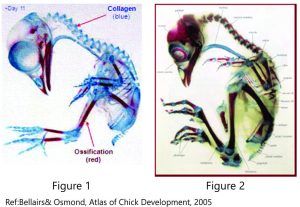 Young animal performance can start even before hatch. Improvements in chicks’ structural integrity have been seen in breeding hens fed highly bioavailable bis-chelated trace minerals.Tissue staining on day 11 (Figure 1) highlights the fact the structural tissues at this stage are formed from collagen (blue stain) whereas by day 19 (Figure 2) ossification has occurred and calcium deposited on the collagen matrix (red stain). The enzymes catalyzing these processes are dependent upon zinc, copper, and manganese for their biological activity. Using highly bioavailable bis-chelated trace minerals in the breeder diets can improve the structure of the collagen, making a better foundation for the calcium crystal and healthy bone that will be deposited on top.
Future Potential and Limitation of the Young Animal Nutrition Programme
The next step in early nutrition could be to imprint the genes of a bird at a very early age and turn it into a more efficient animal later. In addition, the administration of digestible nutrients into the amnion of embryos can bring an improvement in bird quality, increased glycogen reserves, fast development of the total digestive tract superior skeletal health, better muscle growth rate, and higher body weight gain, improved feed conversion, and enhanced immune function.
The main limitations to optimal performance are still associated with embryo development and nutrient metabolism. Another future solution could include a probiotic preparation that fits the specific needs of the individual bird. In that instance, the future of early nutrition would mean feeding complex symbiotics and replacing feed additives and supplements in the post-hatch feed.
Conclusion
Early nutrition programming is one of the latest and most successful methods to help newly hatched chicks become chickens with a healthy gut, favorable microbiota, improved immunity, and overall improved growth performance. Early feeding of chicks with exogenous enzymes, eubiotics, amino acids, and highly bioavailable bis-chelated minerals has been found to improve total digestive tract development, increase growth rate, and feed efficiency, and reduce post-hatch mortality and morbidity. Further, these feed additives are shown to promote the growth of beneficial gut microbiota, improve the immune system and the response to enteric antigens, reduce the incidence of developmental skeletal disorders and improve rapid muscle development and breast meat yield. Further work continues to better understand the embryonic development and nutrient metabolism process more precisely, particularly how early nutrition affects specific genes responsible for the performance, intestinal health, and overall health-related traits in poultry.
References are available on request.
by Dr. Koushik De, Novus International