Animal feed plays a major role in the global food industry. It is one of the major constituents for ensuring safe and nutritious means of animal proteins and represents the largest input cost, of around 75% of the total cost for livestock producers, depending on the species.
Increased demand for livestock products for domestic consumption have made farmers and livestock rearers aware of the fact that the animals should be fed with superior-quality animal feed. The proportion of crossbred animals has also increased over the years, which has generated a higher demand for a better quality and more nutritious animal feed. The market for animal nutrition has also been changing considerably and is becoming strongly competitive owing to its major share in the pet care industry, which is thereby driving the global feed industry.
Current status
The global compound feed production reached almost over 1 billion tons in 2016, with a market size of approximately over USD 400 billion in the same year. According to the estimates of the UN Food and Agricultural Organization (FAO), the animal protein production will increase by more than 60% by 2050, with meat (poultry/swine/beef) production being doubled, and dairy and fish production being tripled during the same time frame. According to the feed surveys conducted by Alltech, one of the top animals feed manufacturers, the production of the global feed industry increased by 161 million MT between 2010 and 2016.
The number of feed mills around the globe was over 30,000 in 2016. Although an increase in the annual feed production was witnessed at a global level of more than 3%, this was achieved with 7% less feed mills. This trend has been most prominent in countries especially in the Asia-Pacific region including China, India, South Korea, and Vietnam. These countries witnessed a decrease of feed mills of around 30%, 39%, 18% and 13%, respectively between 2015 and 2016. This proves that there has been integration in the production of feed, with enhanced feed efficiencies in the system.
Opportunities in the feed industry and its future
The feed industry is in the phase of transition over the last few years, especially in the developing countries. To meet the demand of consumers, feed manufacturers are focusing on manufacturing more customer-centric products and increase their efficiency by searching for alternatives for raw materials, as inexpensive traditional materials are limited.
Awareness about better quality animal products
The quality of products is becoming the prime parameter for consumers, who have become selective about the products they buy. They are becoming aware regarding the quality of animal products they are consuming due to global exposure, growing incidences of disease outbreaks, and are also concerned about the animal’s environment and quality of feed provided to them. This has created pressure on the dairy, poultry, and other animal keepers to be aware of these aspects to meet the consumer demand and government regulations. Thus, the industry is now shifting towards a customer-centric model. 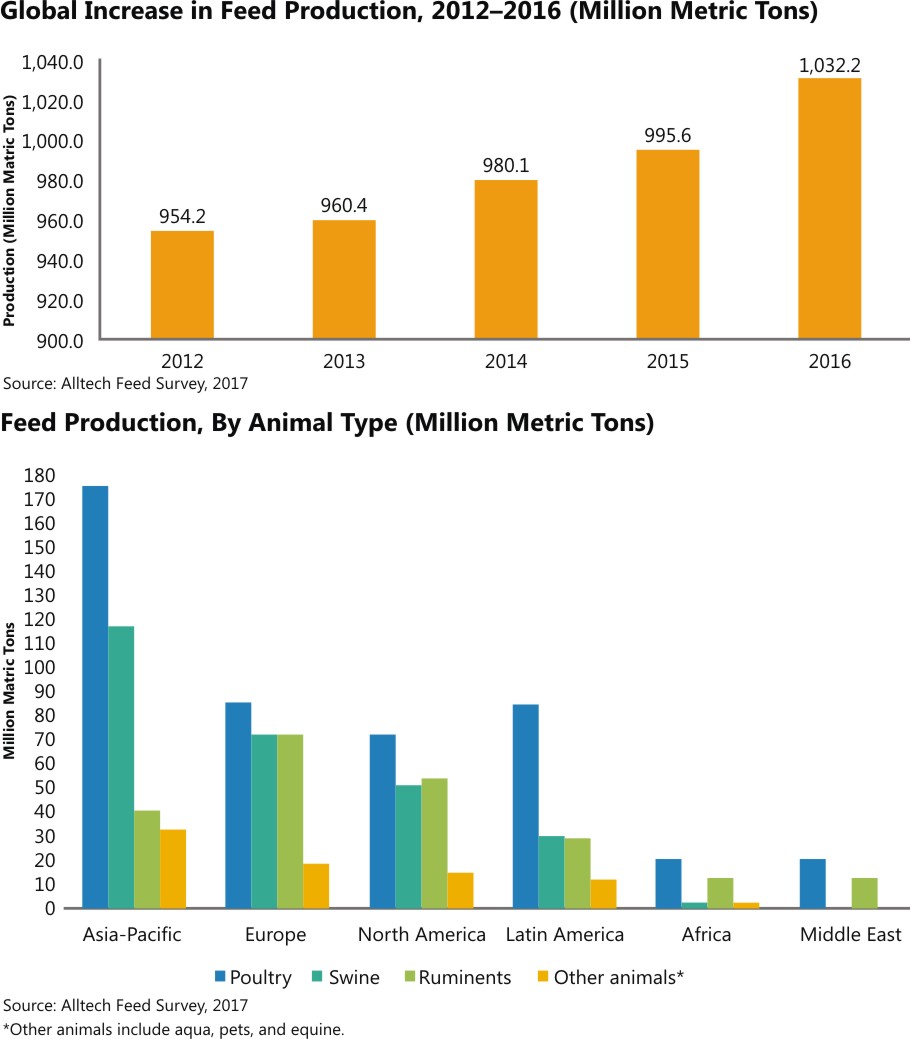 Introduction of technology and innovations in feed sector
Technological advancements will help to increase the production efficiency by improving the accuracy of formulation and consistency. Advanced machinery will also enable feed manufacturers to change the feed consistency and formulation with each batch.
Pelleting technology is now widely accepted, and if used in a more controlled and scientific manner, will provide an opportunity to reduce costs, improve feed quality, and assure food safety. Also, technologies such as NIR and in vitro fermentation are now preferred as the quality testing measures in the production of feed.
Furthermore, the animal feed industry has been experiencing a positive growth due to the introduction of encapsulated feed and its positive effect on livestock health. Encapsulation is a modern technology used especially in feed acidifiers that helps the animals to improve their release and enteric action. It also extends their shelf life and protects them against environmental changes by keeping the liquid, gaseous, or solid substance packed by a tiny millimetric capsule. It also helps producers and animal growers to overcome the problem of efficacy and efficiency of the livestock, which in turn drives the growth of the feed market, globally.
Apart from this, precision animal nutrition (PAN) is also an effective utilization of available feed resources with the aim to maximize a livestock’s response to nutrients. PAN is the process of providing the livestock with feed that precisely meets its nutritional requirements, for optimum productive efficiency to produce better quality animal products and to contribute to a cleaner environment and thereby ensure profitability. It can be achieved through improved feed processing techniques, precise ration formulation based on the nutritional value of each batch of the ingredient, proper weighing & mixing of ingredients, use of feed additives, improved feed processing techniques, and implementation of phase feeding & split-sex feeding.
According to the FAO, balanced rations ensure sustainable livestock production, globally, and such feeding has been shown to promote methane and nitrogen excretion reduction; thereby boosting profits for small-scale farmers due to increased animal productivity.
Biotechnology is another new trend in the feed industry. The increased use of biotechnology for more scientific formulations and new molecules will help to increase the productivity to a large extent. Various feed supplements such as enzymes, vitamins, and binders are already used and are accepted in the industry, which will continue to evolve and will enhance animal health, productivity, performance, and profitability.
Thus, the feed industry will be more digitalized and the complete supply chain will be closed-linked, which will result in a detailed flow of information from farms to consumers.
To increase animal performance, a direct approach can be to reduce the cost of feed so that it becomes affordable. Increasing production efficiency, reducing wastage, and finding new alternatives to traditional ingredients can be the best strategies to lower costs. The traditional key ingredients are becoming costly with reduced availability. Thus, it is now important to find the new alternatives, which are cheaper and nutritional viz. algae.
Sustainability of the feed industry
During this transition, the challenges that the feed industry will face will depend on the rate of adoption and evolution in the industry. The industry will witness major activities in the near future such as mergers, acquisitions, e- commerce, trading and import/export and high use of new IT technology. These activities will be based on the scientific developments and the introduction of new manufacturing technologies in the industry, which will take it the next stage of evolution.