Agriculture is among the major drivers forthe Indian economy and is a principal means of livelihood for over 50% of the population. According to the Indian Central Statistics Office (CSO), the share of agriculture and allied sectors (including livestock, forestry, and fishery) was over 15% of the Gross Value Added (GVA) during 2015–2016(on 2011-12 base prices). India has one of the largest livestock population across the world and its output contributes around 4% of the country’s GDP.
Currently, there is a visible trend of an increase in the consumption of animal-based products, primarily owing to an increase in disposable incomes, change in dietary preferences, and improvement in livestock production practices with evolved transportation and storage facilities.
Given this increase in livestock population, there is a parallel and growing requirement for animal feed products. In India, feed manufacturing on a commercial level and scientific basis started in the year 1965. The industry has since witnessed several shifts and primarily caters to the cattle, poultry, swine, and aquaculture segments.
Current industry dynamics
Presently, the overall crucial demand and supply gap results in immense opportunities in the Indian feed industry and is thus, attracting the attention of several big players. Currently, the industry is fragmented and unorganized and appears to be evolving.
According to the estimates by the Compound Livestock Feed Manufacturers Association (CLFMA), the Indian feed industry stood around USD 15 billion and produced over 28 million tons of feed in 2015. It is still in the introductory stage, as demonstrated by its ability to cater to merely around 10% of cattle and aqua feed demand, and around 50% of the poultry feed demand.
Furthermore, the Indian feed industry is estimated to grow at a CAGR of around 8% from 2015 to 2020, where the demand for poultry, cattle, and aqua feed is expected to play a significant role in this growth, according to a Rabobank forecast.
Based on the current aquaculture production estimates of 1 million tons, against the estimated potential of 7 million tons, it could be inferred that the industry has a significant untapped potential.
Restraints & Challenges
The World Bank annually publishes and ranks economies according to the ease of doing business in the respective economy. A high ease of doing business ranking implies a conducive regulatory environment for commencement and operation of business of a local firm. India, as per the June 2016 rankings, stood at 130th position, out of 190 economies so observed.
Given the lagging status of the country in those parameters, the industry faces several restraints and challenges:
1) Unfavorable trade terms: Comparatively high tariffs on imports of feed ingredients
2) Vague regulatory regime:Lack of uniformity in the quality standards, and rigid and outdated Bureau of Indian Standards (BIS) requirements
3) Bureaucratic bottlenecks: Time-consuming procedure for approvals of new innovations
Current dynamics
The Indian feed industry is in a transition. The significant existing gap between demand and supply calls for rapid evolution, to ensure sustainable production and consumption. Also, in order to effectively cater to the demand, the supply side has to increase its efficiency and introduce raw material alternatives. 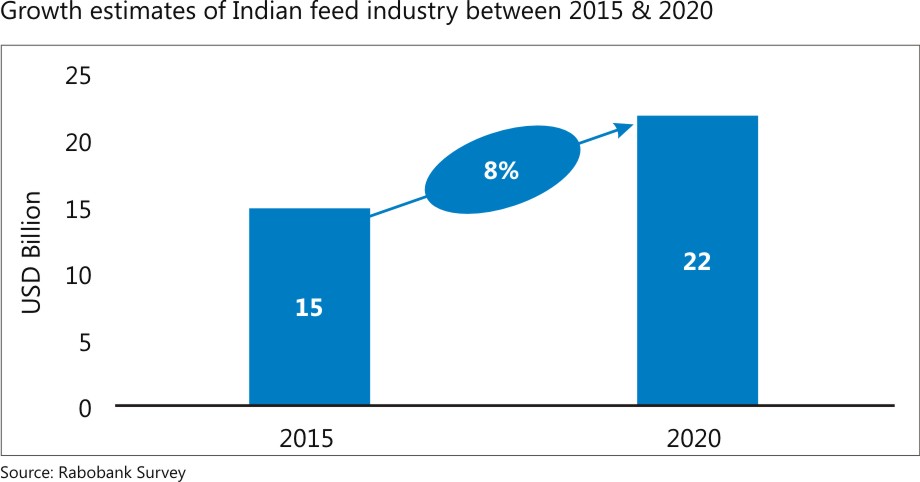 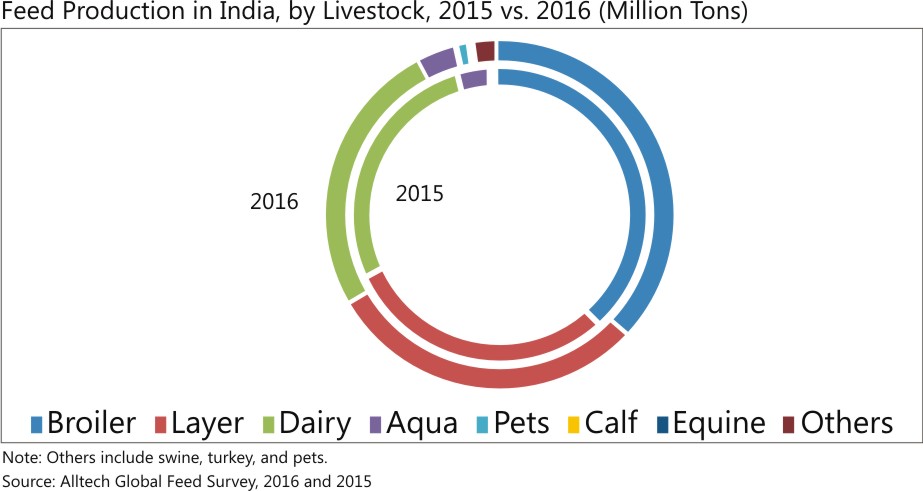 Consumer awareness
With growing nutritional awareness and rising consumer activism, quality is imperative, around which the entire value chain needs to be structured. Consumers are becoming increasingly selective about the products they consume.
In July 2013, Firstpost, one of India’s leading news organizations, claimed in their article based on experts’ observations that India’s policy decisions to ban the testing of cosmetics and their ingredients on animals and the ban on using captive dolphins for public entertainment anywhere in the country make it more progressive than the Unites States in matters of animal rights. In addition, The Prevention of Cruelty to Animals Act 1960 makes it mandatory for individuals in charge of any animal to take all reasonable measures to ensure its well-being and to prevent the infliction of unnecessary pain or suffering.
Owing to the informational efficiency, growing number of incidence of disease outbreaks, and rising concerns regarding animal nutrition and welfare, the supply side is increasingly obligated to respect consumer views and abide by government regulations.The industry is thus becoming more customer centric.
Evolution in production technology
Advancements in the production technology will ensure efficiency on the production side as well. The adoption and usage of sophisticated equipment will not only increase productivity, but will also ensure formulation accuracy and consistency. Essentially, it will enable the manufacturers to change the feed formulation and dynamics based on the requirements.
Among the evolving technologies, the pelleting technique is now widely accepted, and due to its increasing adoption, is expected to provide efficiency with regard to overall costs, improvement in feed quality, and assurance of overall food safety. In addition, technologies such as Near Infrared Spectroscopy (NIR) and In Vitro Fermentation are gradually being adopted.
New ingredients
The traditional key ingredients, including cereals and grains, are becoming increasingly more expensive and scarce. It is therefore imperative to replace these withlow priced and nutritionally rich alternatives, such as algae meals.
The field of biotechnology is largely affecting the development of the feed industry. The increased reliance on biotechnology for scientific formulations will ensure an increase in productivity to a large extent, as it has for the traditional crops.
Various feed supplements, including enzymes, vitamins, and binders are already utilized and accepted in the industry, which is expected to continue to evolve and will ensure the overall animal health, productivity, and performance.
Conclusion
The further evolution of this industry will depend on the pace of the adoption of advanced technologies, aimed at streamlining the production process, while ensuring due consideration for animal and consumers’ health.
On the supply side, the industry is expected to witness several developments, including inorganic growth strategies such as mergers and acquisitions, electronic-based trading, inter- and intra-continental trade, and progressive use of information technology for operational efficiency.
These activities would be based on scientific advancements, and the resultant introduction of new technologies would take the industry to the next stage of evolution. Accordingly, in the next few years, the Indian feed industry would be become self-sufficient and grow at a significant rate.

by Nishikant Yadav, Markets and Markets