Introduction
India leads the world in terms of milk production. The annual milk production is 146MT while the per capita availability is only 322grams.World’s best Buffalo breeds are found in India which are major contributors of national milk pool i.e. ~52%. On comparing per capita availability of milk, India lags far behind developed countries like USA, Israel. Though we have highest number of bovines in the world, but the milk production per animal is very less. The reason being low production potential of indigenous breeds. Even the introduction of exotic milch breeds like Holstein Friesian in India failed to reach their maximum potential. Crossbreeding programe has played an important role in increasing the milk production in the country. But still, these animals need more care, improved feeding and better protection from environment.
Protein, an important constituent in ration of cattle and buffalo, when fed to ruminants is degraded by rumen microbes into ammonia, aminoacid and peptides. Subsequently, these degradable products are utilised by the microbes for microbial protein synthesis, but that process may not be always efficient. Moreover, the excess ammonia produced from the degradation of highly degradable cakes, after absorption from rumen wall is transported to liver, converted to urea and excreted out through urine. It is a mere waste of dietary proteins, plus taxing the animal’s energy which is spent on urea synthesis. Although microbial protein is a good quality protein, it may not be sufficient to meet the requirement of high milk yielding animals. So ruminants may also given proteins which are capable of escaping ruminal degradation, called undegraded dietary protein (UDP) or bypass protein, which are degraded in the intestines and absorbed as amino acids. Thus, to meet the nutritional requirements of high yielding animals, feed technologies like rumen protected proteins can be adopted as it has consistently shown not only increased milk yield, but also improved growth and reproduction.
In high yielding cattle, the output in form of milk is more than the input given i.e. feed especially during early lactation. There are multiple reasons for the imbalance, one being the less appetite which results in lesser dry matter intake after parturition while the protein and energy requirements are high during early lactation. This results in mobilization of body reserves which leads to weight loss and finally decrease in milk production. Supply of high protein in diet is not the only solution because breakdown of protein occurs in rumen by microbes. Hence, to meet its requirements, supply of bypass protein can be a good option.
Advantages of bypass protein:
1. Higher availability of amino acids per unit of feed.
2. Better utilization of protein meals having higher rumen protein degradability.
3. Judicious utilization of protein meals, available in limited quantity.
4. Improves growth and milk production.
5. Improves protein percent in milk, hence SNF content of milk.
6. Improves fat percent in milk.
7. Better economic returns, for same input cost.
8. Useful for low and high yielding animals, relevant to Indian conditions of feeding and management.

Walli (2002), in his review on bypass protein, reported that inclusion of bypass protein in diet of milch animals has a great potential of increasing milk production in developing countries. Komagiri and Erdman (1992) reported that there was increase in milk production in HF cows that were supplemented with increased levels of rumen undegradable protein. Due to negative energy balance, dairy cows may show longer service period as they suffer from nutritional infertility. A few natural feedstuffs have some degree of rumen protection and important ones are enlisted in Table1. 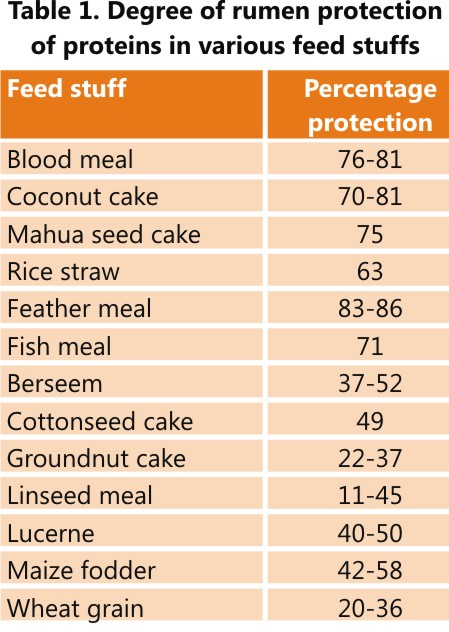 Bypass protein is an important source for meeting requirements of high yielding animals but better results can be obtained when dietary protein has degradable and bypass protein in the ratio of 40:60. The rumen degradability of proteins can be artificially prevented by treating the protein sources in such a way to decrease its availability for the rumen microbes. The easiest and most common method is heat and formaldehyde treatment. According to Gulati et al. (2001) bypass protein supplements for dairy cow should contain high level of crude protein, optimum essential amino acid profile, 70-80% rumen undegradable protein with near about 80% of digestibility in small intestines.
As discussed earlier, there is some degree of natural protection of feeds. Further, proteins can be artificially protected from ruminal degradation by following methods:
a. Chemical protection
Proteins are chemically protected by treating with substances like tannins, formaldehyde, glutaraldehyde, glyoxal and hexa-methylenetetramine. But formaldehyde treatment is most commonly used. Formaldehyde treatment has been found effective in improving the bypass protein (Walli et al., 1980) in oilseed meals, hay and silage. 0.5-1.5, 1-3 and 3-5% formaldehyde is used for protein protection in concentrates, hay and silage respectively. Formaldehyde treatment not only increases the rumen undegradable protein in feed stuffs but also increases its acceptability by animals.
Treating protein meals with formaldehyde has the following advantages
1. Desired level of protein protection can be achieved
2. Under and over protection of proteins can be eliminated
3. The bio-availability of the essential amino acids can be maximized
4. It does not increase the proportion of ADIN and NDIN contents
5. Economical
6. The HCHO treatment of groundnut cake arrests further growth of fungi and thus production of mycotoxins in the cake. 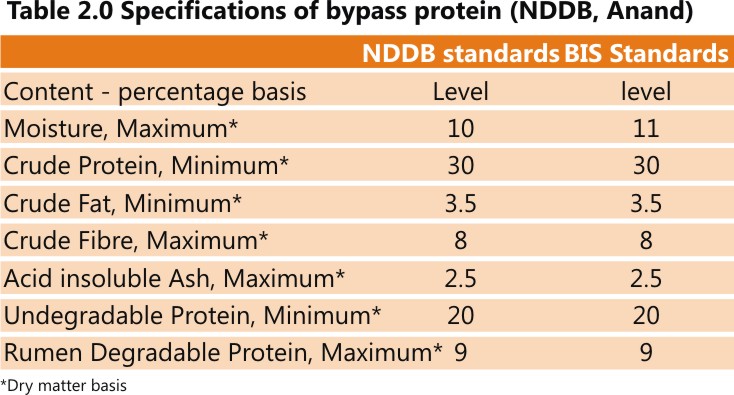 b. Heat treatment
Heat treatment to feed stuffs has been found to increase the protein protection (Senger and Mudgal, 1982). It works on the principle that heat treatment causes denaturation of proteins which provides effective protection against microbial attack. Heat treatment at higher temperatures reduces the availability of some amino acids like cystine, arginine so to reduce such losses, steam treatment has been found fruitful. Steam treatment increases both bypassability and digestibility of proteins. However, heat treatment is much costlier and economically not viable.
Conclusions
High yielding dairy animals have high nutritional requirement. During early lactation, if the dietary intake is less than the milk production, they can reach negative energy balance. Feeding of bypass proteins is one of the best methods to meet these requirements. As it directly reach the small intestines escaping the rumen degradation and is available to meet high protein demands of animal. Bypass proteins will also help to maintain normal fertility. Hence, the farmers are advised to adopt mentioned feeding strategies for maximum benefits.
(After getting very encouraging results from a collaborative trial conducted on bypass protein jointly by NDDB and NDRI, Karnal, NDDB initiated a commercial manufacturing of bypass protein for more than a decade ago. Today, they are supplying bypass protein daily to millions of dairy farmers all over the country. So far, not a single farmer has reported any adverse effect of this technology i.e. the feeding of bypass protein).