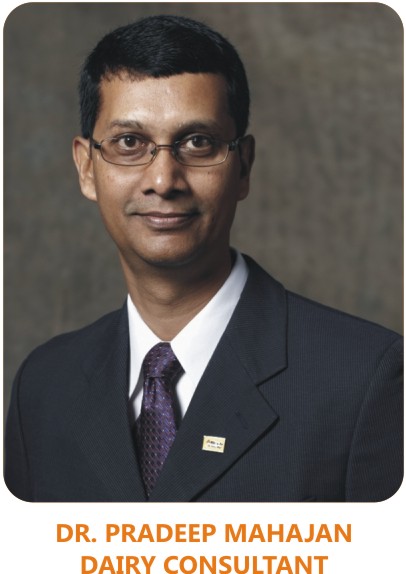 Please throw some light on the challenges faced by Indian Dairy industry and way forward for the industry.
I will restrict myself to dairy farming, an important section of the whole dairy industry. In dairy farming, our biggest challenge currently is how to transform it to modern farming. High input costs – feed, fodder & labour are rendering our “Low input – Low Output” farming model uneconomical and unattractive. But barring some exceptions like Punjab, successful transition to modern farms is not happening on large scale. In turn, this is due to lack of knowledge and skill in how to manage a modern dairy farm and supply of good quality green fodder.
High land prices & competition with food crops is making fodder cultivation costly & difficult. Unless all regions find a “window” in the cropping pattern where fodder crop does not compete with food crop, it will be difficult to get large scale plantation of fodder crops. The second and more critical step will be establishing a market / price discovery mechanism for fodder crop. People have tried contract growing of fodder, but when they don’t know as what is the fair price of the crop, both sides will remain dissatisfied and hence the system will not sustain.
Record-high stock levels of feed ingredients are set to keep worldwide commodity prices low during 2017 according to a Rabobank report. What is your outlook for Indian commodity market ?
We are already seeing the effect on eased soyabean meal prices. They are expected to remain flat. In case of maize, India is not directly connected to the world market. It needs Government intervention. As of now, due to a poor crop in Tamil Nadu and less than expected crop in Karnataka and Orissa, prices are firm. In case the rabi crop falls short, we might have to import maize again like last year.
Do you think that the silage making technology does have the potential to be used by the larger number of farmers in India, so that the conserved green fodder can be used during lean periods ?
Off course, silage, when properly made, has huge advantages in terms of cost of feeding, animal performance, quality and consistency of nutrients. The technology has a great potential and in future as more and more farmers get convinced of its benefits.
Demonetization has also hit the Indian poultry and livestock industry, how do you see its impact on the sowing of rabi crops and the subsequent effects?
I don’t think any farmer will miss sowing in time. So, those who were unable to procure certified seeds, will have shifted to own seeds / grains, hence, as such, area under cultivation will hardly get affected. Effect of quality of seeds and other inputs remains to be seen.
What needs to be changed in terms of feed safety to make the feed chain more sustainable?
The answer depends on how you define feed safety. If it means preparing feed which ensures health and wellbeing of animals, we are doing a reasonably good job. For an industry producing more than 30 million MT of feed annually, we have had no significant incidences.
But if you define feed safety to include preparing feed which ensures health and wellbeing of animals, environment and safety of foods of animal origin, then a great deal remains to be done. On food safety itself, we are struggling with the basics like hygiene, containing microbial risk and chemical risk. Affordability of food remains a big factor in defining what constitutes food safety for us. When we have enough awareness on food safety, it will translate into feed safety. In absence of market forces, a traction from the market and willingness to pay for additional costs, a major part of food & feed safety will remain in theory.
According to recent Rabobank report, China will return to International market for Feed ingredient imports. How will it impact worldwide commodity market?
China is already buying soybeans this year, but it has not had any major impact on international prices, mainly because of the record crop in the U.S. and very good outlook for Brazil & Argentina. Only the weather & flood situation in Argentina can have an adverse impact if it worsens, but otherwise, corn & soy prices are expected to remain stable.
What future challenges do you see in Indian feed industry? What would the feed industry look like by 2020?
We already had competition between fodder & food crops, now we will have more and more feed versus food crop competing for land use. This will entail imports of feed ingredients. India is already importing significant quantity of sunflower meal and last year, corn was imported. How soon major imports become a reality will depend on the Government policy, especially regarding GM ingredients. As and when that happens, feed industry will undergo a major change. Starting from geographical location to handling and storing of ingredients, requirement of working capital, everything will change.