Mixing
The nutritionist provides a recipe to optimize growth, production and health of an animal. The recipe is a balanced diet that supplies nutrients at desired level to animal. The batching or proportioning system in a feed mill does the job of weighing raw materials accurately as per recipe. Basically, batching is a sequential process. Hence bringing homogeneity of ingredients is a key factor in animal performance. Otherwise, the animals would not get balanced diet. Secondly, the complete homogeneous mix of mash feed will produce good quality of pellet.
The batch mixer in a feed mill does the job of bringing uniformity in feed ingredients. By design, there are two types of blenders predominantly used in feed mills, namely

The blenders use, single shaft or double shafts based on capacity of blender. Higher capacity blenders use twin shafts. The mixing time is less in case of twin shaft blenders compared with single shaft blenders. Based on mixing operation, the mixer is classified as Static mixer and Dynamic mixer. This is another type of classification. In Static mixer, one batch of material is in mixing process at any given time. During that time, inlets and outlet of blender are closed. In Dynamic mixer, mixing is continuous. In other words, both inlet and outlet of mixer are open. So that the material is continuously enters the mixer, gets mixed and discharged from the mixer. 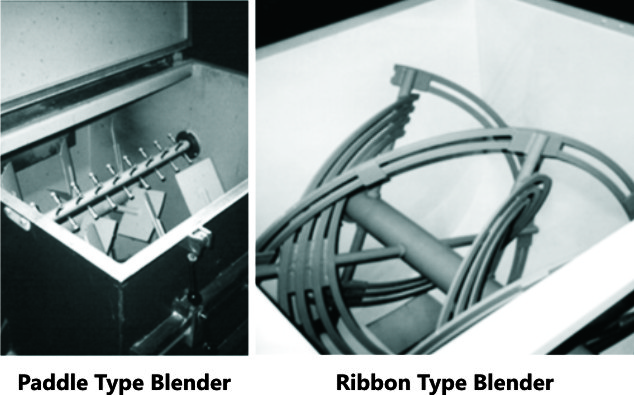 The batch size of mixer is calculated based on working volume of blender and mash feed bulk density.
Batch size = Working volume X Bulk density of mash feed
Another important factor is mixing time. It determines the productivity of feed mill. It also influences the feed quality in the aspects of homogeneity. The variability in mixer is expressed in % of Co-efficient of Variation (CV). CV test is an important Critical-To-Quality (CTQ) factor and should be checked periodically to ensure Feed quality.
Challenges in Mixing
The performance quality of grinding, conditioning, pelleting and cooling can be judged by physical observations. The challenge in mixing process is the quality of mixing cannot be judged by physical observation. Hence the mixer performance should be monitored periodically, and the mixing equipment should be maintained in proper working condition. To ensure both CV Test should be performed periodically as per the Standard Operating Procedure (SOP).
Mixer performance test – CV Test
CV test is the common test used to study the mixer performance. The CV test reveals the amount of variation presents in the mixer. For example, when CV of a mixer is 10%, then it produces feed with 10% non-uniformity. The CV test procedure consists three steps

Any ingredients which is less than 0.5% in recipe can be taken for analysis. Also commercial micro tracers are used for CV test, which are inert in nature. 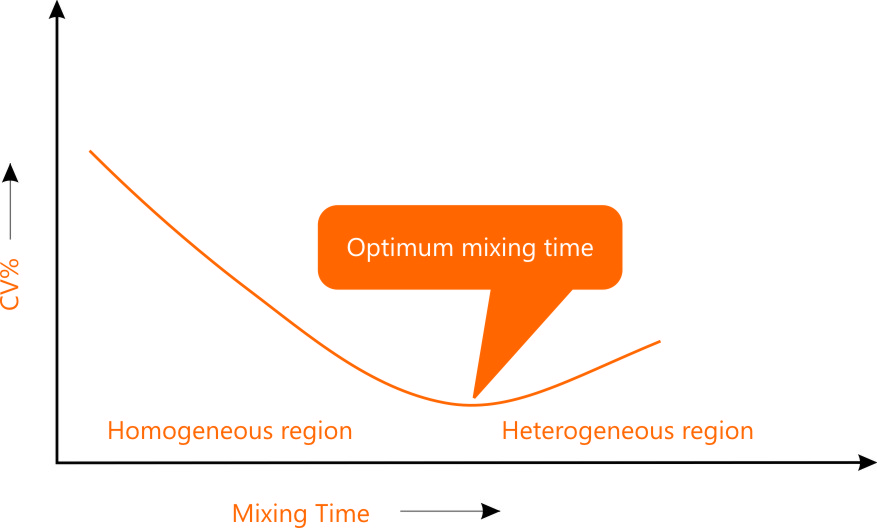 decreases. But beyond certain time, segregation of ingredients starts or variation increases. The point at which the variation is at its best minimum value, called the optimum mixing time. Refer the graph
Sequence of mixing operation
Mixing is a sequential process. All ingredients are charged into mixer sequentially. The sequence is expressed in the following flow chart and cannot be changed. The deviation 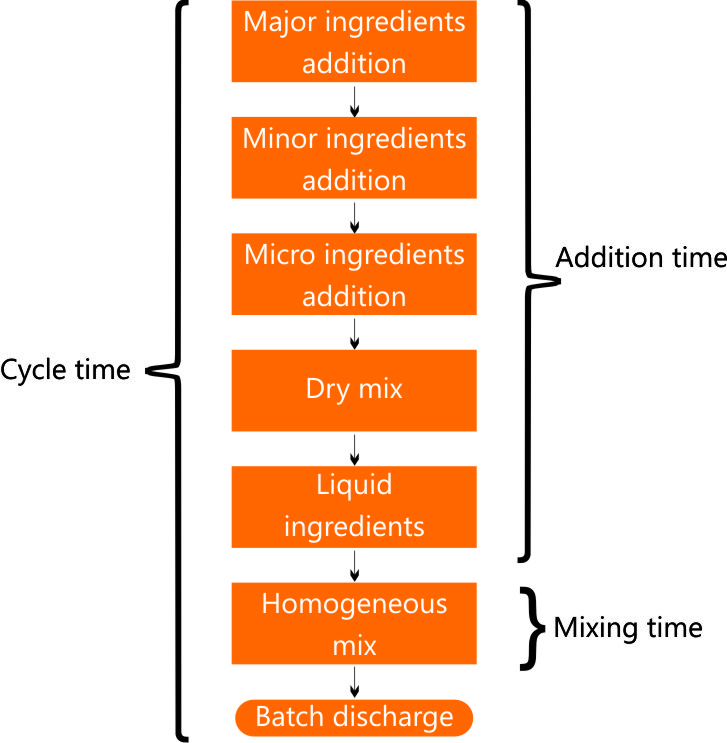 from this sequence will increase variation and affect the Feed quality. The PLC programmer takes care of sequence of operation with interlocks to avoid errors. Cycle time is sum of raw material addition time and mixing time. In other words, for each cycle time, one batch will be discharged from mixer. When cycle time is more, the productivity of the plant decreases and vice versa. During pilot production, the operation team should do few trials to evaluate actual mixing time through CV tests for their own recipe. In regular operation, the QA team should check and verify the sequence, dry mix time and mixing time to ensure the quality of feed.
Residual ingredient built-up in mixer
The mixer should be clean and free from built-up of material. These materials are basically nutrients and have high moisture. Hence these locations are potential points for microbes like mould and bacteria to grow. These points are called black spots where microbial contamination starts. Picture shows potential microbial contamination points. Scrapers should be used to remove such materials. Built-ups are very high in Cattle feed mill, because the recipe contains molasses. Extra care should be taken in cleaning of mixer.
Over load or under load of mixer
Once the batch size is a derived, it should be maintained as a constant. Increase and decrease of batch size from the derived value will over load or under load the mixer. 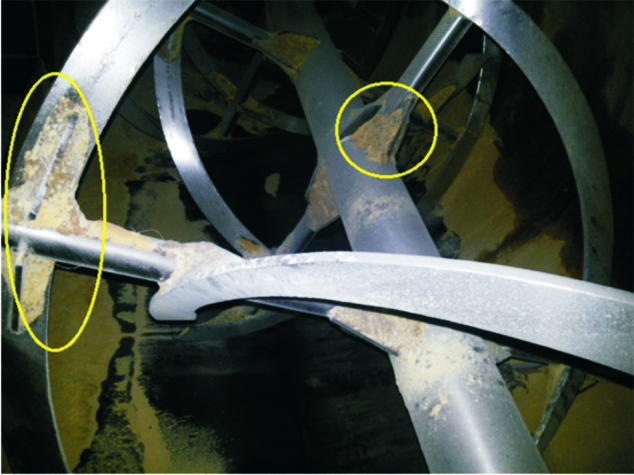 This will affect the mixing performance.
Leakage at inlet and outlet gates
The ground ingredients are stored in two or three different bins above batch mixer. There are slide gates or dosing gates or flaps at the bottom of bins. Similarly, there is a flap at the bottom of mixer to discharge the materials after mixing. Leakage at gates of bins or mixer flap leads to over load or under load the mixer. As a result, it affects the mixing performance. Leakages at gates are not visible from outside. Hence leakage should be checked critically.
Dripping of liquid at spray nozzles
The liquid ingredients in the recipe are dosed and sprayed in mixer through nozzles by liquid proportioning system. There is a possibility of dripping of liquid from the nozzles after dosing the liquid ingredients. This creates cleanliness issues inside the blender. Hence dripping of liquids should be avoided by incorporating systems like self-cleaning nozzle.
In addition to above check points, the following points should be checked to have effective mixing process