Mycotoxins are secondary metabolites of low molecular weight produced by a wide range of fungi, principally molds. There are over 200 species of molds that produce mycotoxins. Aflatoxins (AF), zearalenone (ZEN), ochratoxin A (OTA), fumonisin (FUM), trichothecenes such as deoxynivalenol (DON) & T-2 toxin are some of the mycotoxins that can significantly impact the health and productivity of poultry species. These toxins are found as natural contaminants in many feed ingredients of plant origin like cereals, seeds, fodder etc; hence mycotoxins seem to be the most relevant with respect to feed contamination and have a significant economic impact on the livestock industry.

Many published scientific studies and surveys regarding mycotoxin contamination for India are usually limited to a single ingredient, very small time period or have a small sample size for the study. In order to have a better understanding mycotoxin prevalence in animal feed ingredients in India, the present study was done for 10 months in which a total of around 540 raw ingredients samples across India were collected and analysed for Aflatoxin (AFLA), Fumonisin (FUM), Ochratoxin (OTA) and T-2 Trichothecene (T2).

A total of 540 samples, including 126 corn samples, 69 corn Gluten Meal, 57 DDGS, 72 Mustard DOC, 70 Rice Polish, 95 SBM and 51 other samples like fish meal, MBM, groundnut cake, Deoiled Rice bran (DORB) were sourced directly from animal farms and feed production sites from different regions.  The origin of these samples was diverse, covering all the regions across India.

Ideal sampling methods were adopted during the sample collection. All the samples that were received for the study were grounded and homogenized.  A subsample was then taken for the subsequent analytical process.

A choice was made to screen the mycotoxins which included Aflatoxin, Fumonisin, Ochratoxin, and T2, or analyze to the only Aflatoxin in selected samples.

ELISA analysis was performed with a commercially available test kit (Vertex® brand of diagnostics from Neogen®). These kits are often viewed as the gold standard by the food industry for mycotoxin testing approved by GIPSA and AOAC. By running multiple controls and establishing a standard curve through a reader, samples can be plotted against the curve to determine the concentration of analyte present.

The overview of the survey results are as follows:

Mycotoxin survey was conducted for the different feed ingredients collected from all over India. The followed guidelines of 2006/576/EC, EFSA and US FDA were followed for citing the maximum tolerance limit of various mycotoxins in Poultry.

Three levels of contamination have been defined for each mycotoxin.

Various studies have established that ingredients having below LOD mycotoxin can also exert the negative impact on animal performance due to synergistic & additive effects of multiple mycotoxins.

A total of 540 raw ingredient sample were analyzed for the survey. The percentage of contaminated samples and risk levels for each mycotoxin is represented in Figure 1.

After getting the overall mycotoxin contamination pattern, we analyzed the levels of mycotoxins in each feed ingredient. The resulting patterns are depicted from Figures 2 to 7 showing normal samples, contamination samples and above tolerance level for each mycotoxin. 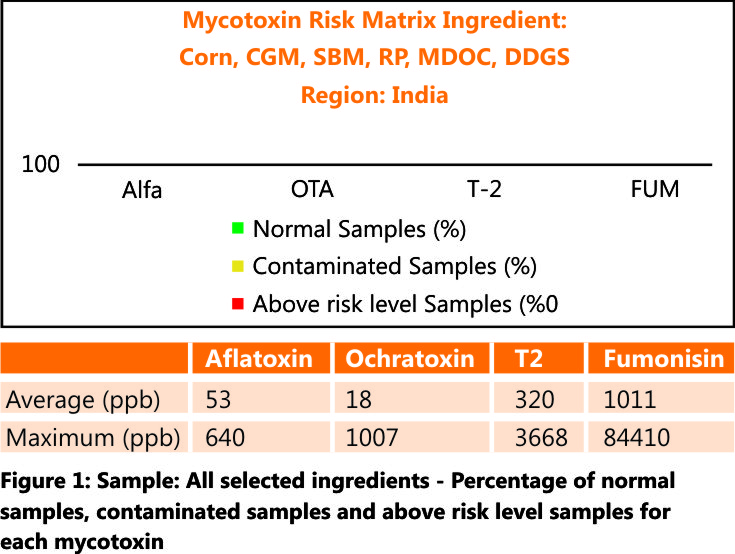 Aflatoxin contamination was found to be higher for corn and 52%  samples were above risk level that was very critical as corn is predominantly used in animal feed.  Ochratoxin, followed by fumonisin is having comparatively less contamination. (Figure 2) 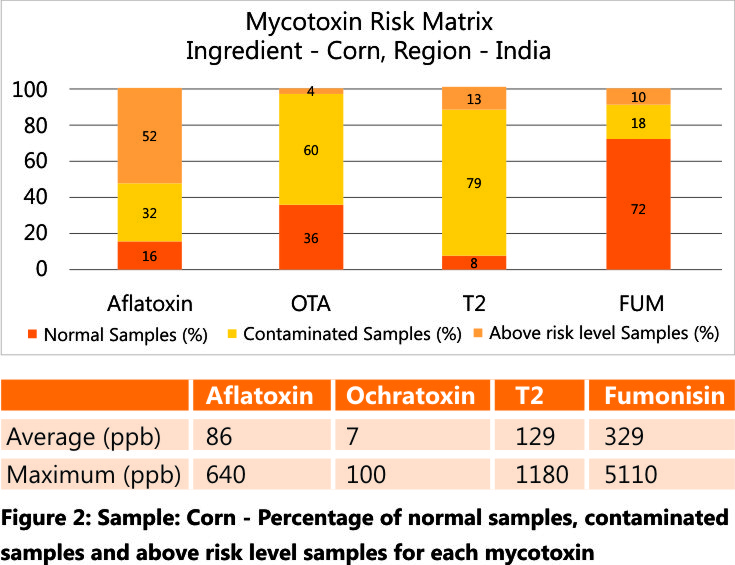 Corn Gluten Meal samples were found infested with all types of mycotoxins studied. T2 & aflatoxin were found to be predominantly followed by fumonisin&Ochra. High contamination could be due to improper processing and poor storage. (Figure 3) 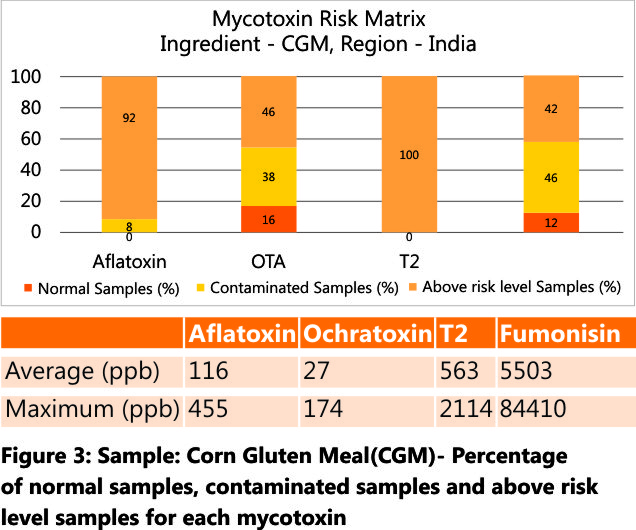 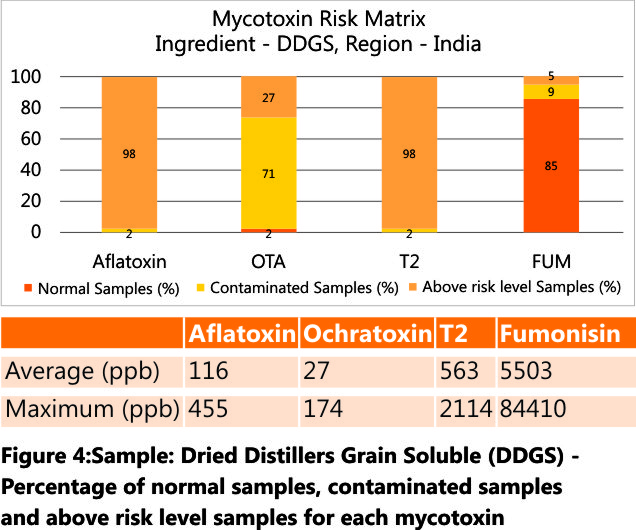 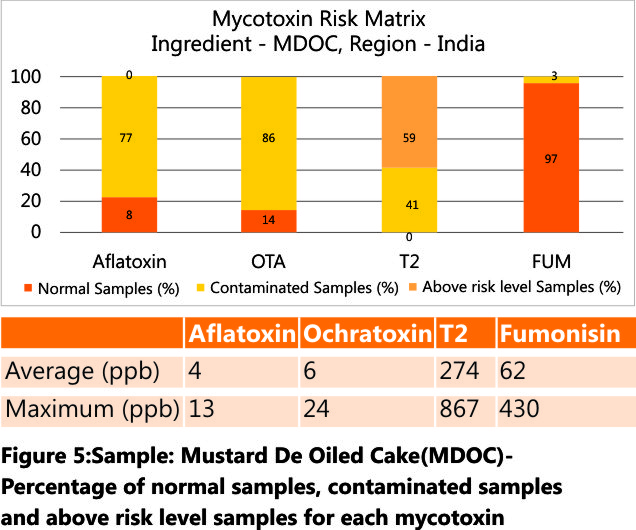 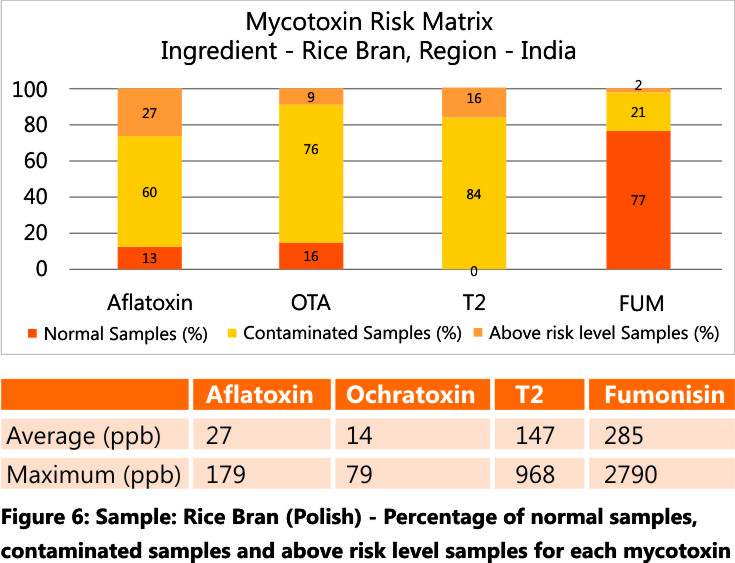 SBM is always a good source of protein and widely used in poultry feed. Our study reveals that 28% samples were above the risk level for T2. SBM is a comparatively clean ingredient in term of mycotoxin infestation. (Figure 7) 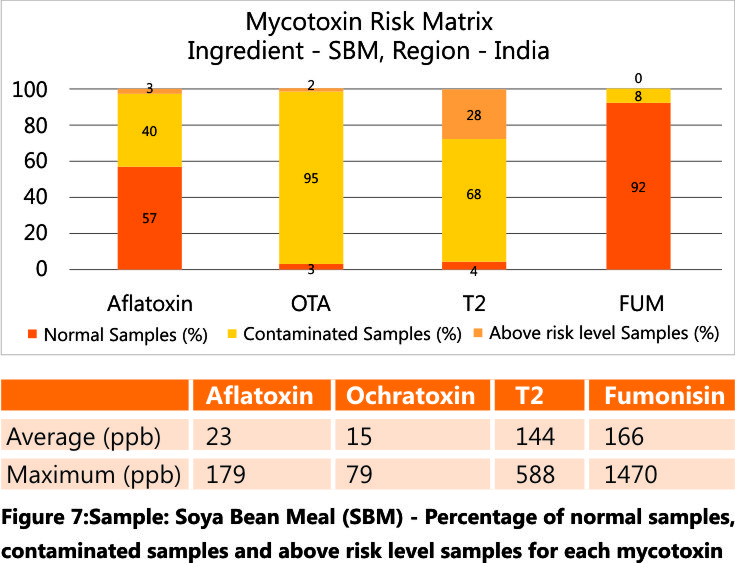 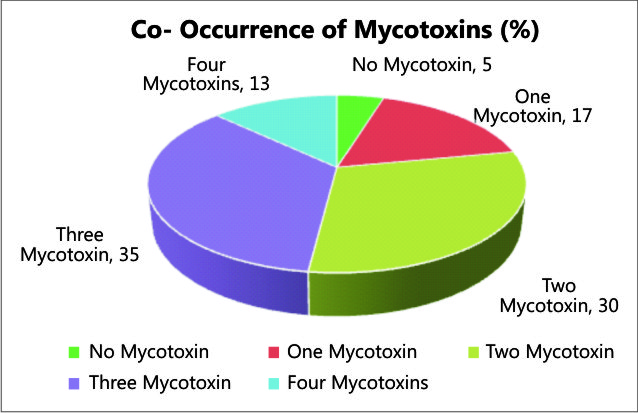 Feed Ingredients were received from the variable regions of India for mycotoxin analysis to get a pattern of mycotoxin prevalence.

The results of the analysis are displayed in Figure 9-12:

Samples received from the eastern region of India comprising of the states Bihar, Jharkhand, Orissa, West Bengal reflected a high contamination (above risk level) with T2 followed by aflatoxin. All DDGS & CGM samples were above the risk level for T2 & Aflatoxin.(Figure 9) 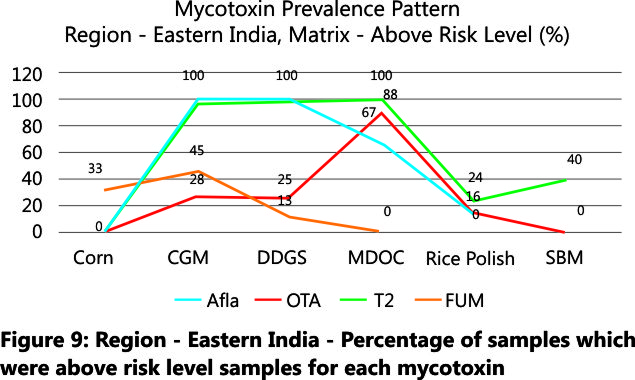 The results of the samples received from the northern region of India, which comprises of Punjab, Haryana, Uttar Pradesh, Uttarakhand, Himachal Pradeshstates indicatedcontamination by T2 and Aflatoxin. Here also, all DDGS and CGM samples were above the risk level for aflatoxin and T2. SBM wasa comparatively clean ingredient. (Figure 10) 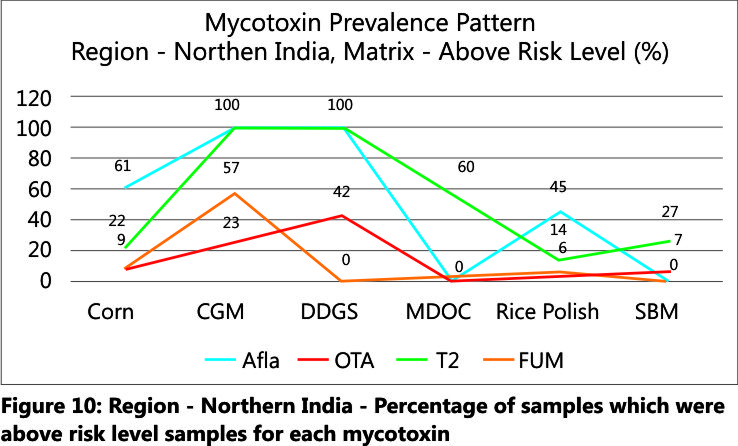 In South Region, which comprises of Andhra Pradesh, Karnataka, Kerala, Tamil Nadu & Telangana states, T2 was a major cause of concern for CGM, DDGS & MDOC in southern India as well. Rice polish and SBM were comparatively clean ingredients. (Figure 11) 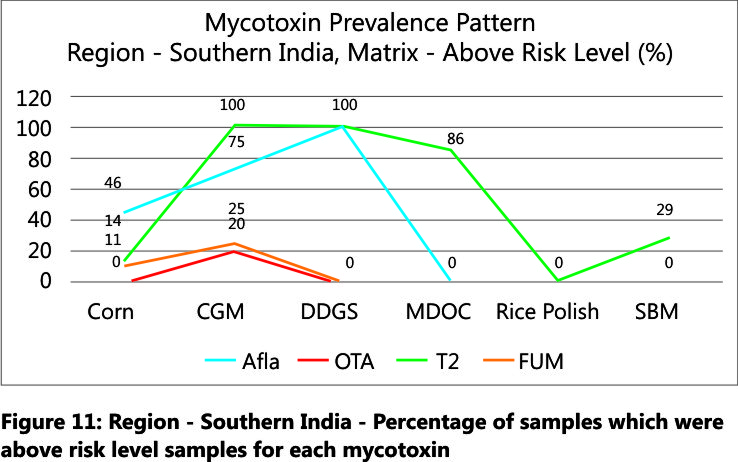 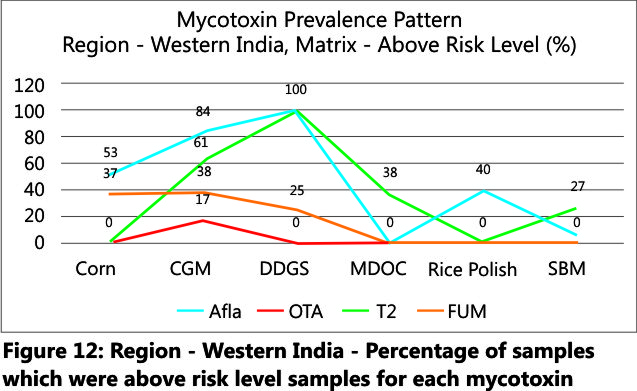 Region wise mycotoxin survey of the feed ingredients from all the Northern, Southern, Western and Eastern regions of India had shown a presence of multiple infestations of mycotoxins.

Analysis of the mycotoxin risk is critical for providing recommendation and advice on the quality control of the various raw material and ingredients.  A special focus needs to be given to prevent the adverse impact of mycotoxins on animal health and performance. The mycotoxin survey conducted by Provimi (India) is going to be an important tool to approach the mycotoxin risk management for the poultry producers in India.

References are available upon request.