Introduction
India holds first position in the world banana (Musa paradisiaca) production (FAO statistics, 2019). Banana is an edible fruit produced by plants of genus Musa which is herbaceous perennial that is grown mainly in the tropics. In India, Musa paradisiaca is commonly cultivated. Both raw and ripe forms of banana are consumed by people (Mohapatra, Mishra &Sutar, 2010). In Kerala, raw banana is mainly used for banana chips production. There will be a great demand for chips especially during festive season. As a result, large amount of waste is generated from chips manufacturing units in form of banana peel which is a highly perishable product when kept in open. Vegetable and fruit wastes could be effectively incorporated in livestock ration thereby reducing environmental pollution (Bakshi, Wadhwa &Makkar, 2016).
Nutritive value of banana peels as silage
Banana peels have numerous positive attributes, making them suitable as animal feed and as an alternative complementary feed during periods of forage shortage. They have high moisture content (around 15% DM), which helps animals to stay hydrated.
Banana peel is rich in fibre, vitamin B6, vitamin C, potassium, antioxidants, magnesium and low in sugar, fats and cholesterol (Dhake, Jain &Lakhawat, 2019). Afibre content of around 30% compared to the fibre content of around 45% in most grass speciesalso produce a laxative effect in the animal. This gives the peels an improved digestibility and subsequently an elevated intake compared to those of grasses (60.6% digestibility of DM and 58.6% digestibility of organic matter).
Further, banana peels have been reported to contain high tannin contents. Feeding tannin-containing feeds which tend to increase milk yield and protein content, probably because they protect the dietary protein from rumen degradation. In addition, they provide sufficient amounts of glucose, which is fundamental for the upkeep and beneficial capacities in ruminants.
Ensiling can be done to preserve the banana peel and can be used for feeding ruminants later (Elahi et al., 2018). Ruminants especially goats are considered to be better converter of fibrous feeds which enables the efficient utilisation of several unconventional feeds and roughages. Hence raw banana peel silage has the potential to be an alternative livestock feed for cattle and goats. Only limited researches had been conducted on scope of raw banana peel silage. Hence the present study was conducted to determine the method of raw banana peel silage preparation and its quality assessment.
Materials and Methods
A preliminary study was conducted in Department of Animal Nutrition, College of Veterinary and Animal Sciences, Pookode to determine a standardised method for raw banana peel silage reparation and to analyse its quality. Raw banana peel procured from local banana chips shops was used for silage preparation. The whole study was conducted as three trials. In the first trial, raw banana peel was chopped manually to a length of 2 cm or less to ensure better packaging. This was filled compactly in plastic buckets and sealed anaerobically. Silage samples were kept in triplicates and these buckets were incubated for 45 days (Elahi et al., 2018). After the specified time the buckets were opened and assessed the silage quality (Jais& Rashid, 2017).
In the second trial, the ensiling period was fixed as 21, 28, 30, 35 and 45 days. Different sets of silage samples were prepared by filling, chopped banana peel compactly in double layer polythene covers and then kept in buckets and later these buckets were subsequently sealed anerobically. After the specified ensiling period, pH and physical characteristics were determined in triplicates (Jais& Rashid, 2017).
In the third trial, additives such as urea, salt and jaggery were added at the levels of 0.50, 1.00 and 3.00 per cent respectively along with chopped banana peel. They were filled in double layer polythene covers and kept in buckets and later these buckets were sealed anerobically. A total of four sets (banana peel without additives, banana peel with urea, banana peel with salt and banana peel with jaggery) with triplicates each were ensiled and each set opened periodically from 21st to 28th day. Later the pH and physical characteristics of silage were analysed (Jais& Rashid, 2017). From these three trials, the best method was chosen for silage preparation in bulk. Proximate principles of silage and banana peel were analysed as per the methods of Association of Official Analytical Chemists (AOAC, 2016). Van Soest method of fibre determination (Van Soest, Robertson & Lewis, 1991) was carried out to determine neutral detergent fibre (NDF) and acid detergent fibre (ADF). The calcium and phosphorus content of samples were determined by standard procedure (AOAC, 2 016).

Results
In the first trial i.e., when the ensiling period was 45 days it was found that the silage got 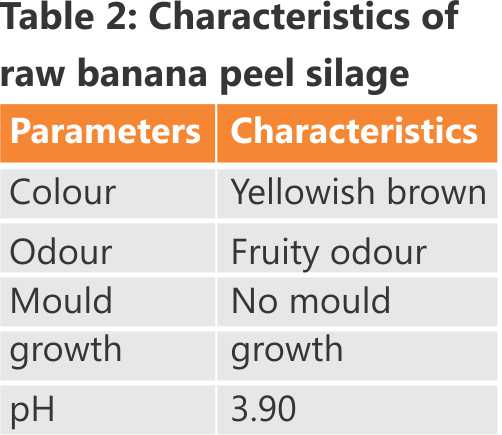 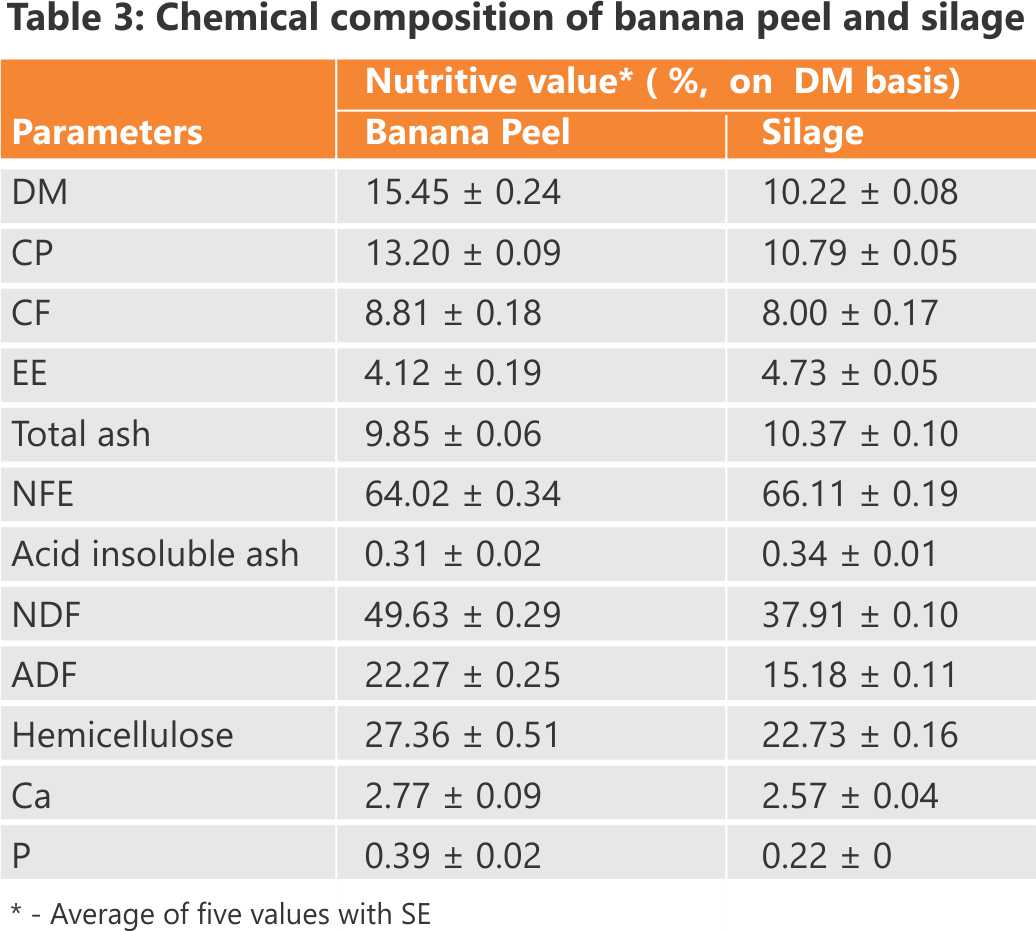 Conclusions
Based on this pilot study it was concluded that ensiling period for banana peel with jaggery as an additive at three per cent level was 24 days. The physical characteristics as well as the chemical composition indicate that raw banana peel silage can be used as substitute for roughage. Since raw banana peel is available plenty in Kerala it can be preserved as silage in bulk and can be used later for feeding ruminants.
Source: Indian Journal of Pure & Applied Biosciences (IJPAB)
By College of Veterinary and Animal Sciences, Pookode