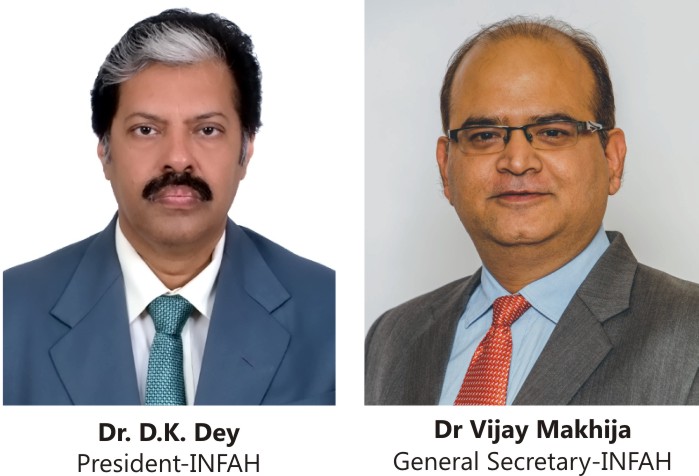 Would you please throw some light on the milestones achieved by INFAH in its 6 years journey? Also, share details on the role that association has played in taking INFAH on the world map.
Indian Federation of Animal Health Companies abbreviated as INFAH, is a non-profit, non-governmental organization working towards the common goal of raising the standards of domesticated animal health care in India. INFAH is the cohesion of progressive Indian and multinational animal health companies and represents the animal health industry. INFAH takes up the issues with common denominator to the Regulators and different governing bodies of the country, including various Ministries.Internationally, INFAH partners with global animal trade bodies and thereby creates stronger image for the Indian animal husbandry and animal healthcare industry. INFAH is also affiliated to global organization “Health For Animals”
Few accomplishments of INFAH as below

CSR Initiatives: INFAH has been extending its support in the adverse times of Kerala Floods, Chennai Floods, in addition supporting the awareness drive of egg consumption through participating in world egg day events
Since the inception of INFAH, what improvements have been made in Indian veterinary medicine regulatory process? What major lessons can be taken from Global veterinary medicine regulation system?
Since its inception INFAH recognized that working on Regulatory reforms at National level as well as International will be cornerstone of INFAH’s roadmap. To support this initiative INFAH created its subcommittee involving Biologicals, Therapeutics, Feed supplements, Herbal, Human Resource, GMP (Good marketing practice) and CSR.
At INFAH our challenge was unique – at National level the industry had to deal with Regulatory bodies like CDSCO, MOA, DADF, DGFT. ICAR, IVRI, FDA, MOH, AYUSH etc. At International level INFAH members continue to face challenges of market access, lack of harmonization in Regulatory process.
The pool of experts in various subcommittees cited above dealt effectively with the challenges like FDC, IP (Vet), GST, International Market access, Herbal segment, AMR etc.
As far as learning form the best practices from Global Veterinary Regulatory system we can aim for the following

We believe that with these initiatives we can make acceptability of Indian Animal Health  Companies for a better market access, investment on technology and Research.
26% of animal health business comes from the herbal segment (as stated by Dr. Dey in an interview). What are the hurdles and strengths of this sector?
The herbs are part of medicine since years. With the evolution of medicines, the herbal products have created a niche in the treatment and prevention of disease in human and animals. The age-old herbal industry is not without concerns or hurdles which is preventing its natural growth. However, the herbal formulation manufacturers face issues like,
a) No specific guidelines for categorization of herbal products whether into therapeutics or feed supplements, licensing of herbal extracts, licensing of herbal feed supplements, no specific guidelines for approval, allowed usage of only BIS/ IP excipients.

Ayurvedic Veterinary Sector has grown faster than the industry growth rate in past few years and we expect the growth rate to be even better in the coming years.  Favorable perceptions about the impact of Ayurvedic Products on food safety and minimal side effects provides attractive opportunities in this sector.
Indian Animal health market is poised to increase from 39,200 MINR in 2016 to 75,000 MINR in 2020. Can you please share species-wise predictions?
Outlook of Indian AH Market: Indian AH market is expected to register a CAGR of around 8-10% during the forecast period 2018-23.  Species wise projected growth rates would be Dairy @12-15 %, Poultry@ 8-10 %, Companion Animal @ 18-20% and Others @ 8-10%.The high growth of the market is mainly attributed to growth in livestock sector due to continuous domestic consumption and technology intervention coupled with emerging risk of diseases of economic and zoonotic significance.
Indian market provides immense opportunities that are expected to drive the growth of Animal Health Market in India.
AMR (Antibiotic Microbial Resistance) has been a topic of interaction in most of the worldwide forums. How would you define this issue in the context of developed countries viz-a-viz developing countries?
INFAH propagates appropriate use of antibiotics for treating bacterial diseases. Internationally, EU does not allow use of medicated feed additives, but it would be wrong to say that the use of antibiotics is banned. Antibiotics are still being used in developed and EU countries in animal production for the treatment of bacterial diseases and MRLs are well defined. In our country, the poultry meat that had been randomly tested for antibiotic residues, and found to contain antibiotics, are in fact lower that the antibiotic residues levels (MRL) prescribed even by EU countries, although, the MRL levels in India are yet to be standardized. Since, the antibiotic residues detected are much lower than the MRL followed by EU countries; the findings would not cause any harmful effect to the consumers, except for the negative publicity and economic loss it caused to the poultry farmers. However, INFAH has been communicating to the farming and allied communities for judicious use of antibiotics as per the withdrawal period mentioned on the label of respective products and has also taken up the issue with the concerned on false alarms being raised on faulty interpretation.
What actions can be taken to improve the awareness of vaccination and preventive healthcare in the Livestock sector?
Communication:  Leveraging the omni channels (Conventional & digital tools) to share the benefits of vaccination in terms of profitability & sustainability of animal production systems
Collaboration: Collaborative research and development for bringing novel and improved preventive animal healthcare products. Assignment of contract research projects related to new challenges being faced by Poultry Industry Serotyping of disease-causing agents for accurate diagnosis and subsequently bringing out the effective prevention and remedial measures
We have realized that one of the limitations of our industry remains R & D.  On one hand, the relatively smaller size of the industry and lesser price attractiveness have resulted in this situation. However, with the growing regulatory requirements and to tap global markets, we need to relook at this scenario.