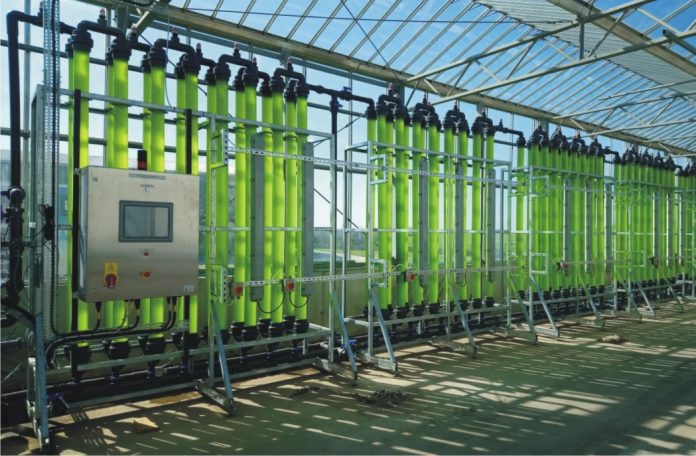 New Swansea University research has revealed microalgae could play a crucial role in successfully reusing food and farm waste on an industrial scale.
Microalgae are microscopic photosynthetic cells found naturally in the oceans and lakes. But in a new article, the University-based ALG-AD research group explains how unwanted nutrients from food waste can be used to grow algae. The algae convert the nutrients into protein which can in turn be fed to farm animals as a replacement to less sustainable soya protein.
A key aim of the ALG-AD project, led by the College of Science, is to investigate this circular economy process which sees nutrients being used to generate another resource of value – creating wealth from waste.
“Implementation of circular approaches in industry, by minimising waste and optimising reuse of resources, is of critical environmental importance,” said Dr Claudio Fuentes-Grünewald, lead author of the paper.
“Microalgal cultures are particularly adept at waste remediation and are also incredibly versatile in how the biomass produced can be processed and applied,” he added.
The article, published in prestigious journal Bioresource Technology, goes into detail about how the researchers have demonstrated a novel way in which microalgae can grow and remediate organic waste.
So far, the ability of microalgae to solve environmental issues has only been demonstrated on a relatively small scale. Microalgae can grow and produce biomass in different ways depending on conditions and ALG-AD has successfully demonstrated a combination of two different growth modes on an industrial scale at its UK pilot facility at Langage AD, Plymouth, England.
The team now aims to process the algal biomass for animal feed and other products of value.
Analysis of this biomass has revealed it is higher in protein than the commercially cultivated equivalent, and the algae also show interesting increases in carotenoids, molecules known for their health-boosting properties.
Currently, microalgal biotechnology is still evolving, but is increasing in global prevalence, with applications in industrial fields ranging from pharmaceuticals and cosmetics to feeds and biostimulants.
Source: swansea