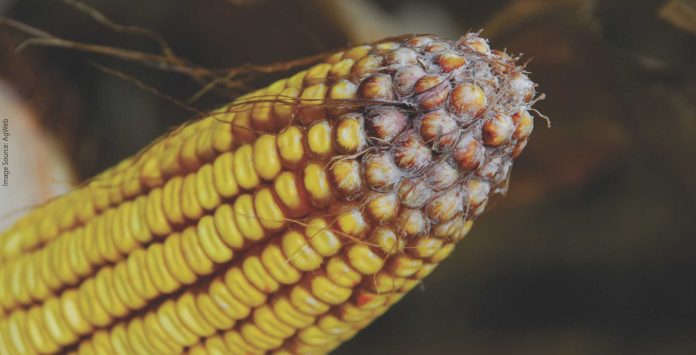 New research by Embrapa and the Federal University of Minas Gerais in Brazil shows mycotoxins in corn can be identified quickly and accurately using near-infrared (NIR) imagery which can replace expensive and complex methods of analysis.

Maize is one of the most versatile crops worldwide with high socioeconomic relevance.
However, mycotoxins produced by pathogenic fungi are of constant concern in maize production, as they pose serious risks to human and animal health. Thus, the search for rapid detection and/or identification methods for mycotoxins and mycotoxin-producing fungi for application in food safety remain important. In this work, we implemented use of near infrared hyperspectral images (HSI-NIR) combined with pattern recognition analysis, partial-least-squares discriminant analysis (PLS-DA) of images, to develop a rapid method for identification of Fusarium verticillioides and F. graminearum. Validation of the HSI-NIR method and subsequent analysis was realized using 15 Fusarium spp. isolates. The method was efficient as a rapid, non-invasive, and non-destructive assessment was achieved with 100% accuracy, sensitivity, and specificity for both fungi.
Mycotoxins cause large losses
Brazil is the third-largest producer (around 109 million tonnes) second only to the US (360.3 million tonnes) and China (260.7 million tonnes).
According to the Food and Agriculture Organization (FAO), annually, mycotoxins affect 25% of the world’s corn production. The financial damage in the US alone can be as high as USD 1.68 billion per year.
Source: NCBI