Deoxynivalenol and fumonisins continue to top list of most prevalent mycotoxins worldwide.
Mycotoxin-related threats to livestock production have remained elevated in most regions of the world. Over 33000 analyses were conducted on 8452 finished feed and raw commodity samples sourced from 63 countries from January to June 2017, covering common components used for feed such as corn, wheat, barley, rice, soybean meal, corn gluten meal, dried distillers grains (DDGS) and silage, among others.
According to BIOMIN, the main trends emerging from the survey include:

Deoxynivalenol (DON) and fumonisins (FUM) continue to top the list of most prevalent mycotoxins worldwide, as they are found in 81% and 71% of samples, respectively.
Countries analyzed throughout the Western Hemisphere all registered as high risk in terms of mycotoxin-related threats to animals.
Most countries in Asia showed an increased risk of mycotoxin contamination in the second quarter, compared to the first quarter of 2017.
Top threats
Overall, deoxynivalenol and fumonisins were detected in 81% and 71% of all samples at average levels of 798 ppb and 1,840 ppb, respectively. Out of all samples, 52% were contaminated by zearalenone. Aflatoxins, T-2 and OTA were present in 26%, 19% and 18%% of samples, respectively (Figure 1).
Co-contamination
A full 94% of all samples contained at least one mycotoxin, and 76% of all samples contained two or more mycotoxins (Figure 2).
Results for corn
The most common mycotoxins found in corn (maize) samples analyzed from January to June 2017 were FUM (90%), followed by DON (84%) and zearalenone (49%).
“Trends in finished feed risk tend to match corn risk over time due to the prominence of corn, or maize, in animal feed,” explained Dr. Timothy Jenkins, mycotoxin risk management product manager at BIOMIN. “The corn risk varies by region, with FUM issues more common in warmer conditions, whereas DON was more common in cooler regions.”
Results for soybeans
DON was the most prevalent mycotoxin found in soybean samples worldwide (79%), followed by zearalenone (73%). T-2 toxin, aflatoxins and FUM were detected in 39%, 38% and 26% of samples, respectively.
“In the last year-and-a-half, we’ve seen a marked increase in the mycotoxin contamination of South American soy and soy byproducts,” Jenkins said.
Multiple mycotoxin presence
Consistent with results noted in the first quarter of 2017, more than three-quarters of samples analyzed contained two or more mycotoxins, which presents additional risks. Certain combinations of mycotoxins are known to have synergistic effects that aggravate the negative consequences for animals. 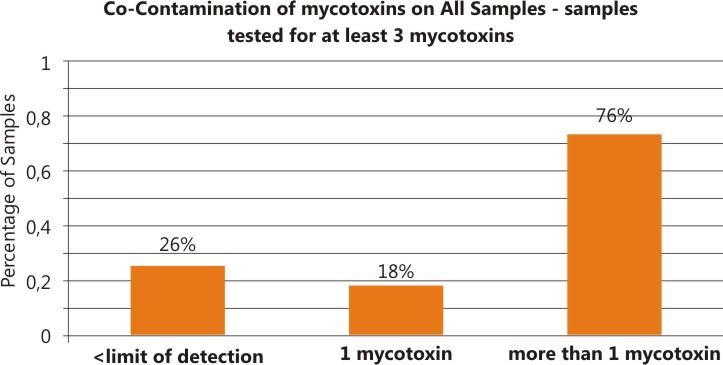 “Subclinical symptoms often related to the main fusarium mycotoxins — DON, zearalenone and FUM — can be difficult to detect but have a greater economic impact for the industry,” Jenkins said. “Poorer feed efficiency and low growth rates are associated with the presence of low-level multiple mycotoxin contamination.”
Jenkins offered some advice on mitigating the risk associated with mycotoxins. “Avoid contaminated feed when possible, and pay attention to feed storage conditions. Given the widespread occurrence of mycotoxins globally, further steps may be warranted,” he suggested.
“Despite the most strenuous efforts to prevent mycotoxins from occurring, mycotoxin contamination of feedstuffs still occurs. Proven, state-of-the-art strategies that adsorb or deactivate toxins in the intestinal tract of animals offer the most reliable, safe and effective solution,” he added.
The annual Biomin Mycotoxin Survey constitutes the longest running and most comprehensive survey of its kind. The survey results provide insights on the incidence of the six major mycotoxins in the agricultural commodities used for livestock feed in order to identify the potential risk posed to livestock animal production.
Source: Biomin

Price Change in Corn and Lysine