Mycotoxin in Forages
Many different mycotoxins have been found to occur on forages either in the field, or in storage as hay or silage (Lacey, 1991). Some mycotoxicoses in cattle resulting from contaminated forages have been reviewed (Lacey, 1991; Gotlieb, 1997; Seglar, 1997). The limiting factor for mold growth in hay is moisture. Therefore, mold is most likelyz in hay stored too wet. The limiting factor for mold growth in silage is pH. However, if silage is stored too dry, or insufficiently packed and covered, infiltration of air allows for microbial activity which depletes silage acids, allowing pH to rise and molds to grow.n = number of samples% = percentage of samples positive above given concentrations x = mean of the positive samples plus, and minus the standard deviation 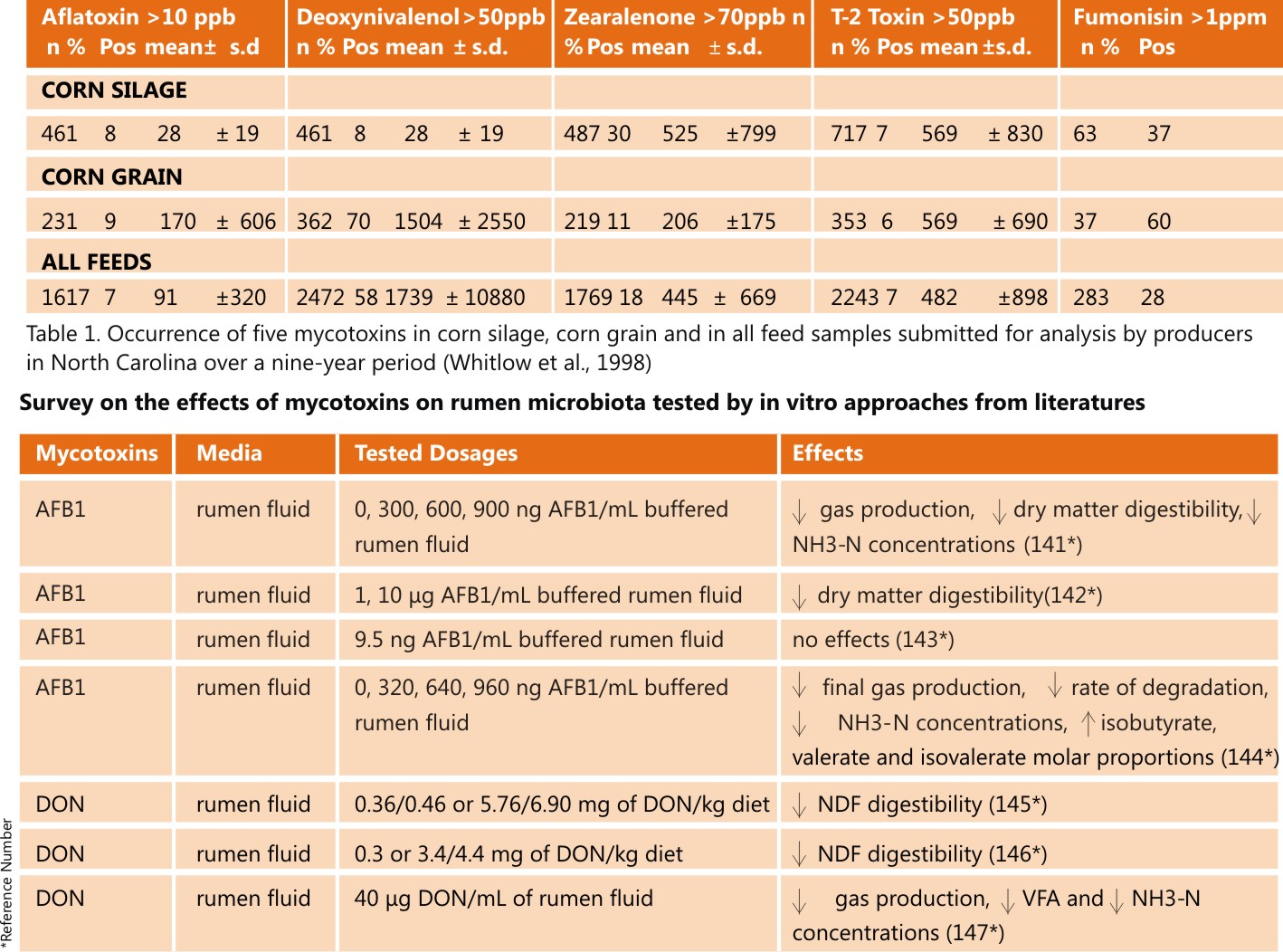 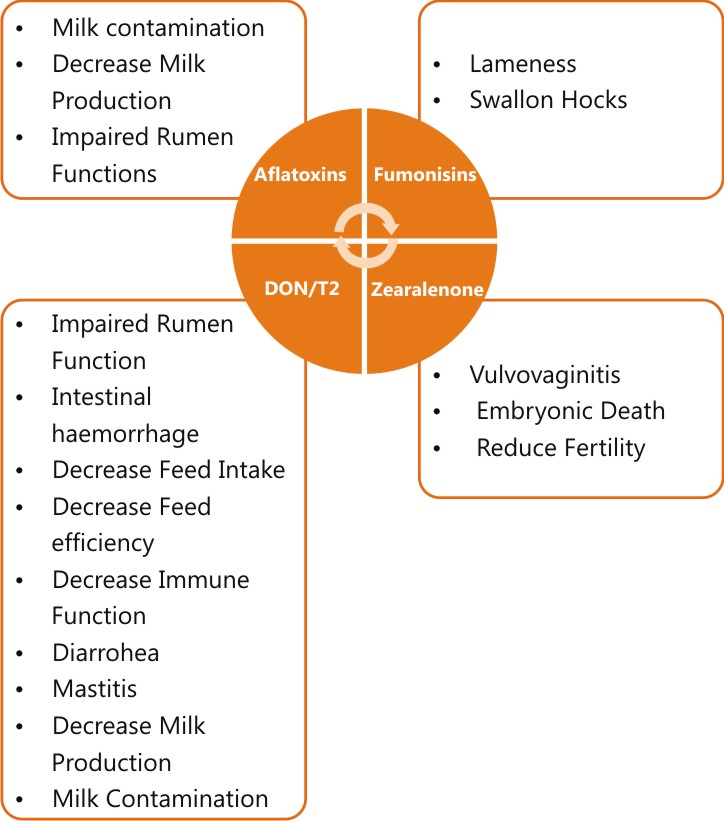 The principal classes of mycotoxins include a metabolite of A. flavus and Aspergillus parasiticus, aflatoxin B1 (AFB1) which is considered to be the most potent hepatocarcinogenic substance and genotoxic. In dairy cattle, another problem arises from the transformation of AFB1 and AFB2 into hydroxylated metabolites, aflatoxin M1 and M2 (AFM1 and AFM2), which are found in milk and milk products obtained from livestock that have ingested contaminated feed. In 1993, the WHO-International Agency for Research on Cancer evaluated the carcinogenic potential of Aflatoxins and other potent mycotoxins. Ochratoxin A (OTA) which is a secondary metabolite produced by several species of Aspergillus and Penicillium is nephrotoxic and nephrocarcinogenic compound.
Effect on Cattle
Aflatoxins have been shown to negatively affect production, immune system function, and rumen metabolism in cattle. There is decrease in digestibility of animal depending on the dose of aflatoxins present in the moldy feed. The immunosuppressant effect predisposes the animal to be infected by pathological organisms which can lead to mastitis, metritis etc.
Factors influencing toxicity of Mycotoxins:
1. Species and breed of animal
2. Concentration of mycotoxins and duration of the contamination period.
3. Animal’s nutrition and health
4. Age of the animal
5. Inadequate conditions of animal’s habitat: temperature, humidity, ventilation and handling.
6. Presence of other mycotoxins and synergism with them.
7. Draught conditions and insect infestation. 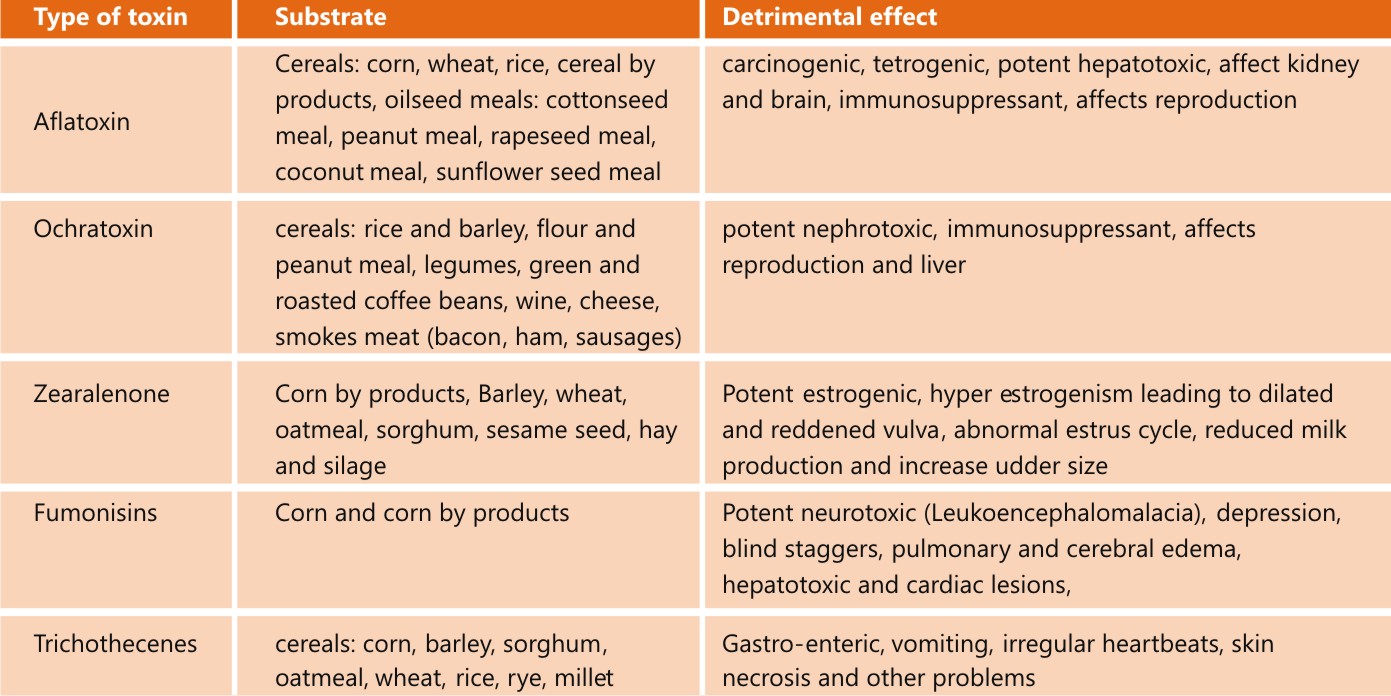 Mycotoxins in combination appear to exert greater negative impact on the health and productivity of livestock in comparison to their individual effect. The impact of reduced animal productivity, increased incidence of disease due to immune suppression, damage to vital organs and interference with reproductive capacity is many times greater than the impact caused by death due to mycotoxins poisoning.
Mycotoxicosis- A Threat to Human Life
AFM1 (4-hydroxy aflatoxin B1) is a hydroxylated metabolite of B1. It can be found in milk and milk products coming from dairy cattle that have consumed feed contaminated with AFB1 after 6-24hrs of consumption. The European legislation states the maximum level of aflatoxins in milk to be 0.05ppb whereas according to the US legislation it is 0.5ppb to be the maximum permissible level of M1 in milk. Humans can be infected by mycotoxins directly or indirectly. Direct consumption of cereals, cereal by products, dry fruits contaminated with toxin producing molds or indirectly through consumption of animal products like eggs, meat and milk leads to detrimental effects on human life. Young generation is more susceptible because they do not have enough biochemical mechanism for detoxification. The main aflatoxicosis in humans are hepatotoxicity, liver carcinoma and Reye’s Syndrome. Reye’s Syndrome which is characterized by anatomicopathological association of an acute cerebral edema with a fatty degeneration in children was attributed to the consumption of food contaminated with AFB1.
Alleviation of Mycotoxins
1. Eliminate other possible causes as soon as possible with the help of experienced nutritionists, veterinarians and other trained consultants.
2. Properly adjust energy contents of any moldy feeds or lightweight grains in the ration.
3. Include Toxin Binders in the feed. Toxin binder bind mycotoxins in the digestive tract and reduce their absorption
Ideal Properties of Toxin Binder:
Stable at variable pH
Broad spectrum and should bind Multitoxins.
Should have no Masking effect.
No residue effects.
It should not have any interference with the nutrients.
4. Use a suitable mold inhibitor in dry feeds that contain 14% or more moisture. Mold inhibitors are effective tools to reduce mold growth but should be not be relied on as the exclusive method of mold control. Mold inhibitors must be completely and thoroughly distributed throughout the feed, or for silage properly distributed on the area where mold is to be inhibited.
5. Test the ration or most of its components for mycotoxins. Consider testing to help eliminate other possible causes of the adverse effects.
6. Discontinue or severely restrict use of obviously moldy feed or suspected non-moldy feed pending test reports
7. Discontinuing the use of a silage, haylage, or high-moisture ensiled grain and resealing the silo for several weeks may stop further formation of mold or mycotoxins. Thus, the feed may be used later to some extent after discarding the next 6 to 10 inches of material and any obviously moldy or spoiled feed.
8. Animal Management
Observe symptoms and then consider and eliminate other possible causes for those problems.
Analyze feeds for the more common mycotoxins such as DON, ZEN, T-2 toxin and fumonisin. If unacceptable mycotoxin levels occur, removal of the contaminated feed is best but not always possible.
If a mycotoxicosis is suspected, add mycotoxin binders to the diet and observe the herd for responses. Reduce stress including environmental and nutritional stresses.
Manage the feeding program to maximize feed intake.
Use buffers to maintain normal rumen pH and to avoid acidosis.
Raise protein and energy while maintaining adequate dietary fiber.
Increase antioxidant nutrients such as vitamin E and selenium.
Dry cows and springing heifers should consume no moldy, mycotoxin-contaminated feed.
Use proper dry cow and transition rations. Make judicious use of mold inhibitors.
by Dr. Dimple Puri & Dr. Sudhir Singh, Kemin Industries South Asia