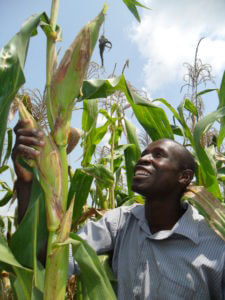 For nearly 20 years, Kenya has attempted to adopt the better-yielding and disease- and drought-tolerant crop varieties bred through genetic engineering. But like the rest of the continent — aside from South Africa and Sudan, which are already growing insect-resistant Bt maize and cotton — it made little tangible headway in getting these improved crops to its farmers.
But Kenya, East Africa’s biggest economy, has recently adopted a liberal outlook towards biotechnology. This increases the odds it will soon move to officially commercialize GM crops — an action that could prompt neighbouring nations to quickly follow suit.
The surge in support for biotech in Kenya is partly the making of President Uhuru Kenyatta, who particularly views release and commercial production of Bt cotton as essential for revival of the country’s textile industry, which peaked more than 40 years ago.
“President Kenyatta is prioritizing food security, affordable housing, universal healthcare and manufacturing,” Oduorsaid Dr. Richard Oduor of Department of Biochemistry at Kenyatta University. “He sees agricultural biotech, and specifically growing Bt cotton, as one channel which can boost delivery of his ‘Big Four’ agenda.”
In fact, cotton farmers in the western province of the country are already demanding the Bt variety, which can resist the bollworm larvae that attacks the cash crop.But Bt cotton won’t be released until 2020, he said.
Once Kenya starts growing its first Bt variety, Odour believes it will be only a matter of months before the other East African Community (EAC) countries of Uganda, Tanzania, Rwanda, Burundi and South Sudan follow suit.
For decades, Kenyan farmers planted conventional cotton, but the variety has since become susceptible to attacks from pests and the bollworm larvae, which is devastating the cash crop across Africa.
A local farmer said pest control to thwart bollworm accounted for close to 30 percent of total cotton production costs. Yet despite the investment, farmers still lost most of their cotton to the worm.
Kenya adopted a national biotechnology development policy to guide the creation and use of genetically modified organisms in 2006. The Kenya Biosafety Act 2009 includes clauses on labelling GMOs, distances that must be maintained between GM and conventional crops during cultivation, and import and export of the varieties.
“It is our scientists who are developing improved seeds. Scientists are part of national programs. So how are the multinational seed makers suddenly going to monopolize everything?” he asked. “Our scientists and governments are developing these better varieties for our people — the smallholder farmers.”
Aside from Bt cotton, scientists in Kenya are conducting trials on various crops, including drought-tolerant maize, insect-resistant maize, virus-resistant cassava, virus-resistant sweet potato and biofortifi¬ed sorghum. Some trials are still confined to greenhouses, but other crops have completed that step in the deregulation process and are now being tested in open field trials
Researchers who are breeding GM cassava said they intend to apply for commercial approval of the varieties this year, with an aim of making them available to farmers by early 2021.
Whereas Nigeria is likely to emerge as the continent’s next leader in GM crops.Nigeria commercialized Bt cotton, its first GM crop, in July 2018 and is now working to get seeds into the hands of its farmers. This year, the West African nation approved its first GM food crop, the pest-resistant cowpea. The decision to allow the environmental release of Bt cowpea affirms the crop’s safety and at the same time paves the way for commercializing the variety and making the seeds available to farmers.
With a population of over 190 million people, Nigeria is known as the giant of Africa and many African countries are looking to it to lead the way. Experts have postulated that Nigeria’s success with GM crops could open up the entire African continent to adopting agricultural biotechnology.
Source: geneticliteracyproject.org