Introduction
Aquaculture has been accelerating for decades, although outbreaks of a wide variety of infectious diseases have resulted in devastating economic losses in the country. In aquaculture industries, the main focus has been on the use of different types of antibiotics. This is due to the negative effectsof antibiotics on the environment, followed by the development of mutagenic microbial strains that adversely affected fish health. 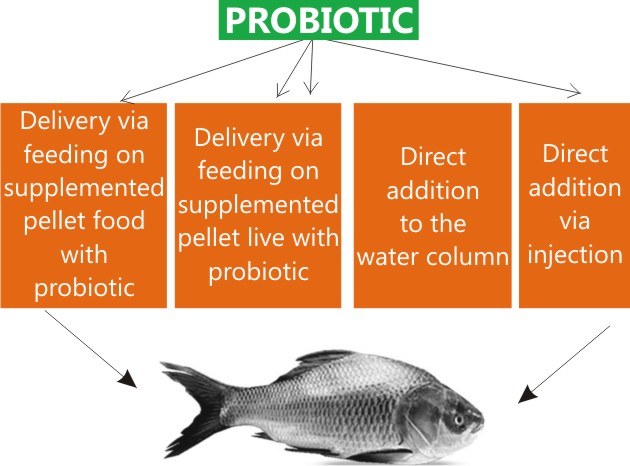 Therefore, the application of eco-friendly feed additives, such as microbial supplements, to improve the physiology, growth performance, antioxidant status and immune responses of aquaculture-related speciesbecomes a priority. The use of probiotics is one of the alternative approaches to immunoprophylactic control in aquaculture (Magnadottir et al., 2010), andis considered a supplementary strategy or alternative to theuse of vaccines and chemicals (Pérez-Sánchez et al., 2013). According to Fuller, probiotics are “live microbial food supplement that benefits the host(human or animal) by improving the microbial balance ofthe body” and that it would be effective in a rangeof extreme temperatures and salinity variations.
Administration of probiotics in aquaculture system
Probiotics can be administered in fish as dietary supplements (via live food or pelletfood) or added to the water directly (Moriarty, 1998). LaPatra et al(2014) also reported that probiotic delivery via injection in water in aquaculture industries. The use of a suitable administration method contributes to the favourable performance ofprobiotics.
Applications of probiotics in aquaculture:
Growth
The effects of probiotics on the growth performance in aquatic fish and other beneficial activities have well been documented in many studies. Mohapatra et al (2012) conducted a trial to see the effects of different microbial probiotics in the diet of Rohu fingerling (Labeorohita) on growth, nutrient digestibility, digestive enzymes and intestinal microbiota. They reported that the fish fed a combination of three probiotics (Bacillus subtilis, Lactococcus lactis and Saccharomycescerevisiae) showed a higher growth, protein efficiency ratio, nutrient digestibility and lower feed conversion ratio compared to the other groups. Lara-Flores et al (2003) reported that all the probiotic-containing groups resulted in growth higher than that of the control group for tilapia (Oreochromis niloticusL.).
Feed conversion ratio (FCR)
The supplementation of probiotics could improve feed utilization even under stress conditions. The best FCR values were observed when probiotic-containing diets were fed to Nile tilapia (Oreochromis niloticusL.). Abdel-Tawwab et al (2009) reported that the use of Spirulina as a probiotic in Nile tilapia diet improved FCR compared to the control fish. 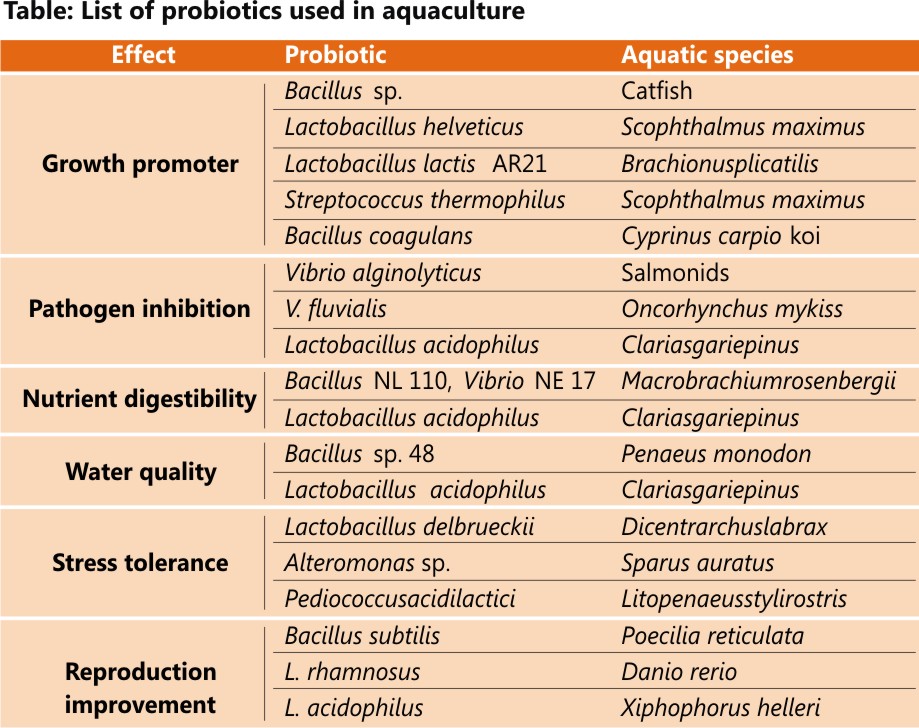 Protein efficiency ratio (PER)
Some research reported that probiotics fortified diets could significantly improve the protein efficiency ratio (PER) or apparent nitrogen utilization (ANU). This results in optimizing protein use, which is the most expensive feed nutrient for growth of the fish. In addition, the supplementation of probiotics causes a higher feed nutrient efficiency in stress conditions.
Digestibility
The addition of probiotics will improve the diet and protein digestibility, which may in turn explain the better performance in aquatic species. The beneficial effects of probiotics in fish diets on feednutrients digestion were reported attributable to the digestive enzyme activity of bacteria. Askarian et al (2012) observed that the effect of chitin on the adherent aerobic intestinal microbiota of Atlantic salmon (Salmo salarL.) and further tested for protease, amylase, cellulose, phytase and chitinase activities particularly for Lactic acid bacteria (LAB). They reported that the LABs have the ability to produce digestive enzymes such as amylase, lipase and protease.
Immune system response
Some ofthe feed additives have been investigated for their potential to protect fish from stressors or diseases. The probiotics canstimulate specific and non-specific immune systems in aquatic species.Monospecies or multispecies probiotics can promote the phagocytic and lysozyme activities and also expression of various cytokines level in fish. In addition, probiotic bacteria can stimulate the activity of gut immune system of fish and increase immunoglobulin cells and acidophilic granulocytes.
Conclusions
Probiotics have a number of beneficial effects in aquaculture sector. According to different studies, provision of probiotics improves feed intake, feed conversation ratio, protein efficiency ratio,stimulates growth rate and immune responses in aquatic species.
References are available upon request.
by Lamella Ojha, Hunny Sharma, Manpreet Singh and Shimala Yadav
National Dairy Research Institute, Karnal