International feed production has increased by a strong 3% to a record 1.103 billion tonnes in 2018, as estimated by 2019 Alltech Global Feed Survey. Theeight survey draws upon data from 144 countries and nearly 30,000 feed mills.
The feed industry has seen 14.6% growth over the past five years, equating to an average of 2.76% per annum. As the population grows, so does the middle class, which is well reflected in an increase in overall protein consumption.
Region-wise report
The Asia-Pacific region is home to several of the top-10 feed-producing countries, including China, India and Japan. China maintains its hold as the global leader in feed production, with a lead of about 10 million metric tons over the United States. Increased production for Asia-Pacific came from India with 13% due to growth in dairy, layer and broiler feeds. Other countries that demonstrated higher growth variance included Pakistan, Myanmar and Laos
The Middle East is still the smallest region of production, but it did see feed production increase by 2 percent in 2018. The region remained flat in many species, but the primary contributor to the increased feed production was in the broiler species, which saw an increase of 5 percent regionally. Most of this increase was in Iran followed by Saudi Arabia.
Europe saw an overall growth of about 4 percent over 2017, making it the second-fastest-growing region in the survey. Most of the primary protein areas saw growth; layer and broiler feed production were up 7 percent and 5 percent, respectively, while the feed production of pig, dairy and aquaculture were up 3, 4 and 5 percent, respectively. Beef was the only primary protein species in which there was a decline, though it was less than 1 percent.
A strong growth of 5 percent has been observed in Africa. In fact, no country within the region saw a decline in overall feed production. Morocco, in particular, stands out as a country that is demonstrating growth across nearly every species. The areas that did show decline were not necessarily animal protein production-related, such as equine (-4 percent) and pets (-14 percent) and as it represent a very small proportion of Africa’s overall production, so their impact is minimal. Most of the major animal production species, such as ruminant and poultry contributed to overall growth for the region.
The only region that didn’t show much growth in overall feed production was Latin America. Brazil, Mexico and Argentina continue to produce the majority of feed in Latin America, for a combined total of 76 percent. Brazil remained steady in feed production, while Mexico and Argentina saw growth of 1 percent and 4 percent, respectively. Colombia’s feed production grew by about 8 percent, primarily due to an increase in pork and egg production. Several countries saw a decline in feed production, such as Venezuela (-27 percent), El Salvador (-16 percent) and Chile (-8 percent).
North America saw a steady growth of about 2 percent over last year. This is due to a small but consistent increase in nearly every major species in the U.S. and Canada. There were no major decreases in feed production in any specific area, and overall, each species either grew or remained flat. Feed costs in this region are the lowest globally across all species, and with the availability of land, water and other resources, the region is expected to remain a primary contributor of feed production.
Species-wise report
Globally, broiler production increased by about 3 percent in 2018. There was growth in all regions, with the exception of Latin America, in which a very small decline was observed. All other regions were up, though — particularly Africa, at 9 percent. An overall trend observed in broiler sector is that as populations grow and become wealthier, interest in protein — particularly in palatable chicken — does as well.
Major growth areas for layer feed included Europe, Latin America and Asia-Pacific. In Europe, Poland and Uzbekistan each saw a growth of around 200,000 metric tons. Latin America’s growth was biggest in Colombia, Peru, Brazil and Mexico. In the Asia-Pacific region, South Korea, India and Indonesia all saw growth of several hundred metric tons. North America saw an overall growth of 2 percent, in which both the U.S. and Canada saw increases in production. Africa saw small decrease in layer production, which was in large part due to declines in both Egypt and Seychelles. 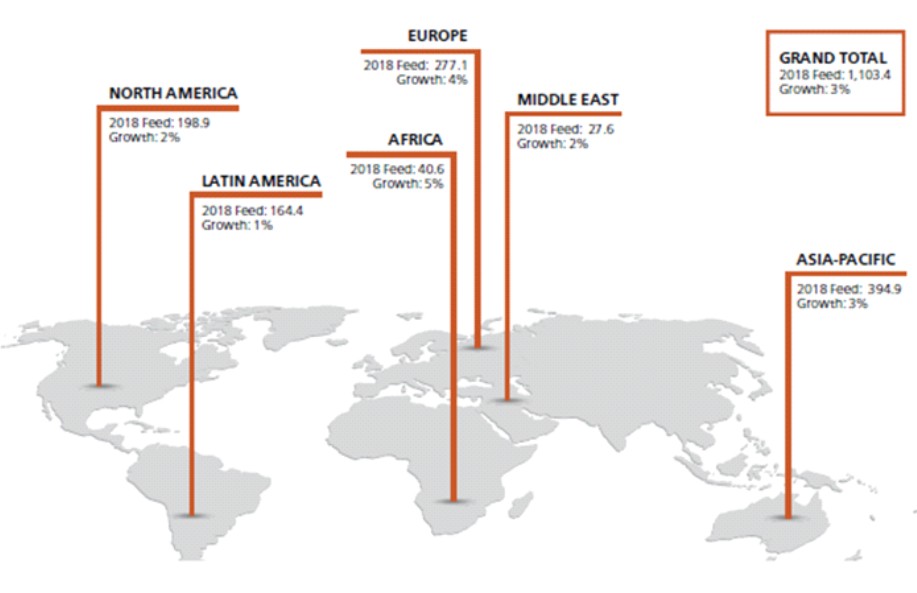 The dairy feed industry saw asteady growth in North America and even more in Africa and Europe,but Latin America and the Middle Eastremained relatively flat. Africa’s growth was primarily due to a significant increase in both Morocco and Nigeria. Europe’s shining star this year was Turkey, which saw an increase of 10 percent in dairy production; other contributors in the region include Ireland, Russia and the U.K.
North America has led beef feed production with an increase of 3 percent. Europe saw a small decline at barely 1 percent. In the past, Europe has been followed by the Asia-Pacific region, but many of the countries in that region saw declines in beef feed production, including Bangladesh, Mongolia, Indonesia, Taiwan, Vietnam and Pakistan. China and Australia both saw growth — but not enough to offset the overall decline in the region. Latin America saw strong growth of about 8 percent, and Mexico and Argentina primarily contributed to this. As a result, the Latin American region now takes third place in beef feed production. 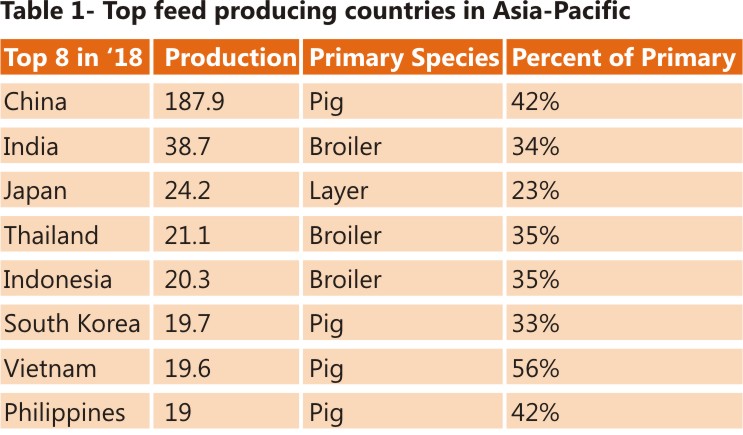 Aquaculture feed saw a healthy growth of 4 percent over last year’s feed total. This was primarily attributed to strong increases in the Asia-Pacific and European regions. Vietnam, India and Indonesia brought a combined additional 1.58 million metric tons of feed to the region. The region’s leader, China, also saw an increase of 1 percent over last year. The primary European leaders either experienced strong growth or remained relatively flat. Those that did grow included Norway and Turkey, both at 7 percent, as well as Spain at a substantial 31 percent. The other four regions remained relatively flat or saw only a 1 percent increase or decrease in feed production, demonstrating the continuity of the industry as a whole.
The pet industry saw a growth of about 1 percent in 2018. This is primarily attributed to an increase in the Asia-Pacific region, which was offset by a decrease in the Latin American and African regions. North America and the Middle East both remained relatively flat. Previously, Europe had been in the lead for pet food production, but after a reassessment of 2017 numbers and despite a growth of 2 percent, it still ranks just behind North America. The primary countries with growth were Portugal and Turkey, which saw a combined 50,000-metric-ton increase in feed production. Europe is estimated in 2018 to have produced 8.6 million metric tons in total — only about 200,000 behind North America.
Source: Alltech