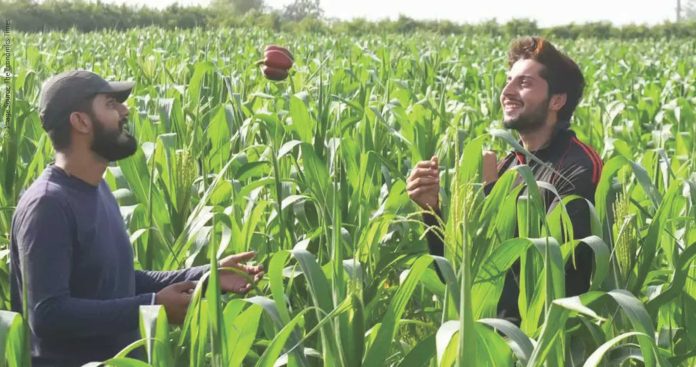 The Centre, States and other institutions must join hands to foster an entrepreneurial ecosystem in the fodder sector
The recent crisis of dry fodder has attracted considerable national attention over the last few months. Reportedly, the two major reasons are: (1) farmers opted for mustard crop in place of wheat in northern Indian plains and (2) early onset of summer coupled with an exceptional rise in temperatures that caused significant loss to the tune of 4-8 quintals per acre in wheat yield. Wheat straw is widely used as animal fodder.
The prices of dry fodder are skyrocketing and, ‘gaushalas’ and dairy owners are finding it hard to arrange fodder for their farm animals. A ban by the authorities on inter-district transport of dry fodder and its sales to brick-kiln and cardboard factories has worsened the fodder shortages. Experts opined that the situation is likely to worsen in future in the absence of rains.
Feed and fodder scarcity issues in India and their detrimental impact on the productivity potential of our livestock are well documented. Livestock production systems in India are mostly based on traditional knowledge, low-cost inputs drawn from crop residues and agro-by products leading to lower productivity. In addition to this, inconsistency of fodder supply during summer or drought creates a gap in the supply chain.
The recently reported deficit in green fodder is 11.24 per cent while the country is experiencing a 23.4 percent shortage in dry fodder and around 29 percent in concentrates. The increasing livestock population and government focus on genetic advancement of cattle by cross-breeding programmes will definitely lead to a crisis if appropriate measures are not put in place to bridge the demand-supply gap.
Entrepreneurship in fodder
Nonetheless, fodder-based research organisations have come up with various technologies and advisories in the past few years, the ground-level adoption and impact of these interventions are very limited across the country. The sector needs more youth innovators, to come forward and offer low-cost, innovative quality feeding solutions to the dairy farmers.
The Covid-19 induced colossal reverse migration of informal workers from cities to the real ‘Bharat’ has sharply highlighted the disproportionate concentration of economic opportunities in the country’s urban areas. The potential of this labour force can be harnessed by providing them with formal training and efficient resources and by creating an entrepreneurial ecosystem in the villages themselves.
Mentoring and capacity building of the potential entrepreneurs will be crucial for inculcating confidence in them to start such ventures. The expertise of the Jhansi-based ICAR-Indian Grassland and Fodder Research Institute will be crucial in preparing a pan India group of feed and fodder entrepreneurs. The institute has a dedicated “Agri Business Incubation Centre (ABIC)” to nurture agripreneurs in the fodder sector.
The centre envisages facilitating the incubation of new start-ups for innovative technologies by providing need-based physical, technical, and networking support, and facilities to validate the ventures before their successful establishment as enterprises.
Production of certified fodder seeds, fodder blocks and azolla, silage and hay preparation, feed pelleting, and hydroponic fodder production are some of the potential areas which can be promoted as entrepreneurial activities.
Role of government
The vision of becoming “atmanirbhar” in feed and fodder will not be materialised without the proactive role of both the Central and State governments in supporting fodder-based start-ups. The government should give a buy-back guarantee with prior agreement for the procurement of certified fodder seed and surplus fodder from the entrepreneurs.
Infrastructure facilities like silage and hay balers, fodder block making units, chaff cutters, crop harvesters, pivot irrigation equipment etc. along with all the facilities required should be supported. The construction of more fodder banks at the block level of all fodder-stressed districts must be a policy focus.
The government must support fodder cultivation as a bankable project for those entrepreneurs who wish to take up fodder cultivation as an economic activity to obtain bank loans. Awareness needs to be generated among farmer-entrepreneurs for making value additions to the fodder to use it as a nutritious food for animals and thereby saving a large amount of fodder that goes waste every year.
Moreover, the investment must be tailored to developing insurance mechanisms for mitigating the financial risks faced by fodder-based start-ups.
Lastly, the government must recognise entrepreneurs as well as the institutions and organisations concerned which have done commendable work in the field of fodder development by way of merit certificates and cash incentives.
Source: The Hindu Business Line