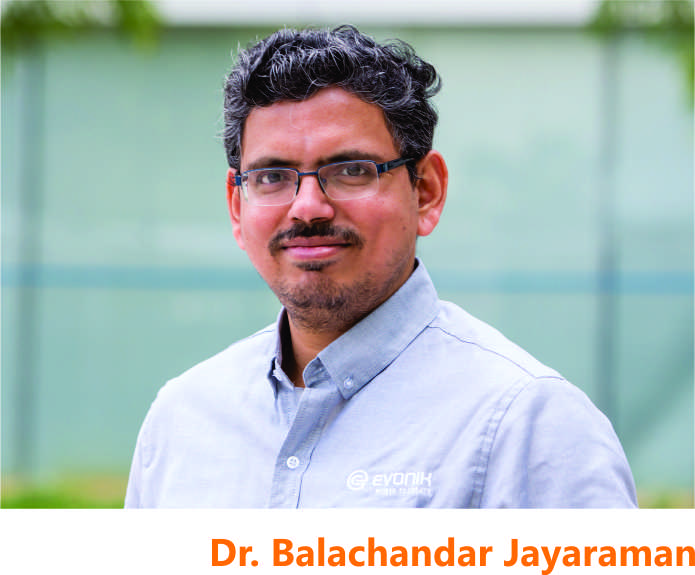 Creatine (Cr) is an important component of animal tissue. Cr and its phosphorylated form, Phosphocreatine (PCr) play a dynamic role in cellular energy metabolism of animals. The Cr / PCr system functions as a backup to adenosine triphosphate (ATP) / adenosine di – phosphate (ADP) system in order to store and mobilize energy when required on an immediate need, particularly in muscle cells. Readily available PCr and ATP molecules improve the efficiency of various biological processes in cells that require energy in the form of ATP.
Endogenous synthesis of Creatine
The metabolism of Cr involves a series of enzymatic reaction as illustrated in Figure 1. Cr is 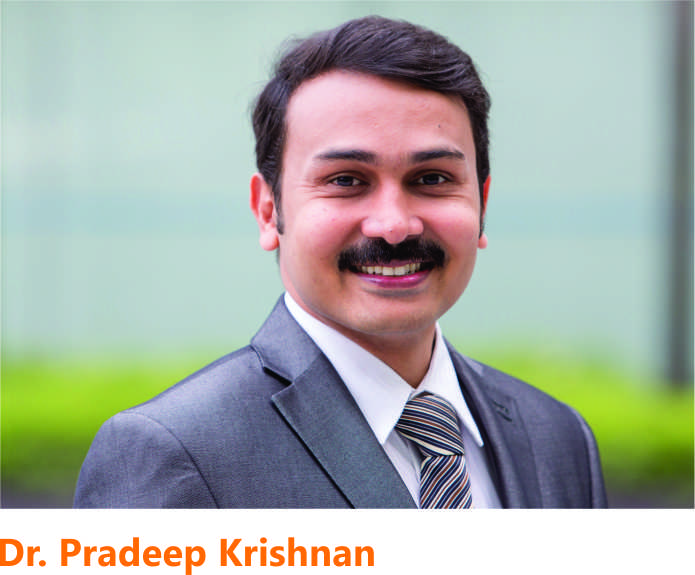 synthesized in the liver from guanidino acetic acid (GAA) formed mainly in the kidney from glycine and arginine. GAA is transported via bloodstream to the liver, where most of GAA is methylated to Cr (Mousavi et al., 2013). Cr synthesized in liver is largely transported to muscle cells. Once Cr enters the muscle cell, it is phosphorylated to PCr by Creatine kinase (CK) through a reversible metabolic pathway. Part of this Cr pool (1.6–1.8 % per day) is irreversibly lost and excreted as creatinine (Lemme et al. , 2007) . This rapid turnover of Cr indicates the need to steadily replenish Cr pool either by de – novo synthesis or by dietary intake especially in fast growing broilers.
Fast growing broilers have a requirement for Creatine
It is estimated that about two third of daily Cr requirement would be met by de novo synthesis while the other one third must be provided by dietary supplementation. Cr is only present in feed ingredients of animal origin like fish meal (-1100 800 mg/kg), meat and bone meal and poultry by product meal (PBP) (-200 1 107 mg / Kg) while plant – based ingredients are devoid of Cr (Khajali et al., 2020). However, contribution from animal by 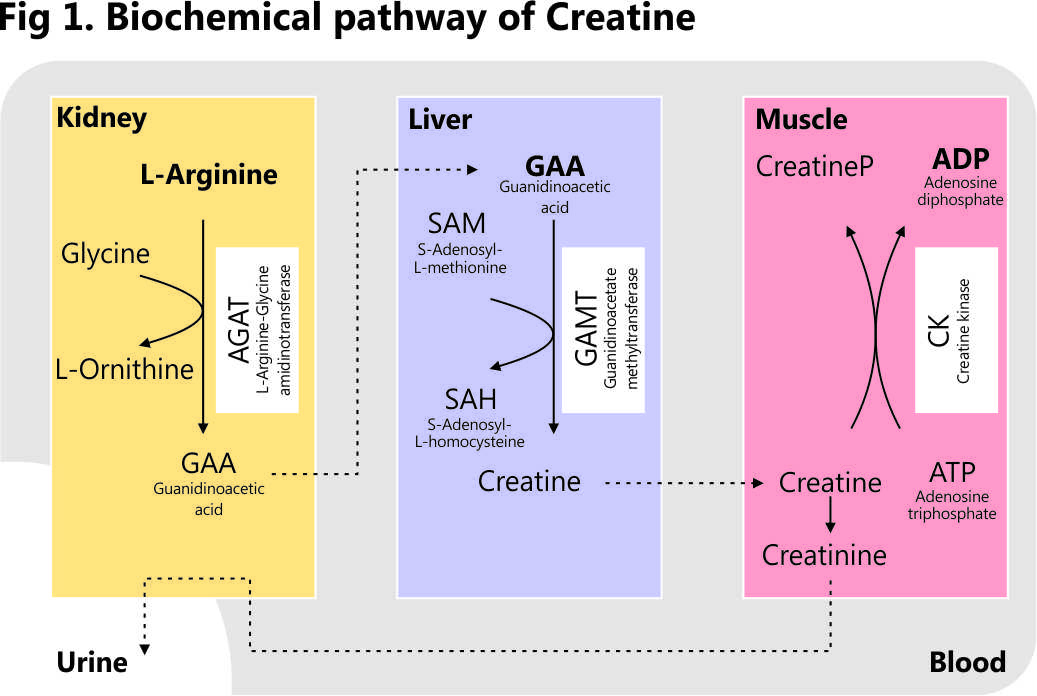 products to dietary Cr would be rather marginal explaining why there is a need for supplemental Cr in fast growing broilers. Inclusion level of 5 % fishmeal in the diet would contribute <10 mg Cr/ day at 150 g daily feed intake (50 kg fish meal per Mt*1.11 g Cr/kg fishmeal*150 g feed intake). The daily Cr requirement of a 1 Kg and 2 Kg broiler is estimated to be 210 mg and 295 mg respectively, of which approximately 140 mg and 195 mg can be endogenously synthesized (66 %). This creates a gap of 70 – 100 mg in daily Cr requirement for the birds weighing 1 and 2 Kg respectively.
Creatine is a conditionally essential nutrient for broilers
Based on the above facts, Cr can be defined as a conditionally essential nutrient. In contrast to humans where Cr accretion happens over a long period of time, feeding studies in broilers demonstrated that dietary supplementation of GAA reflected in a spike in the metabolic pool of Cr in muscle tissue within weeks (CCL Research Netherlands, 2007). Studies on digestibility and utilization of metabolic intermediates clearly provide evidence that bird’s metabolism determines the supplemental sources of Cr like other nutrient sources with digestibility co – efficient of 99% and utilization efficiency of 76.2 % (Tossenberger et al., 2016). GAA is the natural precursor of Cr. From an application perspective, it turned out that Cr monohydrate is not stable in feed processing while GAA has been shown to be thermally stable (Baker, 2009). From an economic perspective, supplementation of Cr in the form of GAA is more cost efficient compared to Cr monohydrate. 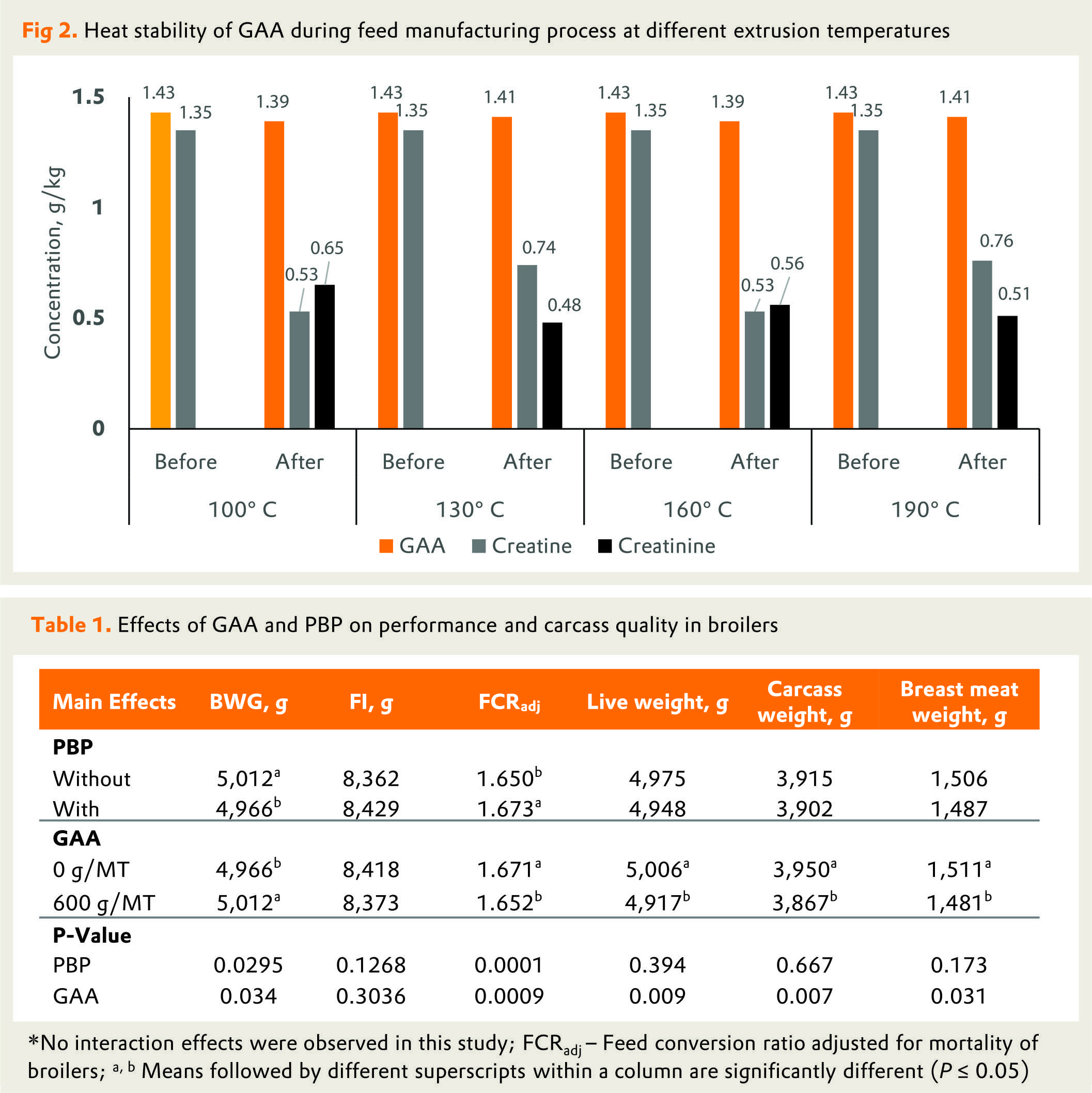 GAA is heat stable during feed production process
Heat stability is an essential criterion for any feed additive used in commercial broiler feed production conditions. In recent review article on GAA applications, the heat stability of GAA over Cr is well discussed (Khajali et al., 2020). At 0.15 % GAA supplementation under simulated extrusion process (130°C), GAA recovery was close to 100% , whereas Cr monohydrate recovery differed widely (Fig 2). Thus, it clearly elucidates the guaranteed heat stability of GAA as it is processed into compound broiler feeds.
Previous GAA trials showed consistent improvement in broiler performance
Previous studies conducted in broilers on GAA supplementation under normal and heat stressed conditions covering all modern broiler strains showed consistent improvement in growth performance. Very often, feed conversion ratio (FCR) was improved by 5 points, body weight gain by 50 g with an added breast meat yield of 15 g.
Recent GAA study in broilers
In Asia South, it is customary to include animal by-products (ABPs) in broiler diets as a source of dietary crude protein, calcium and phosphorus. Growth performance is highly inconstant in broilers fed ABP due to inherent variation in nutrient composition and product quality of ABPs. Inclusion level of 5 % PBP in broiler diet would contribute <2 mg Cr/ day at 150 g daily feed intake. This is far below the exogenous Cr requirement of 70 – 100 mg on a daily-basis. Thus, a study was conducted to evaluate the effects of GAA supplementation in broilers fed corn-soy based diets with and without poultry by-products (PBP) on performance and carcass quality. Dietary treatments consisted of the inclusion of PBP in the diets at 0 % and 5%, and either without GAA or on top supplementation of GAA at 600 g / ton.
A total of 1280 male Ross 708 chicks were placed in 64 floor pens with 20 birds / pen. Response criteria measured include performance [(body weight gain (BWG), feed intake and feed conversion ratio (FCR)] and carcass characteristics (Carcass yield and breast meat yield were measured on day 56). Data were analyzed as a randomized complete block design in a 2 x 2 factorial arrangement with PBP inclusion and GAA supplementation as main effects.
Results
I. Growth performance
Broilers that were fed diets without PBP had improved (P < 0.05) BWG and FCR compared to those fed diets with PBP (Table 1). GAA supplemented birds had better (P < 0.05) FCRadj compared to those without GAA supplementation.
II. Carcass characteristics
GAA supplemented diets had higher (P < 0.05) carcass weight (3,950 g) compared to those (3,867 g) fed without GAA (Table 1). Birds fed diets with PBP was not different (P > 0.05) from that fed without PBP.
Take home messages
GAA serves as the direct precursor for Cr synthesis which is important for energy metabolism in muscles. Cr PO4, the muscle creatine is a major source of energy for skeletal muscle fiber. Daily creatine need for broilers can be partly met by de novo synthesis; however, remaining Cr must be supplied via the feed. There is a supply-demand gap of Cr in muscle tissue and application of GAA has demonstrated to bridge this gap. GAA as a novel feed additive improved growth performance and carcass quality in broilers at inclusion levels of 600 g / MT of feed.

DIETARY ACTIVATED CLAYS: AN APPROACH TO REDUCE THE IMPACT OF AFLATOXIN