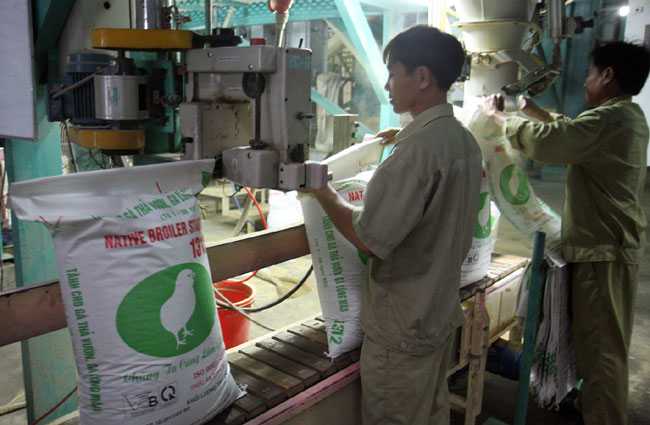 Cargill (from the US) has opened a feed mill in Binh Duong province, raising its total number of feed mills in Vietnam to 12.
Prior to that, CJ Vina Agri (South Korea) put its sixth feed mill into operation and plans to open the seventh mill in Mekong Delta soon. Meanwhile, Mavin (Australia) opened a new factory last May, its fifth factory in Vietnam. The other producers including De Heus (the Netherlands) and Haid (Singapore) have also inaugurated new factories.
Other FIEs such as CP (Thailand), Neovia (France), EmivestFeedmill (Malaysia) and JapfaComfeed (Japan) has not set up new mills, but they are big manufacturers.
CP Vietnam (CPV), for example, has 10 mills throughout the country with the total capacity of 4.2 million tons, or 20 percent of total output in Vietnam, according to MARD. FIEs, though having 61 mills only, make up 60-65 percent of total output. Vietnamese enterprises, including GreenFeed, Anova Feed, Masa, Hoa Phat and Vingroup, though having made heavy investment in the field, remain inferior to FIEs, holding 23 percent of market share only. However, the upper hand of FIEs cannot discourage Vietnamese enterprises. Le Thanh Phuong, director of EmivestFeedmill Vietnam, said that the companies all have plans to expand the production.Vietnam’s livestock industry needs 16-18 million tons of animal feed products each year, worth $6 billion. Grand View Research estimated that the animal feed market may be valued at $10.55 billion by 2020 and 25-26 million tons of products would be needed by that time. In the first seven months of the year, Vietnam spent $2.2 billion to import animal feed and materials to make feed. USDA Post predicted that Vietnam would still need to import 76 percent of raw materials for domestic feed production in 2019.
Vietnamese enterprises still believe they can obtain a share in the domestic market. Hoa Phat, for example, seeks 10 percent of market share in the next 10 years.
Source: Vietnam Net