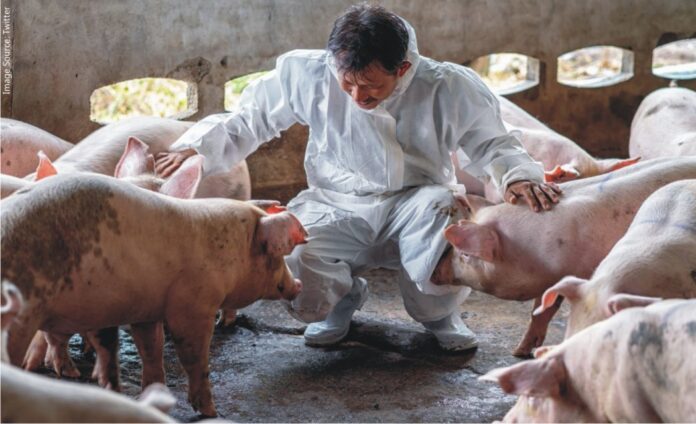 Last year, the African swine fever killed many pigs in Assam, subsequently the import of the animal was prohibited in Manipur.
The contagious African Swine Fever (ASF) has been reported in Manipur, said officials, assuring that the situation is under control. Director of state veterinary and Animal husbandry Dr Chaoba Singh said that the disease has been detected in the Salungpham area in Thoubal district and NongmaichingChingkhong (Wakha) area in Imphal East district.
“So, the said areas have been sealed and sanitised. One km radius of the area has also been contained to prevent further spread of the disease,” Dr Chaoba said. “The surveillance is going on within 10 km radius of the areas too.”
Singh suspected the illegal import of pigs as the reason behind the disease. Last year, the ASF killed many pigs in Assam, subsequently the import of the animal was prohibited in Manipur.
Meanwhile the district administration of Thoubal in its order issued on January 2, under the Prevention and Control of Infectious Contagious Diseases in Animals Act 2009, notified “controlled areas” for ASF at Kangyambem, Lokchao, SalungphamMamangLeikai.
At the same time, Imphal East District administration in its order on January 4, declared a piggery farm as “infected premises” at NongmaichingChingkhong (Wakha) area in the district.
The district administrations also banned sale of pig, pork, feed and related items in these “controlled area” and “infected zones” apart from restricting the movement of pig from the place where it is kept within the above area and zone, the orders said.
“Any person/institution/ organisation found violating any of those containment measures shall be deemed to have committed an offence punishable under the Act,” it said.
ASF continues to pose challenges for the global pork industry. Research continues throughout the world to gain more knowledge about this disease and to pursue vaccine development.
Source: Hindustan Times