India may have to import milk in four years, if it cannot increase fodder supply for its 299 million cattle, as rising pressure on land reduces pastures nationwide.
Spurred by rising incomes, a growing population and changing food preferences, the demand for milk and milk products will grow to at least 210 million tons by 2021–22, a rise of 36% over five years, according to government estimates. To meet this demand, production must grow by 5.5% per annum, according to the State of India’s Livelihood (SOIL) report.
To boost milk yield, India would need to generate 1,764 million tons of fodder by 2020, according to an IndiaSpend analysis of government data. But existing sources can only manage about 900 million tons of fodder–a shortage of 49%.
In the decade to 2015, milk production went up 59% from 92 million tons to 146 million tons in 2015. But fodder shortages may knock India off its position as the world’s top milk producer.
The milk productivity of India’s livestock is less than half (48%) of the global average: 987 kg per lactation compared to the global average of 2,038 kg per lactation.
The availability and quality of fodder has a direct bearing on the quantity and quality of milk productivity, the data show. All the three states that topped milk productivity in terms of gram per day–Rajasthan (704), Haryana (877) and Punjab (1,032)–had earmarked more than 10% of their cultivable land for pastures, according to the 2015 SOIL report. The national average is 337.
Currently, all three types of fodder are in short supply–green (63%), dry (24%) and concentrates (76%). Only 4% of total cultivable land in India is used for fodder production, a proportion that has remained stagnant for the last four decades.
Considering the demand for milk, land under fodder production needs to be doubled, according to this December 2016 report of the Parliamentary Committee on Agriculture. Shortages are forcing states to now source fodder from elsewhere.
However, the availability of crop residues, the largest single source of fodder, has been impacted by increasing pressure on land and the replacement of traditional cereal crops, especially coarse ones. Crop residue includes coarse and fine straws, leguminous and pulses straws.
Given the importance of food and cash crops, it is very unlikely that the area under fodder cultivation will increase substantially, the parliamentary committee report said.
“If India fails to achieve substantial production growth, the country would need to resort to significant imports from the world market which has the potential to cause prices to spurt since India is a large consumer,” said 2015 SOIL report
To cut costs, easy access to fodder is important for small farmers
Feed cost constitutes about 60-70% of operating expenses on dairy farms. Nearly 70% of India’s milk production comes from small and marginal farmers, who depend on homegrown fodder. 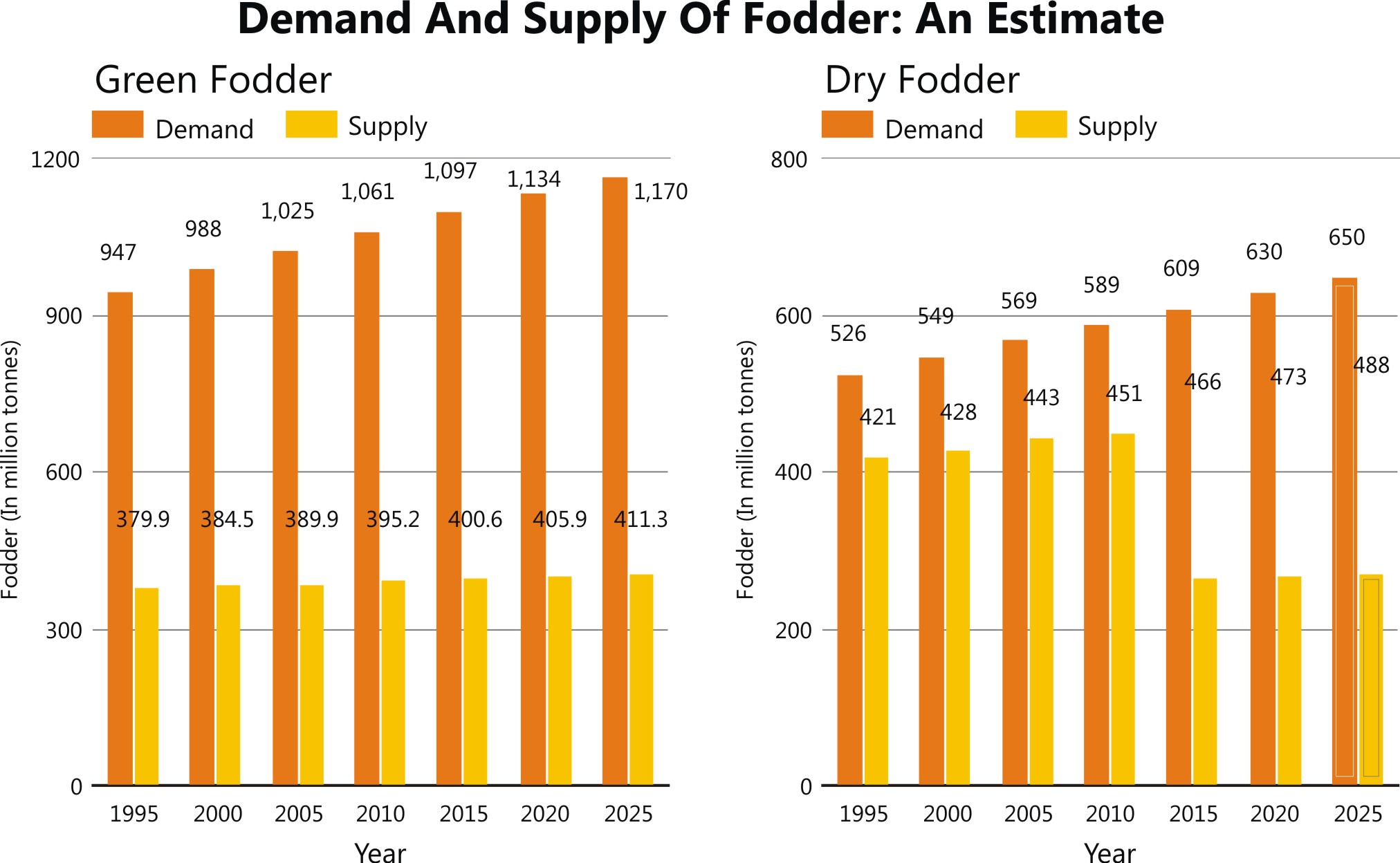 The contribution of livestock to the incomes of landless and small farmers ranges between 20-50%, and the poorer the family, the greater the potential of dairy farming’s contribution to livelihood, according to the SOIL report.
Unlike agriculture, which tends to be seasonal, dairy farming provides returns through the year. It can minimise the risks agricultural households face when they run short of cash.
Source: Indiaspend