A leading fishmeal analyst believes that while limited supply and increasing demand may eventually cause ‘tight’ markets, global prices are likely to exhibit ‘softness’ over the next two years.
Speaking at the recent Fish-Free Feed Challenge, Rabobank senior analyst Gorjan Nikolik said that a confluence of factors are driving the fishmeal market, principally, a recent rise in Peruvian anchovy supply after years of depressed stocks due to El Nino.
“We think that if the Peruvian industry starts to recover because the El Nino is no longer there, the next near term will probably be around $1,200 to $1,700/ton,” he said, adding that higher quotas in the next one or two years are likely to cause price “softness”.
Fishmeal is currently priced at $1,500-1,550 per metric ton, according to industry sources, while fish oil is currently at $1,700-1,800/t, depending on the quality, according to several producers.
Peruvian anchovy
The Peruvian anchovy biomass needs to be at a minimum of 5 million metric tons to allow for fishing. This condition wasn’t met during Peru’s second anchovy season of 2014 and fishing was closed, kicking off a wave of tough times for producers and helped to cause the bankruptcy of the Pacific Andes group’s China Fishery.
Those concerns appear to be abating. The second season 2016 anchovy total allowable catch (TAC) in the important north-central zone was set at 2mt, an 81% rise year-on-year. Harvesters are close to meeting that quota, as per industry sources. “El Nino is probably finally gone from Peruvian waters. We expect the next few TACs will be quite high because there is no El Nino,” Nikolik said.
European regulators’ recent decision to raise the TACs for blue whiting, a fishmeal species, will also contribute, he added.
Longer term
While supplies are up in the short-term, looking further out aquaculture’s demand for fishmeal coupled with limited supply means a bullish outlook for both fishmeal producers and the makers of substitutes, Nikolik said.
Global supplies of fishmeal have seen a decline over the last two decades of about 2mt.
Additionally, although trimmings recovered from wild-caught and farm-fish are expected to rise in the next several years, the industry may use this new supply for pet food and other manufactured products. 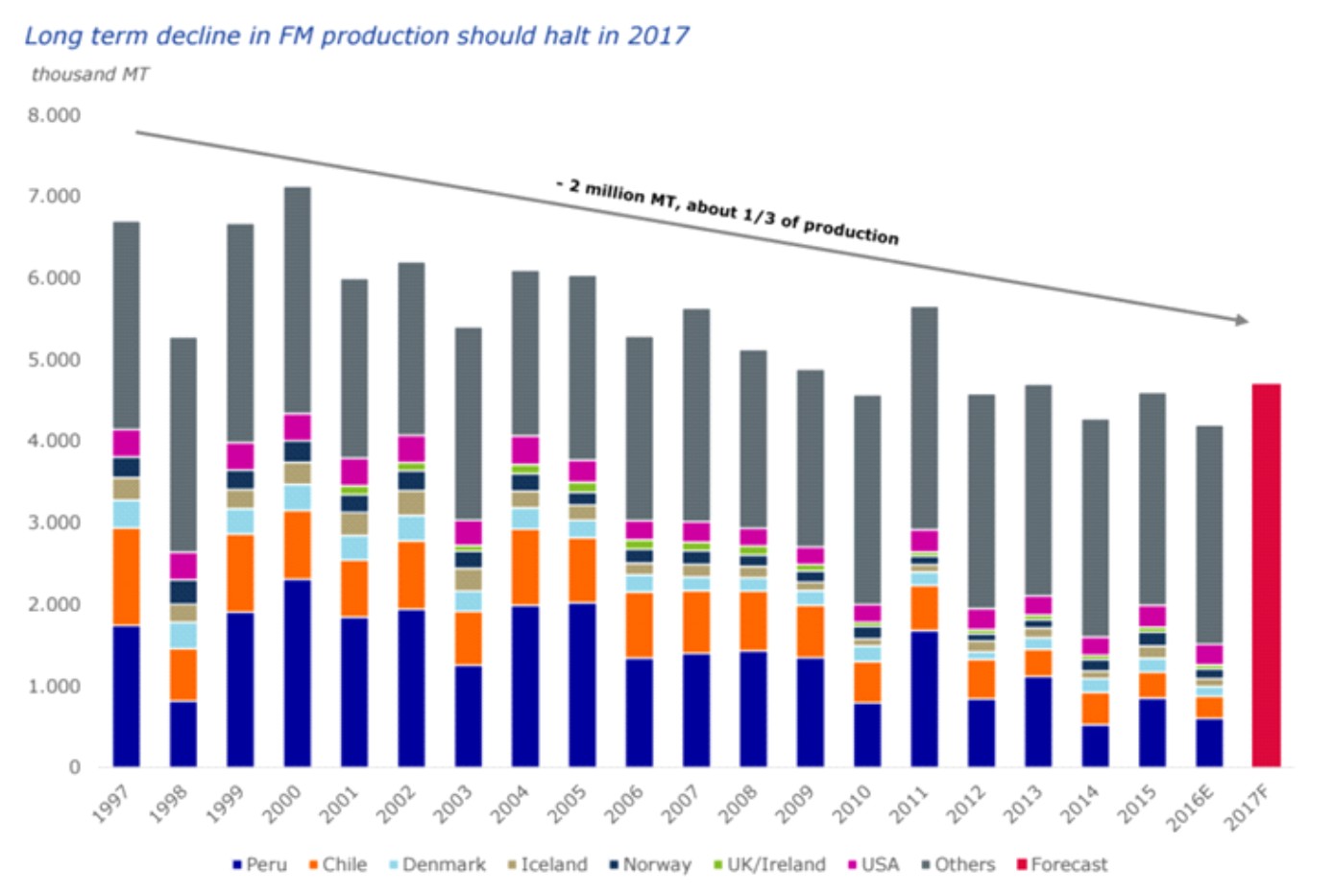 Successful seafood processors can use trimmings to make soups, burgers and other products rather than producing fishmeal for aquaculture. “This part is much more valuable than fishmeal, about five times more,” he said.
Although aquaculture has become the predominant user of fishmeal in recent decades, taking over three-quarters of total global production, Nikolik said, it’s unlikely that the poultry and swine sectors will be able to give up much more.
Alternative feeds
There are limitations too to the extent that fish feed makers can further reduce the amount of fishmeal they use.
Formulators have done a “terrific” job turning carnivorous fish into vegetarians, Nikolik said.
In the 1990s, vegetable-based materials only made up 10% of fish feeds. Now, many feeds consist of over 50% vegetable-based materials with only 30% coming from fishmeal and fish oil.
“The salmon have become largely vegetarian but to keep up with our insatiable demand for these species, we really need to bring it down to 50%, almost like the pepper on your meal,” he said. 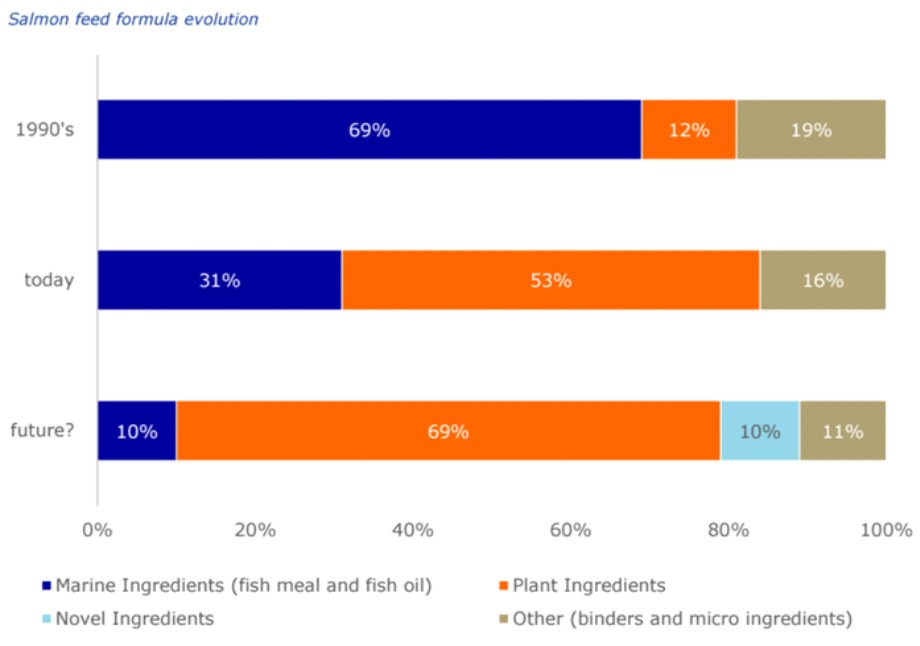 Alternative feeds and improved genetics can lower the amount of fishmeal required but it may be a “bumpy road” for upstarts selling alternatives as they vie to achieve scale and market acceptance of their technologies.
‘Strategic’ ingredient
The pricing of both fishmeal and fish oil had historically moved in concert with their soybean-based counterparts. But, Nikolik said that fish oil prices haven’t behaved that way since 2011, demonstrating a lack of substitutability with soy oil.
Fishmeal’s correlation with soymeal has largely held although recently fishmeal has commanded higher prices as a ‘strategic protein’.
Demand shift
It is estimated that seafood consumption will rise rapidly in the coming decades from nearly 150mt currently to 200mt by 2030.
As wild-catch fisheries are expected to remain stagnant at best, all new growth will come from aquaculture. And some of the species in highest demand — shrimp, salmon, and catfish — are being farmed using “intensive” methods that will require more fishmeal.
Demand for fishmeal is concentrated from intensive aquaculture, demand for which is rising as it doesn’t require as much land, Nikolik said. “This is increasing for everything, even carp aquaculture has increasing uses of fishmeal,” he added.
The species in the highest demand are carnivorous species, which also attract the highest prices and are the focus of the industry’s research and development efforts such as bluefin tuna.
“In fact the very high fishmeal price right now is holding back their development. If we had a lower fishmeal price or many alternatives these are the species that would keep demand growing and increase it to the next level,” he said.
Source: Undercurrent