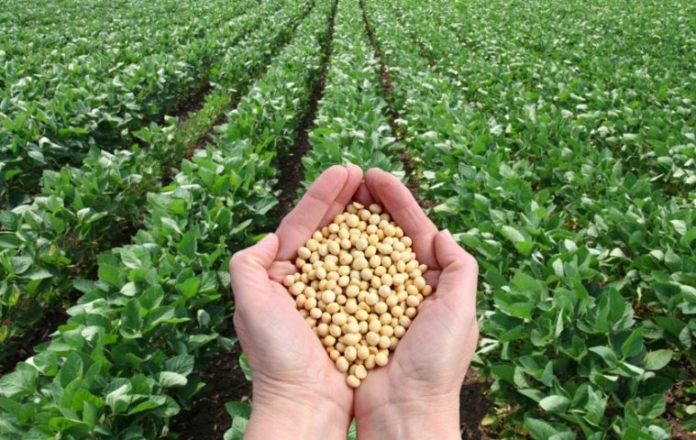 A deadly pig disease spreading through China is reshaping the global soybean market for years to come. Getting rid of the disease and rebuilding the herd in a nation that consumes half the world’s pork will take three to five years, curbing demand for soybeans used in feed, according to analysts.
Given China is the largest soybean importer and most of its shipments usually come from the U.S., the oilseed has been the poster-child for the tit-for-tat tariff spat. While trade tensions have prompted China’s feed makers to curb the oilseed’s usage, it’s the pig virus that will upend the market. The U.S. Department of Agriculture and INTL FCStone Inc. are already forecasting a decline or slower growth in Chinese soy imports for the next couple of years.
“Today, African swine fever is the bigger story as it relates to demand,” said Corey Jorgenson, president of the grain unit of U.S. crop handler The Andersons Inc., which buys and sells corn, wheat and soybeans from American farmers. “It will impact us for a crop year or more. This is not a 2019 event.”
African swine fever, first spotted in Africa in the 1900s, kills most infected pigs within 10 days, although it isn’t known to harm humans. China has already culled more than a million pigs after 122 outbreaks in 30 provinces. The disease shows no signs of abating.
Pork production in China probably will decline about 30 percent this year, a drop roughly the size of Europe’s entire annual supply, according to Rabobank, a top lender to the agriculture industry. The number of breeding sows in China already slumped 21 percent in March from a year earlier, according to a report by the Ministry of Agriculture and Rural Affairs published recently.
The bank says it will take at least three years to rebuild the herd. Informa’s Agribusiness Intelligence is betting on three years, while brokerage FCStone expects at least five years.
The structure of China’s pork industry makes it “nearly impossible” to stop the spread of African swine fever, said Arlan Suderman, chief commodities economist for FCStone. That’s because a large part of the production and slaughter is in small family-owned operations. Many farmers who had the disease and tried to repopulate their herds ended up getting it again, according to Informa.
Chinese soy imports dropped 14 percent in the first quarter, partly as the trade war pushed feed makers to switch to alternatives. While some fear that could be a permanent change, Jim Sutter, the chief executive officer of the U.S. Soybean Export Council, says feed makers would return to using whatever is more economical when the trade war ends, and that includes soy.
Soybean imports by China are forecast to decline for the first time in 15 years to 88 million tons this season and FCStone says purchases could drop again to 71 million tons in 2019-20 due to the impact of African swine fever — the firm’s forecast also assumes the continuation of the tariff dispute. The USDA’s Foreign Agriculture Service still expects imports to grow next season, albeit at a slower pace. They’d still remain below levels reached in 2017-18.
China is buying enough soybeans “that they don’t need to try to influence the trade talks,” said Suderman. “That is masking the drop in consumption right now, but that means they will have more soybeans in storage that they can use down the road as well, so eventually we will see that full drop in demand.”
It’s not all bad news for the soybean market. In the medium term, China will need to import more pork and other meats. As a result, American pork exports will probably jump 20 percent this year, while European Union shipments could climb 10 to 15 percent, Informa estimates. All of that will require expansion of herds, boosting demand for soy meal and increasing crush margins for the likes of Archer-Daniels-Midland Co. and Bunge Ltd.
The spread of the virus combined with China’s voracious appetite for pork means June hog futures are already up 21 percent this year, the best performing agricultural benchmark in the Bloomberg Commodity Index. Pork prices are expected to rise by more than 20 percent in the U.S. this year and 15 percent in Western Europe, according to Informa forecasts.
Source: bloomberg