Phytogenics can be a potential solution to antibiotics, but there is much confusion on its usage and efficacy, and how it impacts the cost of production. To find answers Think Grain Think Feed (TGTF) connected with Dr. L N Saikia who is working with a leading integration group that is operating in 16+ states, Dr. Mridu Pawan Hazarika who is working with 8000+ tribal women farmers, and Dr. Jeetendra Verma who is an expert in phytogenics. Read the excerpts below: 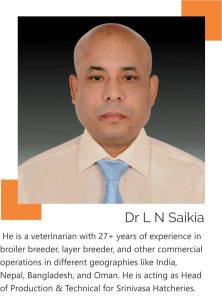 Dr L N Saikia
Phytogenics in India
It is not a new concept in India; this has been started more than a decade back. Especially, after a ban on antibiotics in the year 2005 in Europe, there has been an increase in public awareness across the globe. The growth of the Indian Poultry industry is fueled by the concept of fighting protein deficiency by producing healthy & safe chicken using antibiotics but as the industry evolved, Phytogenics have become a necessity but this is also not a silver bullet that can resolve all issues and we have constraints here as well.
Dr. Jeetendra Verma
Phytogenics is an old science and has been practiced in India for a long time. The only 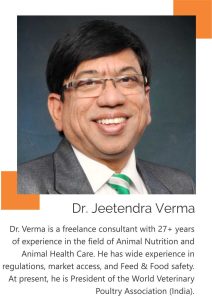 issue was the stability and proper evaluation of the active ingredient. With the latest technology from Europe and even India, we now have stabilized product so that active ingredient remains there until it is consumed by birds. Microencapsulation of essential oil is the main component that allows the essential oil to reach the small intestine.
So, phytogenics is a new trend coming up as we have to get away from antibiotics even the low doses of antibiotic growth promoters. The international organizations and the government of India are suggesting judicious and prudent use of antibiotics. Steward principle should be utilized where a veterinarian should prescribe and then it should be used. Different modules for different situations have to be used.
Efficacy of Phytogenics
There is a lot to learn about the mode of action of Phytogenics which is not the case with allopathy. As of present, this is more of experience or trial based. More research is required in this area. Right management with Phytogenics and vaccination is the way forward for the industry.
Dr. Jeetendra Verma
A lot of research is already going on in Phytogenics. Earlier, there were issues in the efficacy of the product but with the latest developments, the products are more stabilized and give the same results. But as of present, a combination of additives along with biosecurity and vaccination schedule can help the farmer to reduce the usage of AGPs or produce antibiotic-free chicken.
Does it add to production costs?
It can add to the cost if it is used as an addition rather than a replacement. Because of its antibacterial properties, it can replace antibiotics.
Dr. Jeetandra Verma
No, it is rather adding value to the product which is a pressure coming from the consumer. The feed industry is exactly in the food business, whatever we produce is actually producing food products whether it is milk, chicken, or eggs. Being a part of the food value chain, it is also our responsibility to produce safe, hygienic, and nutritious food and also give choices to our consumers.
It is the consumer pressure rather than the regulations which are bringing this paradigm shift in consumer preference for antibiotic-free chicken or eggs. With improved buying capacity, the consumer is ready to pay for value-added products.
Judicious use of antibiotics
The antibiotics should be used judiciously i.e., in a proper dosage with a withdrawal period so that a safe end product is produced. 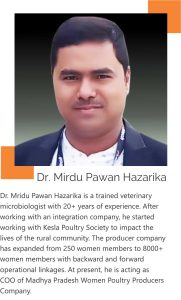 Dr. Mridu Pawan Hazarika is holding his Master in veterinary microbiology with 18+ years of experience working in the development sector associated with poultry cooperatives of tribal women farmers. After completing his education in 2004, he initially had some experiences of Cobb broiler breeding operations with a reputed breeding company at Hyderabad. He started working with Kesla Poultry Society with the purpose of impacting the lives of the rural community particularly working with poor tribal women farmers in Madhya Pradesh in 2004. The producer company has expanded from 250 women members to 8000+ women members with backward and forward operational linkages. At present, he is acting as COO of Madhya Pradesh Women Poultry Producers Company.

Rural Poultry Farming
Madhya Pradesh Women Poultry Producers Company is a federation of 14 primary cooperatives/ producer companies in the state of Madhya Pradesh. The company comes under the umbrella of “National Small poultry development trust” which is a non for profit organization working with tribal women in the poorest pockets of India like MP, Jharkhand, Assam, and Vidarbha. Currently altogether 3 state level Federations & 30 primary cooperatives/producer companies anchors 16000+ tribal small holder women poultry farmers.   An average smallholder poultry farmer rears 500-1000 birds in her backyard in a well constructed concrete poultry shed which is basically a mini version of commercial farming. Each women farmers are the shareholders of the respective poultry producer cooperative/producer company she is associated with. In this model, a woman farmer rears 5 to 6 broiler batches in a year earns a profit of Rs 40,000-80,000 by rearing 500-1000 birds which requires hardly 3-4 hours engagement in a day. With this activity helps the women farmers to stay back at her home supporting her family & children’s education more prominently preventing mass seasonal migration in search of migrated wages.   All the forward & backward linkages are supported by the cooperatives & its federation and it is also responsible to ensure best realization rates of the end product which is sold under the brand name “Sukhtava Chicken”.

Feed is the most important cost component of the broiler industry which contributes ~70% of the total cost. MPWPCL has one of the biggest feed plant in central India where different types of ingredients are used.”Being a veterinarian from Assam, we have a great heritage of use of phytobiotics in human and animal health” Dr Hazarika expressed. MPWPCL have been using herbal choline for more than 18 years along with probiotics,prebiotic, organic acidifiers, and organic minerals,essential oil in broiler ration.

Strength of cooperative model
The best strength of this model is that each of the member farmers has small and scattered farms, and hence has the least chances of transfer of diseases from one farm to another. Unlike the commercial farm where 1-1.5 lakh are under single vicinity whereas in this model an individual woman has 500-1000 birds in the backyard and the adjacent farm is distantly located which is the best in-house biosecurity model.

Upcoming chicken processing plant
At present, 95 % of our production is sold in the open market through traders as India is still a wet market. But we also have some dedicated retail shops for Suktava Chicken in Bhopal, the model is getting replicated in other districts too. In the next few months, we are also coming up with a chicken processing plant which is supported by the department of foreign trade & affairs (DFAT) of the Australian Government.

Growth trajectory
The functional model is almost comparable to the commercial integration model. But the major difference with commercial integration is that -in the small holder poultry model the poultry farmers are the shareholders of the organization. So she is the ultimate business surplus claimer. So if a cooperative / producer company makes profit at year end the farmers are receiving bonus additionally.

Again as the primary cooperatives/ producer companies are shareholders to the state level federation, the primary cooperatives / producer companies are also business surplus claimants from the federation when it makes profit.  And the primary women farmers are ultimately benefited. A substantial proportion of the business surplus is again reinvested in the federation by the farmers for the future expansion/ growth of the organizations. In next few years the organization has a mission to promote a total 20,000 women tribal farmers with 50 primary producer organizations.

Tips for the operational team of feed mill