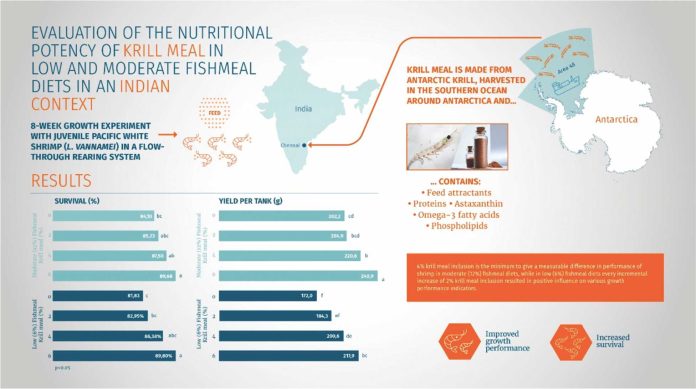 A new study, conducted by India’s Central Institute of Brackishwater Aquaculture (ICAR) and Aker BioMarine, concluded that krill meal is a beneficial functional ingredient for Whiteleg shrimp (Penaeus vannamei) dietary feed. The eight-week feeding trial revealed that inclusion of 4 to 6% krill meal in the diet can lead to higher body weight and greater survival among the shrimp.
“The shrimp industry is in pursuit of more sustainable and beneficial dietary feeds, and it is important to understand how functional ingredients, such as krill meal, can lead to better outcomes. This recent shrimp study out of India indicates that krill meal inclusion, at levels between 4 to 6%, can have a positive effect on shrimp survival, body weight and fatty acid concentration in the body,” said Lena Burri, Director R&D, Animal Nutrition and Health, Aker BioMarine.
Setting up the experiment
Run from the ICAR facility in India, this feeding trial analyzed the impact of krill meal on shrimp diets with moderate (12%) and low (6%) fishmeal concentrations. Varying amounts of krill, between 0 to 6%, were added to these diets, which the shrimp received thrice daily throughout the experiment.
Key findings:

2% krill meal in a diet containing 12% fishmeal significantly increased the expression of six immune-related genes in the hepatopancreas of the shrimp.
“The results of this experiment show that krill meal, when supplemented in amounts between 4 and 6%, is a beneficial functional ingredient for both moderate and low fishmeal diets. This finding is based on the increased growth performance in the groups consuming krill meal and overall improved survival rates, leading us to our conclusion that krill meal can be a viable supplement to fishmeal in shrimp feeds,” said Dr. Ambasankar, ICAR.
The role of krill meal in India’s shrimp industry
India is considered one of the world’s largest markets for shrimp, earning it the title of “shrimp garden of the world”. In 2020-21, the country exported nearly 11.5 million tons of seafood, with frozen shrimp comprising the majority. Shrimp farmers in India continue to seek ways to improve profitability and productivity, with higher survival rates and larger-sized shrimp serving as key opportunities.
“India is a major exporter of shrimp to the U.S., European and Asian markets, and its position in the shrimp industry will depend on its ability to remain competitive, run sustainably and meet higher productivity targets – through bigger and healthier shrimp. The dietary feed plays a major role in helping shrimp producers achieve these goals, which is why it is essential to uncover the functional ingredients, such as krill meal, that can help them achieve optimal results,” said Atul Barman, Director & General Manager, Aker BioMarine India.
Source: Qrill Aqua