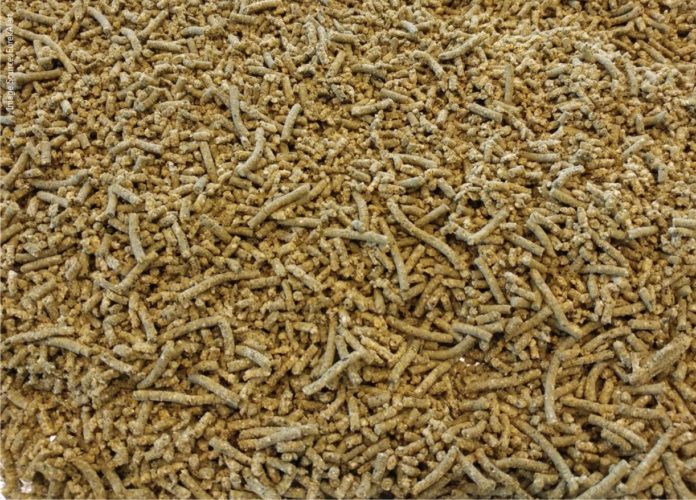 Dartmouth scientists have created a more sustainable feed for aquaculture by using a marine microalga co-product as a feed ingredient. The study is the first of its kind to evaluate replacing fishmeal with a co-product in feed designed specifically for Nile tilapia. The results are published in the open access journal, PLOS ONE.
Aquaculture is the world’s fastest growing food sector, surpassing the global capture fisheries production in 2014. It provides more than 50 percent of the food supply to humans; however, it poses several environmental concerns. Aquaculture feed draws on 70 percent of the world’s fishmeal and fish oil, which is obtained from small, ocean-caught fish such as anchovies, sardines, herring, menhaden, and mackerel, that are essential to the lower end of the marine food chain. Analysts project that by 2040, the demand for fishmeal and fish oil will exceed supply. Aquafeeds also draw on large amounts of soy and corn from industrial farms, which pose other environmental concerns due to the use of fertilizers and potential runoff into rivers, lakes and coastal waters. In addition, aquafeeds may trigger nutrient pollution in aquaculture effluent, as fish are unable to fully digest soy and corn, which are major feed ingredients.
To address the environmental sustainability concerns regarding aquafeed, a Dartmouth team has been developing sustainable feeds for Nile tilapia, which examine the effectiveness of replacing fishmeal and fish oil with different types of marine microalgae. Marine microalgae are excellent sources of essential amino acids, minerals, vitamins, and omega-3 fatty acids, and can therefore, meet the nutrient requirements of fish. Omega-3 fatty acids are important for maintaining fish health; they also have neurological, cardiovascular and anti-cancer benefits to humans.
The Dartmouth research team’s latest work replaces fishmeal with a marine microalga co-product, Nannochloropsisoculata, which is rich in both protein and omega-3 fatty acids, including eicosapentaenoic acid, that are essential to fish growth and quality. The co-products are left-over algae meal, after the oils have been extracted from commercially-grown algae biomass to manufacture nutraceuticals, chemicals and fuel applications. The co-product is available at commercial scale and continued increases in supply are expected. The study’s findings show promise in replacing conventional protein ingredients in tilapia feeds.
The results demonstrated that the co-product had higher protein content than the whole cells but had lower digestibility than whole cells. The co-product showed the highest digestibility of lysine, an essential amino acid that is often deficient in terrestrial crop-based aquafeed ingredients, as well as the highest eicosapentaenoic acid (EPA) digestibility.
The team also evaluated several feeds with varying percentages of co-product replacing fishmeal. When 33 percent of fishmeal was replaced with the co-product, the Nile tilapia had fish growth and a feed conversion ratio and survival rate similar to those on the reference diet for which fishmeal was seven percent of the diet. The team hypothesizes that the co-product may need to be enhanced with enzyme(s) to maximize nutrient availability and counter the lower digestibility observed in the experiment.
“The possibilities for developing a sustainable approach to aquaculture are exciting. Our society has an opportunity to shift aquafeed’s reliance on fish-based ingredients to a fish-free product that is based on marine microalgae, and our findings provide new insight into how we can get there,” says lead author, PallabSarker, a research assistant professor at Dartmouth.
As part of the team’s goal to eliminate aquafeed’s reliance on marine fish and terrestrial crop inputs, they are combining Nannochloropsis co-product with other marine microalgae to make aquaculture feeds more sustainable
Source: phys