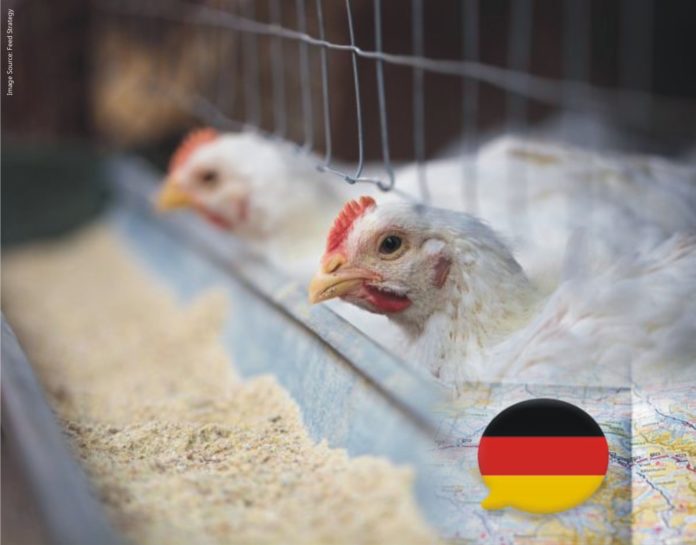 Worldwide there is a growing demand for animal products for human nutrition, despite vegan and vegetarian diets becoming more popular in Western countries. Changing diets necessitate a substantial amount of protein as an input for animal production. Future protein feedstuffs will need to become independent of arable land in order to avoid further land use changes, such as deforestation. The cultivation of insects as well as microalgae are up-and-coming sectors in Germany, as well as globally, to meet protein demands for humans and animals alike.
Therefore, a research team at the University of Gottingen, investigated whether the meat quality of chickens fed with certain insects or microalgae was suitable for human consumption. The results have been published in the Journal of the Science of Food and Agriculture (JSFA).
In a study conducted as a part of the project “Sustainability Transitions in the Food Production”, broiler chickens were fattened using feed with the main protein sources being soybean meal, spirulina, or insects. Animal growth, meat quality (especially concerning shelf life), and eating quality were investigated. Their results of laboratory testing and sensory (taste-testing) analyses across 132 birds gave following results:

“Overall, both prove to be potential soybean meal alternatives in the search for new protein sources for animal feed,” as explained by the study lead researcher Dr Brianne Altmann.
Microalgae are currently produced globally for biofuel, animal feed, and human consumption; however, they remain much more expensive than soybean meal. Currently in the European Union (EU), insects are only authorized for human consumption and for fish feed; they are likely to be approved for poultry feed in the near future. In the EU, all insects must be produced using certified animal feedstuffs. However, “sustainability necessitates the incorporation of waste products in the production of insects,” explains Professor Daniel Mörlein, professor for the Quality of Animal Products.
Three groups at the Faculty of Agricultural Sciences, University of Göttingen, are currently examining the foundations for more sustainable and socially-accepted plant and animal-based foods. Product perception as well as consumer acceptance studies are commonly conducted in the faculty’s modern sensory laboratory.