In March, the USDA estimation of planting caught the industry by surprise, which had expected higher availability of corn and soy than reported. Last week, the monthly World Agricultural Supply and Demand Estimates (WASDE) report was released, and as expected, showed sufficient supply owing to larger crop from Brazil.

Why do these reports matter? First, they are highly anticipated by the industry in their ability to impact market prices. Second, they are highly indicative of the way market intelligence is done today. While these reports are invaluable in their measurement and reflection of the industry, they mainly measure supply while estimating or extrapolating demand. Rarely, in market intelligence, are there opportunities to measure demand directly. The demand side of the market is considerably more fragmented, and thus more difficult to accurately measure let alone forecast. 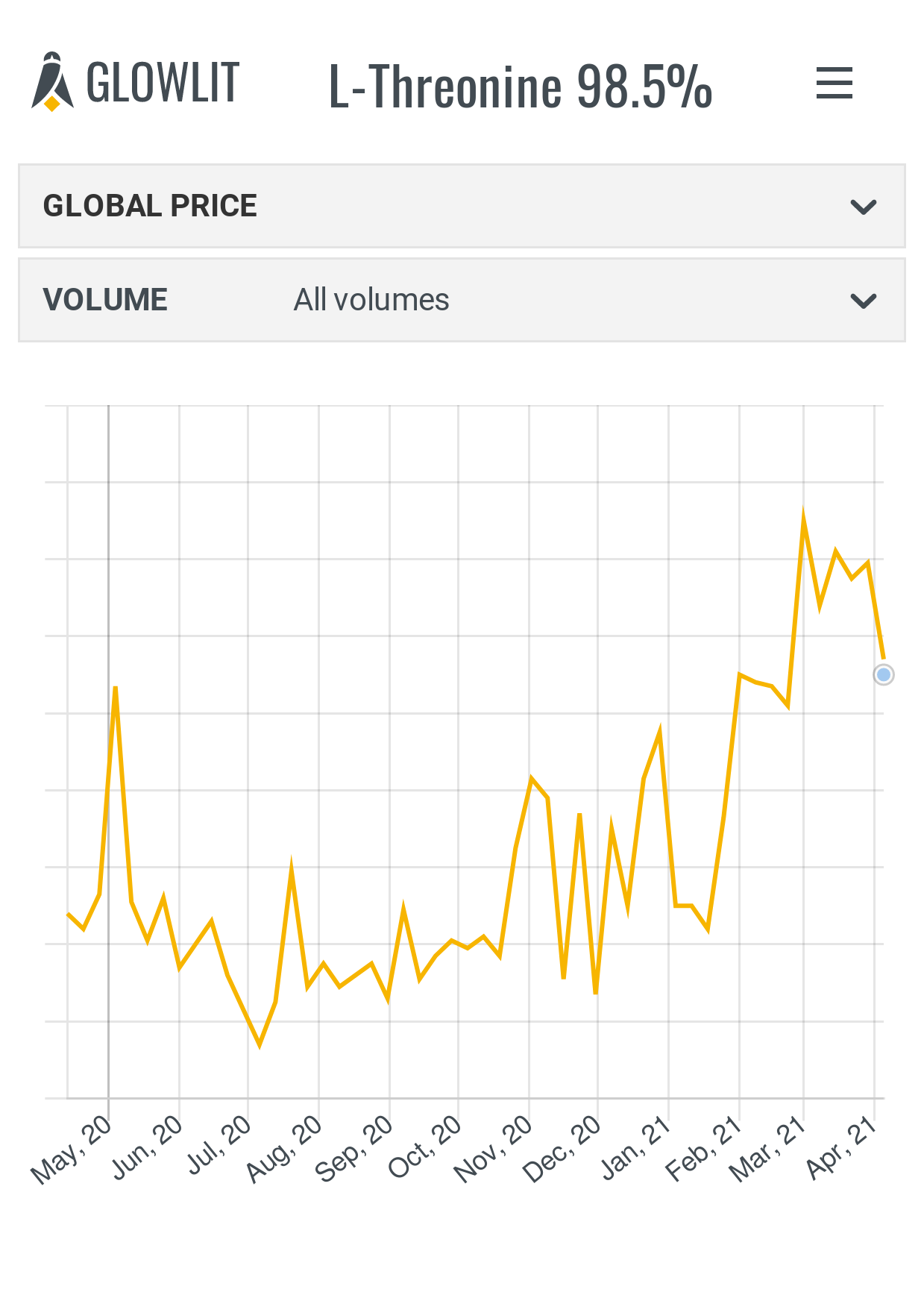 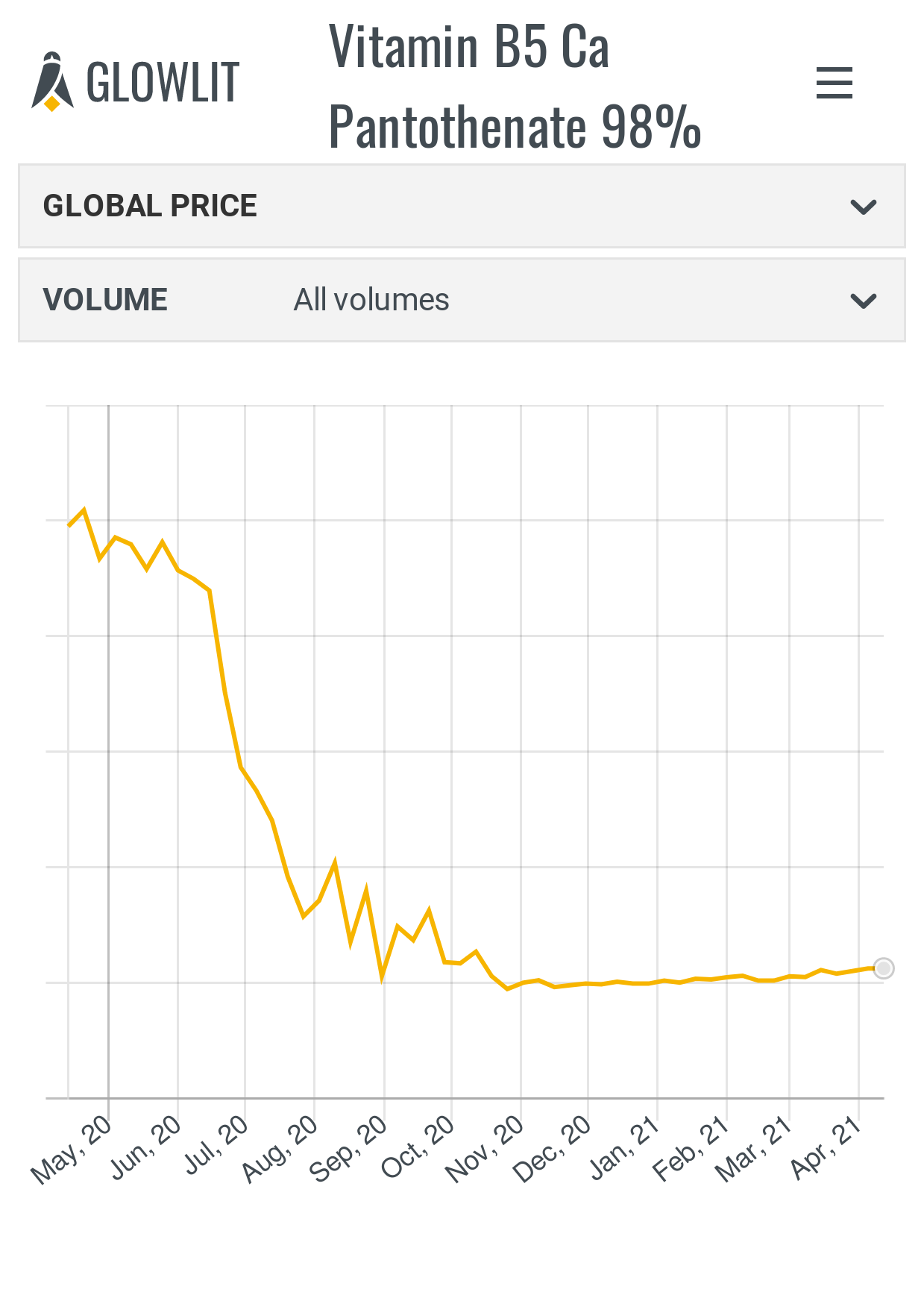 Glowlit was developed to meet the challenge of demand side market intelligence. As you’ll see in our newsletter, we always consider these critical supply fundamentals as a compliment to demand side Glowlit data. When measured directly, and then taken together, they give us powerful information on the movement in our industry.
Here are some of the most significant market trends identified by Glowlit in the last week:

Several recent developments related to Calpan (Vitamin B5) have buyers bracing for a shift in the market. On April 7th, Huazhong Pharmaceutical announced that it will be acquiring Zaoyang Jin’ante Chemical Co. as a wholly-owned subsidiary. Jin’ante has the production technology for critical Vitamin B5 intermediates. Through this acquisition, Huazhong Pharmaceutical has perfected the vitamin B5 production chain. Additionally, DSM has announced that the price of calcium pantothenate has increased by 40%. Both pieces of news indicate upward movement in price.

At the same time, Ningxia Youwei Biotechnology has announced an expansion of 4,000 Tons per year for its Vitamin B5 project. Both pig and poultry feed consumption across China is not meeting previously projected expectations, leading to relatively weak downstream demand and higher availability of stock. Stock from the Spring Festival period has yet to be fully utilized. In line with this weaker demand, Glowlit shows little movement in price despite the announcements from DSM and Huazhong Pharmaceutical.

Threonine prices decline, but for how long?

With so much of the global capacity located in one place, announcements are critical for understanding future trends. Similarly, with so much of the global demand coming from China, we can draw a number of conclusions based on the state of Chinese demand which has a direct impact on Chinese production. On the demand side, the Animal Husbandry and Veterinary Bureau of the Ministry of Agriculture and Rural Affairs issued a work program aimed at reducing or replacing corn and soybean meal in feeds. This plan should be fully implemented within 1-2 months. This change in core feed ingredients will challenge Chinese nutritionists as formulations are rebalanced, fundamentally altering feed additive demand.