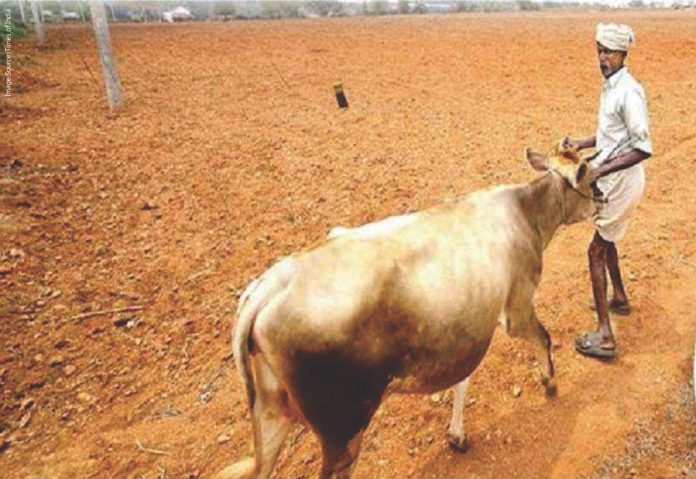 Wheat straw is being sold at Rs 1100-1700per quintal; it was being sold at Rs 400-600 per quintal last year.
Farmers across north Indian states are facing a shortage of dry fodder due to the wheat crisis, which in turn, has been primarily fueled by an unusually hot March, according to farmers, agricultural scientists and experts.
Many farmers chose to plant mustard instead of wheat this rabi season in north India. This is not just because mustard requires less water than wheat but also because the crop was getting better prices.
The shortage of wheat yield has led to a crisis of cattle feed in many northern states. Several of them, including Haryana, Uttar Pradesh, and Uttarakhand, have imposed a complete or indefinite ban on sending straw to other states.
Wheat straw is now being sold at two to three times the rates of last year. It was being sold at Rs 400-600 per quintal last year. It is now being sold at Rs 1100-1700 per quintal. Wheat straw in Bikaner, Rajasthan, is being sold at Rs 2000 per quintal.
Several farmers also complained about the acute shortage of fodder across north India due to the hot climate and they think this would get worse in the coming years.
VK Singh, deputy director of the animal husbandry department in Uttar Pradesh, cited, “the biggest reason for the shortage of fodder is mechanization. Farmers cannot get straw if they thresh wheat with a machine. Farmers, instead, have to burn their fields. Thus, animals can’t graze”.
He added that due to declining land holdings, farmers now prefer to grow cereals or fruits and vegetables. Also, the village commons that were used for grazing, have been heavily encroached upon.
Hungry livestock
India has the world’s largest number of farmers and livestock. It has 535 million livestock animals according to the 20th Livestock Census conducted in 2019, most of them are cattle, followed by water buffaloes.
These are also the animals that eat the most fodder, especially straw because it can be stored for a long time.According to agricultural and livestock scientists, a cow and a buffalo need an average of 4-8 kg of straw. This quantity can increase in the absence of green fodder.
Putaan Singh, a scientist at the Indian Veterinary Research Institute in Palampur, Himachal Pradesh, said, “straw is the major source of fodder for livestock in India. A buffalo giving 10 litres of milk needs an average of 30 kg of fodder a day. This should consist of four kg of grain, 4-5 kg of straw, and the rest of green fodder. But in the absence of green fodder, farmers become dependent on straw”.
Putaan Singh said there were two main ways to tackle the fodder crisis. “One is that the government imposes a complete ban on the commercial use of straw. The use of straw in the paper industry and brick kilns needs to be stopped.”
He added that farmers should also sow green fodder. There are many varieties that give up to 4-6 harvests once planted.
“Sugar mills can make bricks from straw, molasses, and bagasse. This will not only be useful and nutritious for livestock but sugar mills will also get work all year round,” he said.
VK Singh said his department was doing its best to tackle the fodder crisis. “District magistrates and allied departments have come out with tenders. A lot of people are also donating straw. Apart from this, we have given seeds to farmers to grow green fodder,” he said.
Source: Downtoearth