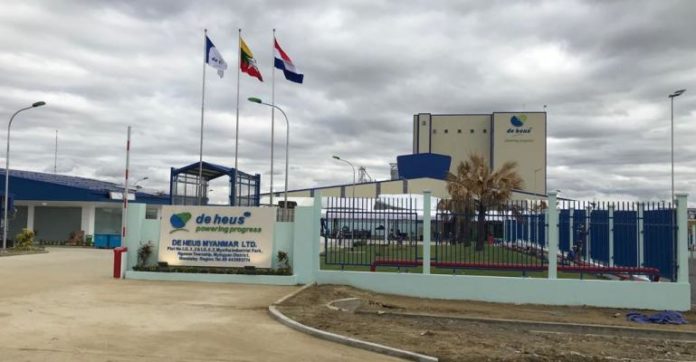 Animal feed firm De Heus recently announced the launch of its second production site in Myanmar. This feed plant in Mandalay, combined with the Yangon facility, will enable the Netherlands-based company to tap into the growing demand in both upper and lower Myanmar markets.
Located on 26,000 square metres in Myotha Industrial Park near Mandalay, the factory has an annual production capacity of 280,000 MT and is supported by a rooftop solar installation, making it among the Myanmar’s most sustainable feed production site.
Royal de Heus, a family-owned company headquartered in the Netherlands, was founded in 1911. In Asia, it is present in China, India, Vietnam and Myanmar.
The Myotha factory involves USD 16 million, while the overall investment in the country has now exceeded USD 30 million, according to Johan van den Ban, managing director of De Heus Myanmar.
Mr Van den Ban told The Myanmar Times that building a plant in Myotha will allow De Heus to meet the growing demand and increase the sales volumes in upper Myanmar “significantly”. With production capacity at the Yangon site having already reached its limit and monthly sales figures still rising fast, a second production site was required.
He expected an annual growth of around 15-20 percent for the livestock drug market in the coming years, as consumption of animal proteins through meat, milk, eggs and fish is increasing rapidly.
“Since our arrival in Myanmar, the livestock sector has gradually developed. De Heus Myanmar has now become the leading supplier of animal nutrition solutions to independent farmers nationwide,” Mr Van den Ban remarked, adding that the technical know-how and quality feed will help scale up Myanmar’s production of animal protein and facilitate the professionalization of the livestock sector.
“I am particularly proud that by investing in a 516kW rooftop-based solar energy system, which is able to produce 663MWh of renewable energy per year, we will save 1.5MT of CO2 emission. Thereby, we have established the most sustainable feed mill in Myanmar.
He also highlighted a few areas where the country should work on in order for the sector to flourish. First of all, strict policies to prevent for illegal imports of animal protein products, including live animals, from Thailand and China should be in place and enforced. Nay Pyi Taw has to protect the domestic livestock farmers, as in the current condition it’s challenging for them to be competitive. Secondly, access to finance for livestock farmers, both working capital and loans to invest, should be enhanced. The sector has to modernise, which requires capital. Currently, farmers are generally not able to get a loan, because banks only offer simple collateral-based loans.
Other than that, a clear legal framework, including land law, could attract much more foreign direct investments (FDI), while reliable and secure power supply as well as improved infrastructure for river and land logistics as well as a seaport are key factors.