Sustainability has many aspects where environment sustainability is usually considered most important. Think Grain Think Feed in association with Dr Jeetendra Verma connected with two progressive layer farmers, two integrators and a freelance consultant to understand their perspective for Indian layer industry. Read the below excerpts. 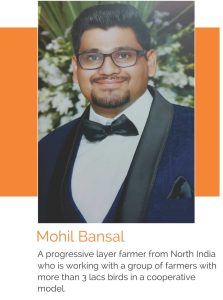 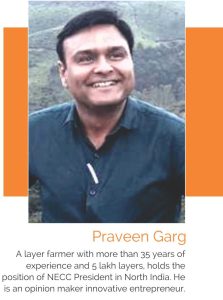 industry by spreading awareness on egg nutrition, it resulted increased consumption. Government should again start endorsing egg. Also, the norms for imports of vaccines and equipment should become more lenient.
Integrators perspective
Business Sustainability during tough times
Dr. Ajay Deshpande: The feed raw materials cost has increased drastically in last one year or so and those who stocked at the right time have the edge. Reserving and stocking the raw materials at least 2-3 months in advance can be a major contributor to business sustainability. Efficiency, getting least cost formulation and maximum performance, is next most important factor contributing to sustainability. 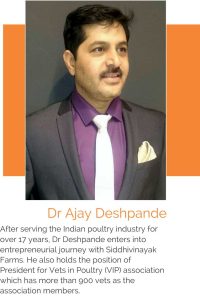 Impact of alternatives and technology intervention
Shortage of maize and unprecedented exports due to ongoing war between Russia and Ukraine have left the industry with no other option than to use alternatives. Even prices of amino acid like DL-methionine have increased by many folds. In December last year, it was available at 290 Rs per kg which is now at 400 Rs per kg. To sustain your business, it is compulsory to plan your inventories. Big players can easily plan 3-5 months of inventory but small business holders should come together to sustain the business.
Policy support
Vets in Poultry (VIP) association has designed a comprehensive strategy and send recommendations to various ministries in Government of India. The country should have a strategy for bird flu like proper vaccination, dividing the country in various zones so that even if one zone is affected with bird flu, other zones can export and awareness programs for busting the myths about bird flu, etc. If we can create export demand then prices will remain reasonably good throughout the year. We just need to mobilize veterinarians, poultry experts and other stakeholders to convince the government.
Also, poultry industry should be united to act unanimously against rumors and educating the consumers. In VIP, we are trying to work in tandem with all industry associations.
Role of Indian Poultry sector in Sustainable Development Goals
Suresh Chitturi: Egg and chicken have a huge role to play in Sustainability Goals of the 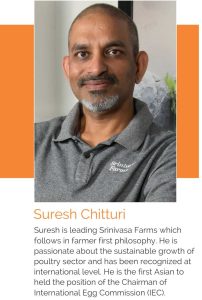 UN like zero hunger, eliminating poverty, and good health & wellbeing. Though there are hardly any studies comparing animal protein to vegetarian protein but as per my understanding the poultry sector must be 2nd or 3rd most sustainable protein. Industry can become net zero in the next 20-30 years.
Canadian systems: A perfect example
In Canada, farmers are working together and are guaranteed minimum profits while they have to follow quota systems. A 3rd party auditor is responsible to decide on a sustainable price for their produce and the retailers and others have to follow a single window system. Even then the farmers also spend on marketing. This might be viable in India too as the minimum support price (MSP) is too political and is neither benefitting the farmer nor the consumer.
Columbia is another example that has gone from per capita egg consumption of 100 eggs to 340 eggs in the last 20 years. Farmers have grown the pie by working and promoting together.
The demand in India for the next 20 years would be phenomenal. We just need to focus on getting a remunerative price for production and keep improving our farms, else this might end up in a few people’s hands which would not be beneficial for the farmer community.
Indian Poultry industry from no-internet to 5G era
Since my childhood days, I have seen my father, Rao Sahab, and Dubey Sahab doing meetings in our drawing-room, so I have a ringside view of the industry. My father used to start his day at 3.30 in the morning coordinating with all zones when even making a telephonic call used to be a task in itself. In 1998, when I joined the business, my father used to have 250000-30000 Rs of telephone bills in a month. Still, in those difficult days they coordinated so well and built NECC.
On another side, today with so much technology and ease, we almost have zero coordination. Condition is such that even if one or two trucks of eggs are reduced in one region in the North it would impact the whole industry and someone in the South would ask to reduce the price because of lower prices there. It doesn’t make any sense that one region hardly capable of meeting 5% demand of the country can impact other regions with much bigger capacity.
In the chicken industry, when there is a price decrease, it reduces for the consumer too. While in the egg industry, there is hardly any data and whenever there is a price reduction even by 2 Paise, no one knows where it goes as the consumer price remains the same.
In nutshell, you shouldn’t expect a system of the 1980s to work in today’s scenario. NECC should consider reinventing its structure. All farmers should come online on a single platform.
Move the eggs away from the farm
A cooperative model where 10 or more farmers can come together to purchase inputs or sell their produce is a great concept but they should demand a better price instead of competing with each other. The matter of the fact is almost 90% of farmers even don’t know their production cost on a day-to-day basis.
I would still advocate the idea to form an FPO at regional level and come down to a single window. The farmer should not talk to the trader rather it should be an intermediator whose performance can be measured on basis of the price he is getting for the farmers. This model can be applied to every 10 lakh egg where this manager is getting a fixed salary and the rest is incentive-based on farmers’ profit. Egg centers should be created where all the eggs should be sent and a single-window is created. This has already been done in Andhra Pradesh for culling birds. Moving the eggs away from farmers to some warehouse, there would be an increase of at least 1 Rs per egg. This model would cost ~3-4 Paise per egg but profitability would improve and producers may dedicate 10 Paise for marketing.
Special announcement for Indian layer farmers
IEC membership fee is subsidized for Indian farmers. Farmers need to support and get associated, more farmers are on-board, more is the power to impact the world for the better.
Expert perspective
Recent industry trends 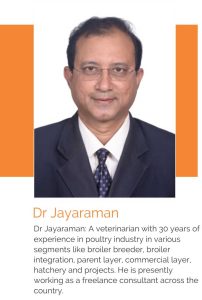 Dr. Jayaraman: The broiler industry is sustainable compared to the layer industry as there is a shifting trend in the pattern, the number of individual broilers farms is dwindling but breeders and integrators are increasing. Initially, when there was a price rise, individual Broiler farmer buying of chicks stopped or reduced but now another integrator starts buying the broiler chicks. So, broiler chick prices are on the remunerative side which is making it viable. But in the case of commercial layers, there is turbulence in terms of prices, the production cost is on the higher side while the selling price is on the lower side. It is seen in a recent scenario in coastal Andhra Pradesh, where initially farmers decided not to sell for two days because of unremunerative prices but then traders decided not to purchase for four days, and because of six days of piled stock, the market crashed. The

model was not sustainable due to overproduction.
There are two factors that caused this scenario, one is overproduction. Earlier the consumption centers were Bihar, West Bengal, and Jharkhand while coastal Andhra Pradesh and Orrisa were production centers, now even the consumption centers started producing. So, the flow has been slowing down but the production has not been reduced. The increasing population in the production centers is going to add strain on the existing flow of logistics. The second is lower consumption, as per my discussion with various producers, after COVID-19 the egg consumption has not picked up in the eastern and other regions.
Role of traders
Traders have a huge role to play like any other industry they are intermediates between producers and consumers. I feel we should introspect. If you do not have a regulated mechanism for expected market realization and production systems, this discrepancy will remain there and we will depend upon the mercy of the market. Probably, traders are also responsible but it is not them alone.
Going forward, the bodies like NECC and others have to include trading bodies in their structure and have better communication only then we can change the scenario. As the industry is changing so we also need to find new ways. Like, earlier North India used to sell chicks and feed to Uttar Pradesh and Bihar. But today, feed companies are putting up their own feed mills in Bihar. To align with this change, North Indian feed producers are tying up vaccine and medicine sellers like an integration model to market the chicks which is difficult to sell. This is basically like a replication of the Kolkata market because of the shifting pattern. Similarly, the layer sector has to find its own solution.
The layer market is growing at ~6% CAGR and the broiler segment at 10-12% CAGR while in the last year the growth in Bihar was 46 %. Likewise, the number of broiler breeders sanctioned in Uttar Pradesh is highest in India, basically, this trend shows these consumption centers will be converting into production centers in a couple of years. This will change the market dynamics and those who will not adapt to this changing scenario will find themselves in a stagnant situation.
Market expansion
In the layer market, the existing players are big players who are marginally expanding and even some markets are shrinking. In the broiler sector, they are expanding irrespective of their size whether small or big. Expansion is happening in terms of processed chicken. Currently, the processed market contributes 6% of total meat sales and expected to grow around 10% in next 5 years.
Two types of players are there in this arena, one is only procuring and delivering like fresh to home, TenderCuts, licious but there are players like Delfrez is changing the market dynamics as they are producing and delivering.