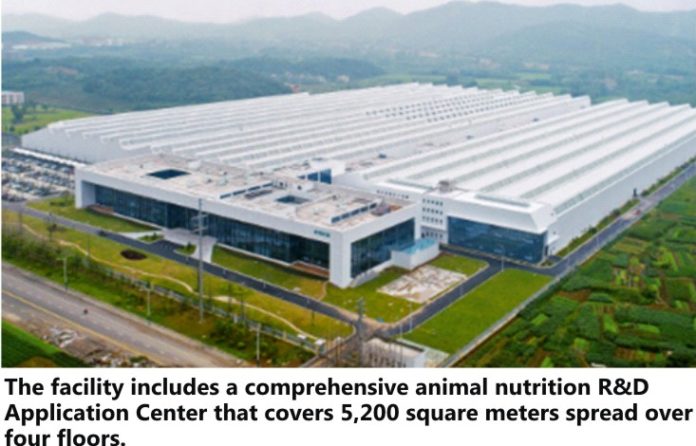 Bühler officially opened its Asia-Pacific Manufacturing and R&D Center on April 26, a ceremony that included customers and stakeholders representing 32 nations from six continents.
The ceremony was kicked off by Liping Shao, general manager of Bühler Changzhou, who told the audience that “the factory covers an area of 26.6 hectares. The 140,000-square-meter workshop will be Bühler’scenter for feed, pet food, animal nutrition equipment and the manufacturing process.”
The ceremony was part of a three-day program that started with a Networking Day and ended with visits to three livestock, aquaculture and premix plants in the region.
The facility includes a comprehensive animal nutrition R&D Application Center that covers 5,200 square meters spread over four floors. It is operated by around 15 Bühler employees operating two pilot plants. One of them is devoted to the development of feed production processing technologies and the other is focused on grain logistic applications. These pilot plants will facilitate basic technology research and development as well as collaboration with customers for customized solutions. In addition, the R&D Application Center will serve as a major animal nutrition training center for customers and Bühler employees.
The green field facility is the latest addition to Bühler’s global supply chain and service network. The manufacturing plant meets the highest Swiss quality standards for the global animal feeds and grain logistic markets.

“Twelve years ago, in February 2006, we started our journey to success here in Liyang when we created Bühler Changzhou,” Stefan Schieber, CEO of Bühler, told the audience. “This investment has been fruitful as today China is a significant growth market for Bühler. By following the old principle that to cross a river you need step from stone to stone, we were able to outgrow the market in China and in Asia consistently every year and become the No. 1 supplier in China and in Asia for the feed industry.”
Throughout the event, Bühler leadership asserted that Asia is a key part of its global strategy.
“This region has seen tremendous growth in the past years, and we are confident we will see further growth,” said Dieter Voegtli, president of sales and services at Bühler. “Also, our strong manufacturing base in China will further expand Bühler’s global supply chain, which is why we have established this brand-new manufacturing facility.”
Shao Liping explained that the facility is not only equipped with the most advanced Bühler machines but is operated with the most modern production management systems.
“To better meet the global feed industry’s need, which is becoming more efficient, ecofriendly and safer, and to meet the Bühler Group’s long-term strategic goals in the feed industry, we have built this smart and eco-friendly factory to provide better service to our customers all over the world,” Liping said.
The programming was filled with talks, half in Chinese, half in English, by six leading figures and thought leaders in the global grain and feed industry.
Over the final hour of the educational sessions attendees had a choice between 10 breakout sessions. Topics included sustainability, grain cleaning solutions, dust explosion risks and countermeasures, feed safety and other topics.
The three-day event ended with visits to three livestock, aquaculture and premix plants in the region. From its vast customer network and many feed lines in operation, Bühler selected three plants to provide its guests profound insights into the Chinese feed industry.
Source: soslandpublishing