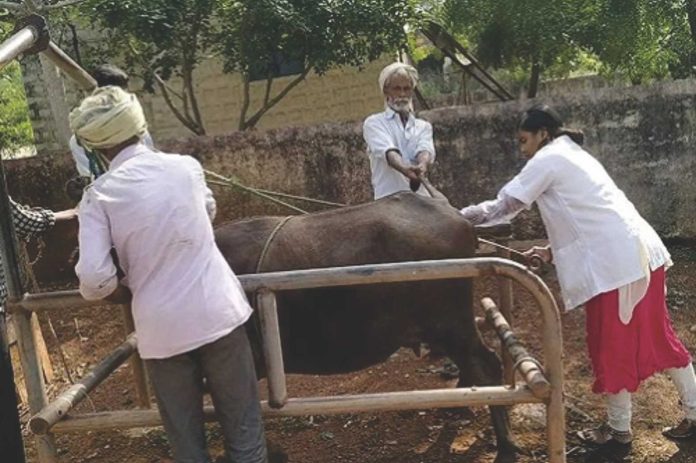 In one of the biggest drives in recent times, the UP government will attempt to conduct 75 lakh artificial insemination in the bovine populace within a span of 100 days.
Coinciding with the 75th year of Independence (Azadi Ka Amrit Mahotsav), the drive will be kicked off on November 15 from Barabanki and will cover all 75 districts in the state till February 25 next year. “We expect good results from the proposed campaign,” said the additional chief secretary, animal husbandry department, Rajneesh Dubey.
Experts said that the project is expected to increase the high milk-yielding bovine population (cows and buffaloes) by around 30 lakh (given the efficacy of the artificial insemination process). This in turn is estimated to increase milk production in the state from the existing around 90 lakh litres per day to 150 lakh litres per day – that is a rise of around 60 lakh litres per day.
Uttar Pradesh happens to be the highest milk producer in the country, accounting for 16% of the total milk produced nationally. However, the per capita milk availability in the state (384 grams) is less than the national average of 400 grams. “The drive is expected to ramp up milk production in the state and make it self-sufficient,” said Arvind Singh, chief executive officer, Livestock Development Board (LDB). He said that the campaign will entail free service at the doorsteps of the animal owner. is part of ‘Rashtriya Gokul Mission’ which was launched in December 2014 with an aim of enhancing milk and productivity of the bovine population along with a focus on the conservation and development of indigenous breeds. During 2019-20, the NAIP was conducted nationally in 605 districts having less than 50% artificial insemination coverage. This primarily covered 300 villages in the chosen districts. Under the programme, more than 50 lakh bovine were inseminated with semen of high genetic merit bulls.
Experts said that AI is one of the key strategies to increase the productivity of bovines by upgrading their genetic potential. At present, the average artificial insemination coverage is around 30%. The rest of the 70% are either left un-bred or bred with scrub bulls with unknown genetic merit. “Low artificial insemination indicates the poor implementation of the breeding programme,” experts said.
Hence, it was decided to carry out artificial insemination in a mission mode in districts having less than 50% coverage. This included 113 aspirational districts.
Source: Times of India