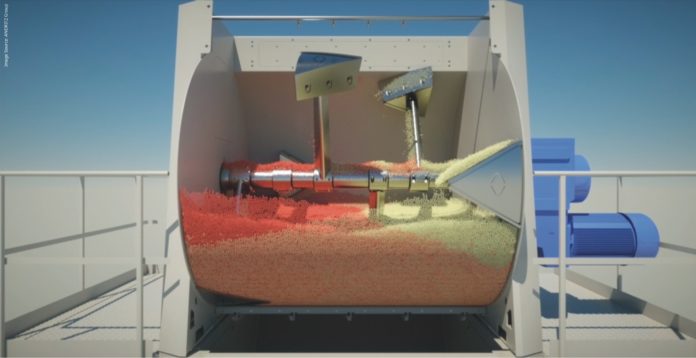 Introduction
Feed manufacturing consists of series of steps or processes, in which individual ingredients are combined into a homogenous mix, further processed as per customer’s desired requirements (coarse dairy rations, pellets, flakes, etc.), and packaged for onward delivery.
The one of the most essential and critical operations in the process of feed manufacturing is mixing. Where the individual ingredients are combined into their proper ratios and uniformity distributed throughout the entire mass, yet it is frequently given little consideration. Creating a completely homogeneous blend is the objective in mixing; if the ingredients are not properly mixed, then the nutritional quality cannot be assured.
The mixer performance can be affected by other factors such as particle size and shape of the ingredients, ingredient density, static charge, sequence at which ingredients are added, worn, altered, or broken equipment, improper mixer adjustment, poor mixer designed, and cleanliness.
Receiving daily ration of nutrients that animal from a feed may vary from time to time due to a number of reasons. The sources of variation will probably cause variation in the day-to-day level of nutrition received by an individual animal. The nutrient variation in feeds is most likely to occur due to the following reasons:

Poor mixing
In order to confirm that the mixing is done properly, the major dry ingredients are added first, from largest to smallest. The last dry ingredients to be added are the minors—composed of the premixes, which are usually vitamins, minerals and other additives. After all dry ingredients are added and allowed to mix, the operator proceeds to add the liquid ingredients. Understandably, mixing is then one of the most critical steps in feed manufacturing process and, if not done correctly, it can have adverse effects on the nutritional and physical quality of the finished product or pellet. 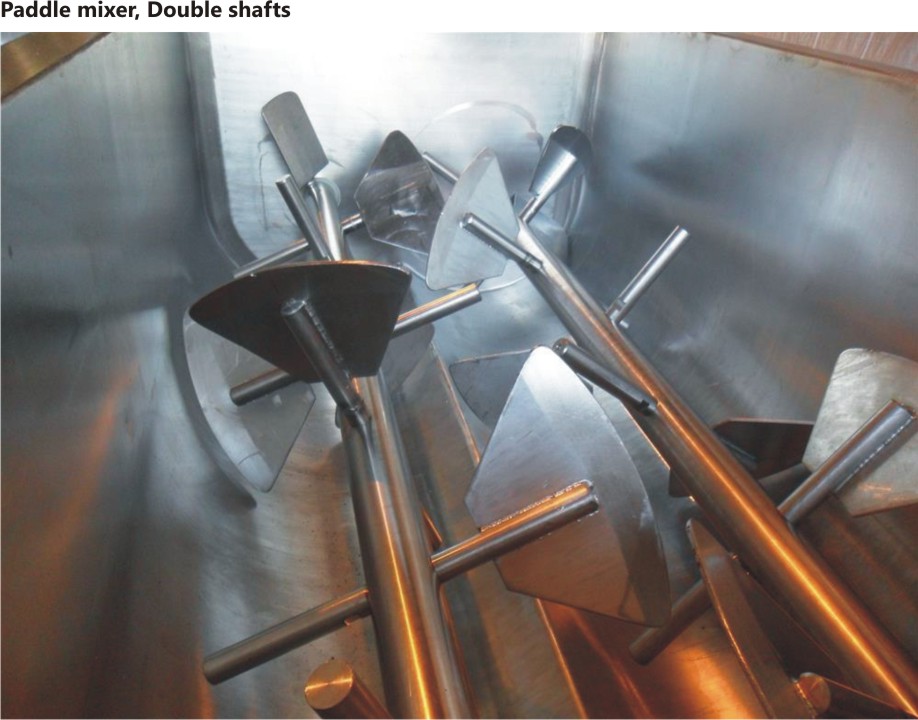 A complete homogeneous mix will produce uniform pellets. Poor mixing can have an adverse effect on the pellet quality. If pelleting aids, such as a binder, are not added in the correct sequence, their distribution in the meal will be inadequate to produce pellets with the desired hardness or durability. In this item, excess fines will be produced and the additive will be lost. The direct impact of fines will be on costs, as they increase the shrink and re-process costs in the process. The fines that are recovered in the process increase cost because they need to be re-processed. Most of the time, the fines are recycled back to the pellet surge bin; however, if excessive fines are put into the pellet mill, the pellet quality will continue to degenerate as the fines tend to lose their binding capacity.
Incomplete Mixing
Incomplete mixing occurs when one or more ingredients are not present in a feed sample taken at mixer discharge in the same percentage as the percentage of the ingredients used to charge the mixer. 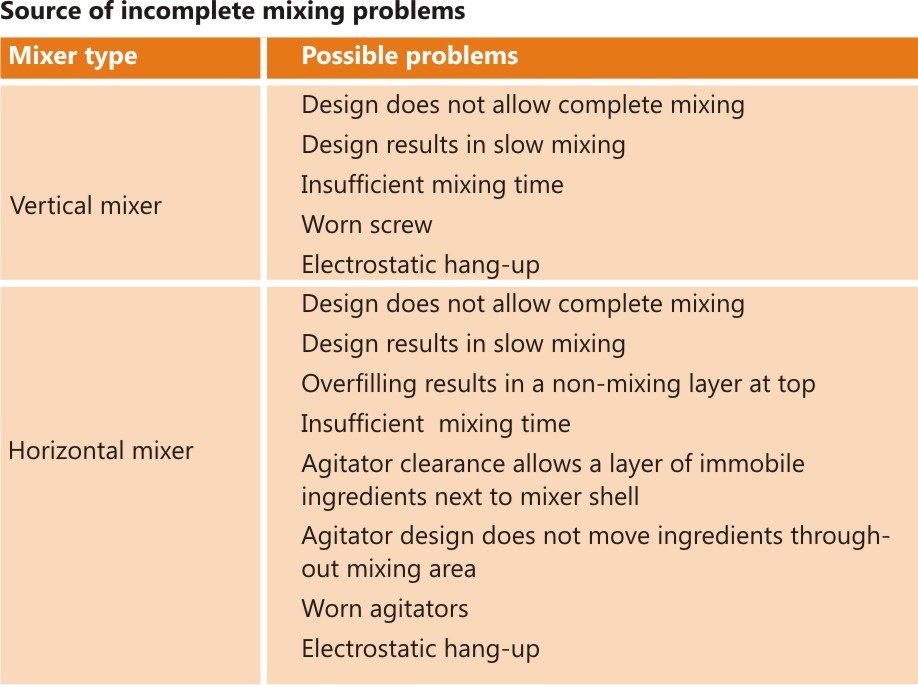 Incomplete mixing can often be corrected by adjustments of mixers or by replacing components that are worn or otherwise inadequate for the purpose. An example is adjustment of mixer ribbons to reduce the space between the ribbons and the mixer shell. Another example is the replacement of worn or damaged ribbons, paddles, or screw conveyors. Procedural changes may improve feed mixing. Factors affecting the ease of mixing a component in the whole composition include the sequence of compounds and additives inside the mixer.
Additions of the small volume materials to part of the protein source early in the mix cycle allows more time for complete mixing to occur. Improvement of feed mixing uniformity is associated with increased mixing time. Small volume items such as drug or mineral premixes should be added directly to the mixer rather than through an auger system. If added through an auger, it should be followed with sufficient corn or protein to flush it into the mixing chamber.
Loading over or under capacity of mixer
Once the batch size is a derived, it should be maintained as a constant. Mixing performance affected increase and decrease of batch size from the derived value will over load or under load the mixer.
Ensuring proper mixing
Nutritional imbalances can happen if minor ingredients (vitamins, minerals, antibiotics, pelleting aids and other additives) are not homogeneously distributed in the mixed meal. The imbalances can be in both directions—one of nutrient deficiency if some ingredients are not mixed, and one of excess or even toxicity (minerals, vitamins, antibiotics) if ingredients are in excess. Testing at least every 6 months for ensure suitable mixing quality, is necessary. The mixer test measures the coefficient of variation (CV) which is the standard deviation (σ) divided by the mean (µ) multiplied by 100. The mixer is adjusted at different time intervals, and the one with the least amount of mixing time that is below 10% CV should be selected. The mixing time can vary with formulation type. Therefore, it is essential that a mixer test be achieved for each formula type. Mixer efficiency can be affected by the amount of accumulation on the paddles and ribbons. The ingredient physical properties (density, particle size, hygroscopicity and electrostatic charges) can buildup in the discharge gates that inhibit them from tightly closing, and cause wear of the paddles and ribbons. It is consequently important to ensure that the mixer is kept clean and appropriately functioning to ensure a homogeneous blend and optimum pellet quality.
by Amir Attar, Alireza Abbasipour, Samira Hassanpour – New Millennium Feed Processing Co. 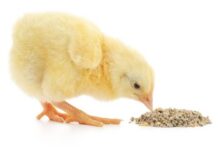 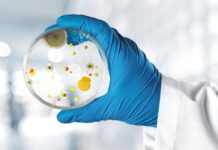 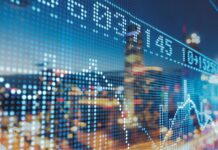